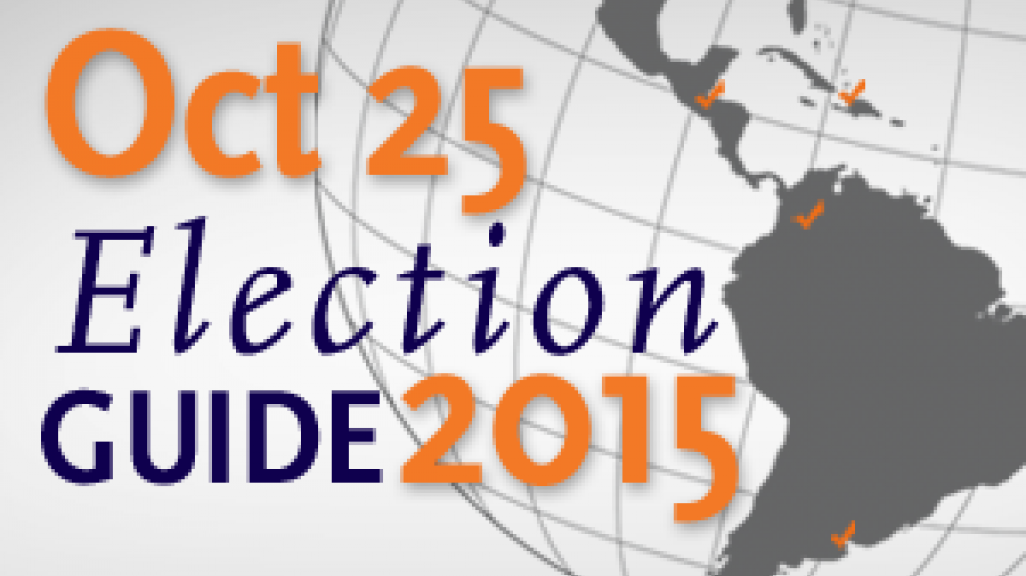 On October 25, 2015, four countries across Latin America and the Caribbean held either local or presidential elections. Click through the tabs to learn about what's at stake in each vote.

On October 25, Argentina held general elections to choose a new president, vice president, 154 congressional seats, and governorships in 11 out of 23 provinces—including Buenos Aires. The presidential race had three frontrunners: Daniel Scioli of the Victory Front coalition, Mauricio Macri of the Let's Change coalition, and Sergio Massa of the United for a New Alternative coalition. 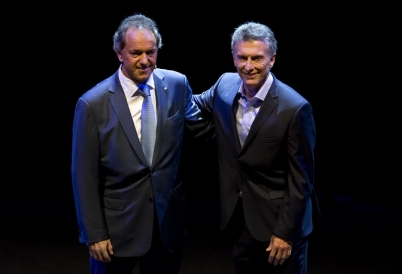 Mauricio Macri and Daniel Scioli will face each other for a historic second round on November 22. 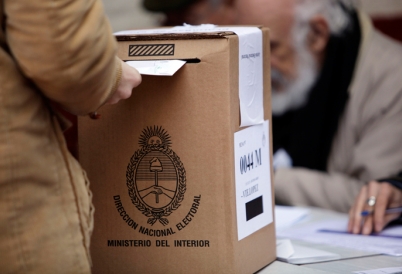 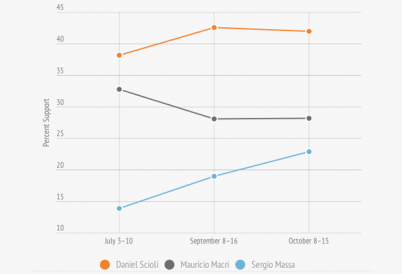 In Argentina's October 25 presidential race, frontrunner Daniel Scioli isn't battling his nearest competitor so much as he is a set of numbers: 40 + 10 or 45.

"I aspire to be the president of investment," said Daniel Scioli, Buenos Aires province’s governor and frontrunner presidential candidate representing the Victory Front coalition. He said Argentina’s next chapter should be focused on innovation, equality, and investments. For his rival Mauricio Macri of the Let's Change coalition, the next government should focus on four themes: education, rule of law, transparency, and jobs. He said that all Argentines should have access to the same opportunities and a state that is not held hostage by politics. Sergio Massa, presidential candidate for the coalition United for a New Alternative, said the government’s first challenge will be to restore credibility in its statistics, and that important sectors such as energy and technology should be for investments.

The top presidential candidates in the race for Argentina's presidency joined AS/COA's annual conference in Buenos Aires, sharing their perspectives on their country's current state and future prospects. This was their first gathering since the primary elections earlier this month. The candidates explored what they considered priorities for the country, commenting on themes ranging from electoral transparency to which sectors would help Argentina’s economy to the short and long-term goals for the next government. Elections take place on October 25.

Macri said that his goal would be to build a smart government by fighting poverty, recovering respect for institutions, and creating opportunities for development and jobs.

Massa said this election period is an opportunity for the country to recover dialogue about what is best in the future, creating a path for development. He spoke about jobs as the “most important tool” to help the economy and said new energy infrastructure in the country would attract investments.

Massa added that the country’s Central Bank should have more autonomy and that his government would look to South America and Mercosur to expand Argentina’s performance in foreign markets.

Scioli remarked that, in the past years, the priority for Argentina’s government has been improving social inclusion, noting the country was a leader on expanding its middle class and creating small- and- medium-sized enterprises. “Now we can make plans for the next ten years,” he explained, saying the country is ready to boost industry.

Results from the country’s primaries, known as the PASO, forecast a tight race ahead of October 25 elections.

On August 9, Argentines chose who will be on the ballot for president in this year’s national elections on October 25. Nearly 32 million people were eligible to vote in Sunday's Open Simultaneous, Mandatory Primaries, or PASO, and three leading political coalitions garnered almost 90 percent of the votes. The three frontrunners for the presidency are Daniel Scioli of the Victory Front coalition, Mauricio Macri of the Let's Change coalition, and Sergio Massa of the United for a New Alternative coalition.

With 97.8 percent of the votes counted by the National Electoral Direction, Buenos Aires Governor Daniel Scioli came out as the winner of the primaries, getting 38.5 percent of the votes. Scioli was the sole candidate from the party of President Cristina Fernández de Kirchner, who has an approval rating of nearly 50 percent. Scioli was the vice president of Fernández de Kirchner’s late husband, Néstor Kirchner, from 2003 to 2007. Carlos Zannini, currently a member of the president’s cabinet, is Scioli's running mate. Speaking at Luna Park in Buenos Aires on the night of the PASO, Scioli dedicated his victory to Néstor Kirchner and said the numbers demonstrated Argentines’ support for “the government’s foundation.” Scioli explained he will maintain what needs to be maintained, deepen what needs to be deepened, and change what needs to be changed “with my own style,” he added.

Second place went to Mauricio Macri, who had 24 percent of total votes and defeated two other competitors from within his own coalition, Cambiemos, or Let's Change. Among those who voted for the coalition, Macri had 80 percent support, against 11.5 percent that went to Ernesto Sanz and 7.8 percent to Elisa Carrió. Macri, who represents the opposition to the ruling party, is the current mayor of Buenos Aires, the largest electoral pool of the country. His campaign has been critical of the government’s economic policy but has backed off from criticizing Fernández de Kirchner's popular policies to expand welfare, says The Economist. Macri’s election results puts him at a favorable situation for the upcoming October 25 vote. After the PASO, the candidate said he could get the 45 percent of votes needed to win the election outright and avoid a runoff, though some doubt that.

Following with 14 percent of the votes, Sergio Massa took third place, representing the coalition United for a New Alternative (UNA). The mayor of Tigre, a town on the outskirts of the capital, Massa started exploring a presidential campaign on June 2013 when he left the ruling party. Massa was once Fernández de Kirchner’s government chief of cabinet between 2008 and 2009. His results were lower than predicted, but he defeated fellow UNA candidate José Manuel de la Sota by garnering two-thirds of votes cast for the coalition. Pollsters had projected an even lower result for him in the days leading up to the PASO, and Massa said his better-than-expected results showed the progress of his campaign, and the mandate going forward.

Why Is the PASO Important?

Forty percent is the magic number presidential candidates typically want to get in the PASO to be confident going into the next round of elections. In Argentina, a candidate can be declared president if he or she receives 45 percent of the vote in the general election, or, alternatively, 40 percent with at least a ten-point margin over the runner-up. In 2011, Fernández de Kirchner had 50 percent of the votes during the PASO. With much disagreement among pollsters, the PASO is an essential opportunity for candidates to test their strategies and public perception. “The PASO elections are a true thermometer for what each candidate’s chances are going into October,” says Juan Cruz Díaz of Cefeidas Group.

Considering the difference between the frontrunners’ numbers, the PASO this year demonstrated candidates could have a tight race ahead of them.

Three other candidates—Margarita Stolbizer, Nicolás del Caño, and Adolfo Rodríguez Sáa—got more than the required 1.5 percent of votes in the PASO to be able to run for president in October. Five other coalitions participated in the PASO but did not hit the mark to be on the ballot. As Argentina’s 2009 electoral law requires, the PASO is open for everyone living in the country that is eligible to vote, and this is the second time Argentines’ votes will determine the presidential ballot since the electoral reform.

Voter turnout was around 72 percent for this year’s PASO, down eight points from 80 percent in 2011. The low turnout was partially blamed on heavy rains on Sunday, which forced polling sites to be moved in 28 districts around the country. This year, nearly one million 16- and 17-year-olds were eligible to vote for the first time in the PASO, representing nearly 3 percent of total eligible voters.

Who Else Was on the Ballot?

Argentines also decided who the main candidates for the government of the province of Buenos Aires would be. More than 40 percent of the votes went to the Victory Front and Aníbal Fernández, who will face María Eugenia Vidal of Let’s Change, UNA’s Felipe Solá, the Progressive Front’s Jaime Linares, and Workers’ Leftist Front candidate Néstor Pitrola. Voters also elected 130 representatives to the lower house, 24 senators, and, for the first time, 43 regional and national Mercosur parliamentary representatives in this year’s PASO.

Watch the candidates speak at past AS/COA events:

In Colombia's October 25 local elections, voters elected governors for all 32 departments, along with 1,102 mayors and 12,492 other municipal posts. Although not on this ballot, looming large over these elections were the ongoing peace talks between the government and the Revolutionary Armed Forces of Colombia (the FARC), which divided public opinion, parties, and candidates along pro- and anti-peace process lines. 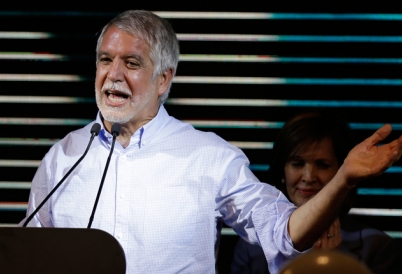 It may not be a surprise that Enrique Peñalosa will be Bogota's next mayor, but Federico Gutiérrez's win in Medellin was an upset. 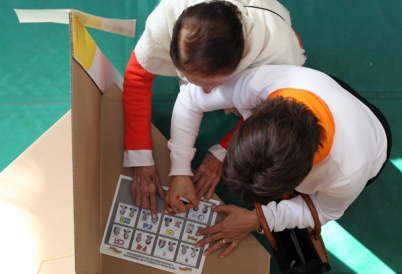 Days before Colombia’s local elections, we give a rundown of races in Medellin, Cali, Cartagena, and more.

Enrique Peñalosa has a comfortable nine-point lead per Gallup going into the October 25 race for Colombia’s second-most powerful position.

Hemispheric Updates
Update: Who's Leading the Race for Mayor of Bogota?

The race for mayor of Bogota, often called the second most powerful position in the country, is a nail-biter.

The first round of Guatemala's election, held on September 6, took place days after the sitting president stepped down over a customs fraud scandal. Then, on election day, a former poll frontrunner not only failed to win, but was edged out of the runoff by fewer than 0.2 percent of votes. With no candidate earning the 50-percent-plus-one needed for a first-round victory, former comedian Jimmy Morales beat ex-First Lady Sandra Torres by a huge margin in the October 25 runoff. 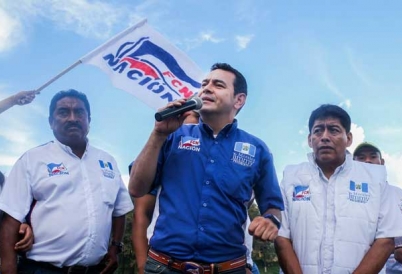 The ex-comedian and political outsider beat a former first lady by 35 points in the October 25 runoff, but he'll face a divided Congress. 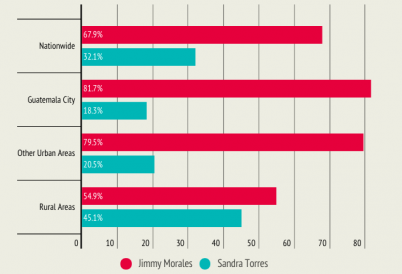 The ex-comedian [or “political outsider”] joined the race late, but polls give him a formidable lead ahead of Sunday’s runoff vote. 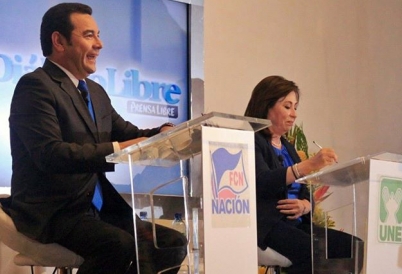 The former comedian’s positioning as an outsider is proving tough for Sandra Torres to beat, both in the polls and in debates. 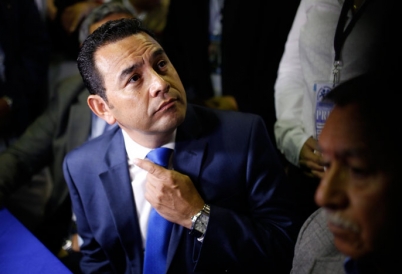 On September 6, a former comedian seen as a political outsider took the lion’s share of votes but failed to stave off a second round. 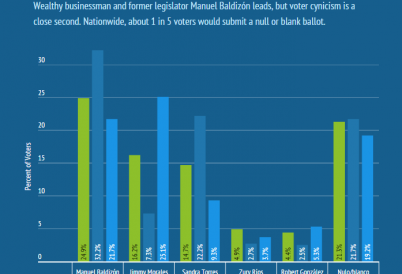 Cynicism may be running high among Guatemalan voters amid a presidential impeachment process, but the September 6 general elections will go on.

Since January, President Michel Martelly has ruled by decree due to the term expiration of two-thirds of Senate seats and the entire Chamber of Deputies. Though legislative elections were held on August 9, widespread violence at polls invalidated many results and votes were recast in 25 out of 119 constituencies on October 25, the same day as the presidential vote. 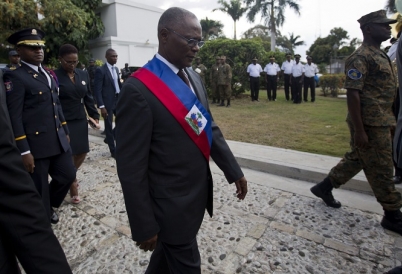 The April 24 election is tabled until another review of first-round results, while international donors threaten to withhold aid. 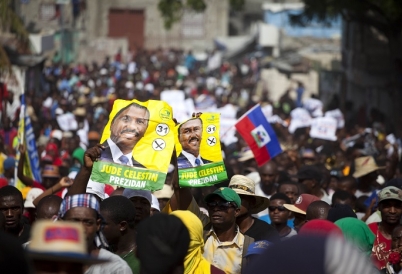 Here are three things to know about the postponement of the January 24 vote. 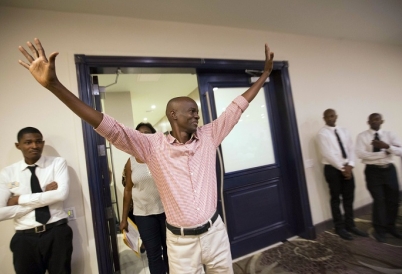