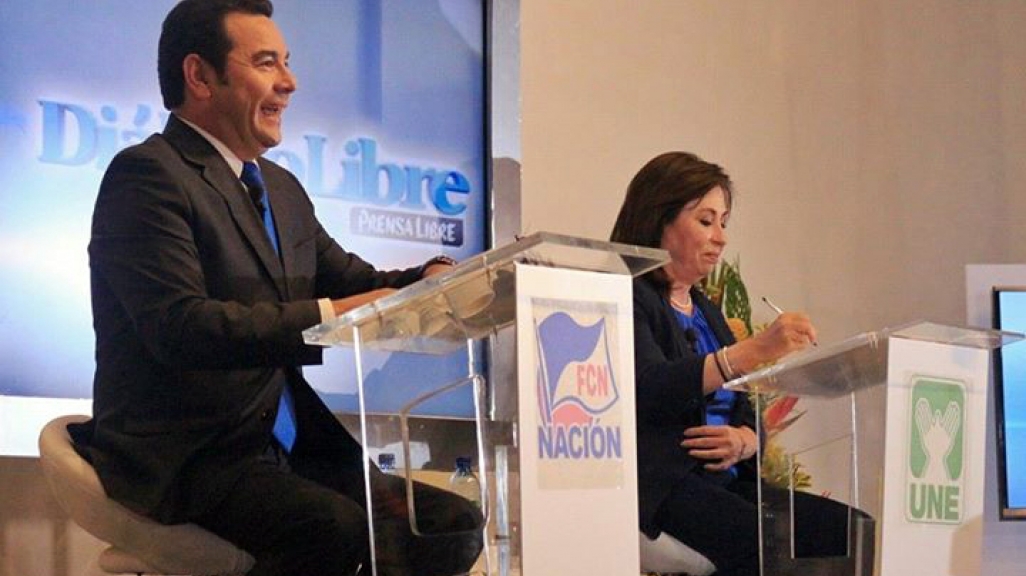 The former comedian’s positioning as an outsider is proving tough for Sandra Torres to beat, both in the polls and in debates.

If a recent poll is to be trusted, Jimmy Morales could have the Guatemalan presidency in the bag. The comedian-turned-candidate won the country’s first round of voting on September 6, while his rival Sandra Torres squeaked into the runoff when she beat the third-place finisher by just over 0.1 percent. Now a survey conducted by Felipe Noguera gives Morales a whopping lead with 64.0 percent of voter intention compared to 20.6 percent for former First Lady Torres. And the firm’s polls, carried out over the month of September, show Morales’ lead growing.

The gap between the candidates defies some observers’ expectations. Morales represents the National Convergence Front (FCN-Nación), a party founded by military veterans, while some of his associates have been linked to war crimes carried out during Guatemala’s violent civil conflict. Sandra Torres, a center-left candidate representing the National Union of Hope (UNE), seemed to some like more of a departure—and stronger option—from Morales than did Manuel Baldizón, the right-leaning candidate Torres edged out in the first round.

However, with a huge corruption scandal forcing the sitting president out of office last month, Morales, a relative newcomer running on a platform of “Neither corrupt, nor a thief,” appears to be riding a wave of public discontent with a tainted political class. Torres, a former first lady whose family members have been linked to corruption and organized crime, may be seen as part of that establishment.

Of note: the Felipe Noguera poll forecasts a big win, but its last survey before the first round didn’t get the outcomes quite right. The poll put Baldizón in first place with Morales two points behind and Torres 12 points behind in third.

On October 5, Morales and Torres participated in their first head-to-head debate in the runoff election, offering some more platform details in a race that critics describe as scant on specifics thus far. Hosted by the British Embassy in Guatemala and daily Prensa Libre, the candidates took questions from university students in the audience as well as from social media. Morales used the occasion to call the country’s 1 percent royalty tax rate on mining operations “an injustice;” efforts to raise the tax have failed in recent years. Guatemala has the lowest tax revenue base of any other country within the BB credit rating category at 11.5 percent of GDP in 2014, per Fitch Ratings. He also highlighted his role as an outsider bringing change to a corrupt system, calling for clearer legal rules for investors, open bidding processes in government contract awards, and more transparency in social programs.

Torres, on the other hand, said that the country should be prudent in this election season and “take things seriously” rather than upset the status quo. And while analysts gave Morales the win in the debate overall, Torres did get in at least one barb: if she wins, she said, she would consider inviting Morales to be a part of her cabinet. “He’d make a good minister of culture and sports,” she said.