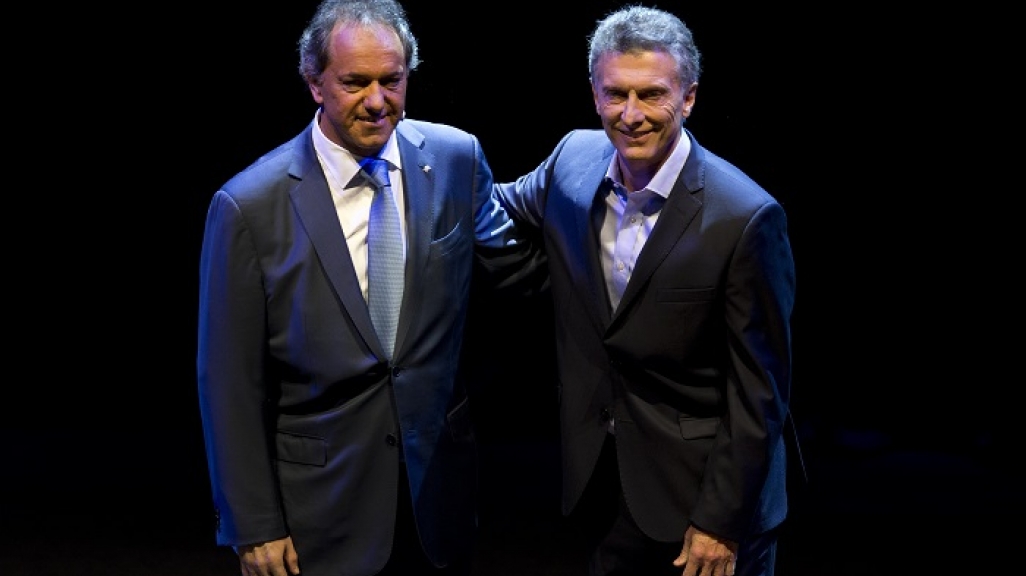 Daniel Scioli and Mauricio Macri at the debate. (Image: AP)

Argentina Update: Debate and Polls before the Runoff Vote

Mauricio Macri and Daniel Scioli will face each other for a historic second round on November 22.

On November 22, Argentines head to the voting booth in the country’s first-ever presidential runoff election. There are more than 32 million registered voters in the country and, with compulsory voting, presidential election turnout sits around 80 percent. In the runoff, voters will cast their ballots for either Daniel Scioli, of the Victory Front coalition, and Mauricio Macri, of the Let’s Change coalition. Scioli’s vice presidential running mate is Carlos Zannini, and Macri’s is Gabriela* Michetti. The election comes after 12 years of kirchernismo, following the successive administrations of Néstor Kirchner (2003–2007) and his wife, Cristina Fernández de Kirchner (2007–2015).

What the Polls Say

Heading into the October 25 first-round presidential vote, Scioli, a vice president during the administration of Nestor Kirchner,** led most polls and some thought he was in a position to win that race outright and avoid a runoff. On Election Day Scioli did win that vote, but by a smaller margin than many predicted; he edged out Macri, mayor of Buenos Aires, by 2.5 points in the six-candidate race. Since then, Macri has picked up some 48.7 percent of support from those who voted for the other four candidates who did not make the runoff—including 59 percent of third-place candidate Sergio Massa’s supporters—according to a Poliarquía poll taken November 9 and 10 and published in La Nación. Scioli currently trails Macri in eight of nine national polls conducted in the run-up to Sunday’s vote.

The winner of Sunday’s election will be sworn into office on December 10.***

The two candidates squared off on November 15 at the University of Buenos Aires’ law school. The event marked the first time the two candidates met each other on the debate stage, after Scioli elected not to participate in the previous one held ahead of the first round.

The November 15 debate generated close to 1 million tweets under the hashtag #ArgentinaDebate, per the on-screen counter. Over two-thirds of Argentine viewers said the debate reinforced, but did not sway, their choice of candidate.

In the discussion on economic proposals, Macri said that after four years of slow growth for the Argentine economy, the way forward is to “to expand, not adjust” it. He insisted on the need to restore confidence to promote investment and growth, while reining in inflation. Scioli responded by cautioning that Macri’s proposal to remove capital controls and leave the floating exchange rate in place would lead to devaluation of the Argentine peso. He argued that a combination of business, workers, and public policy would lead to progress, while vulture funds, the International Monetary Fund, and the proposals of his opponent would be a retreat to the past.

The candidates next turned to education and early childhood development. Scioli questioned Macri’s commitment to public universities, as well as investment in science and technology. Macri countered that 60 percent of patients to the capital’s hospitals came from the Buenos Aires province (of which Scioli is governor), where he said health facilities were short on funds and equipment. The two spoke about the need to improve the infant mortality rate, expand childcare coverage, and increase teachers’ pay.

In the debate’s second half, the candidates discussed threats to security from drug trafficking and spoke of the need to expand public health offerings for both recovering addicts and shelters for battered women. “A drug trafficker is a criminal, a public security problem, and the addict is sick; it’s an issue of public health,” said Scioli.

In the closing topic of democracy and foreign policy, Macri underscored the importance of judicial independence, transparent elections, and a government that serves the people while working in tandem with the private sector. Scioli countered: “Democratic strengthening comes from a socially active government.”

**Editor's note: The original version of this article stated that Daniel Scioli was vice president for the government of Cristina Fernández de Kirchner. He served as vice president from 2003-2007, during the administration of her husband, Nestor Kirchner.

***Editor's note: The original version of this article identified December 11 as date of inauguration of the new president. The date is December 10.