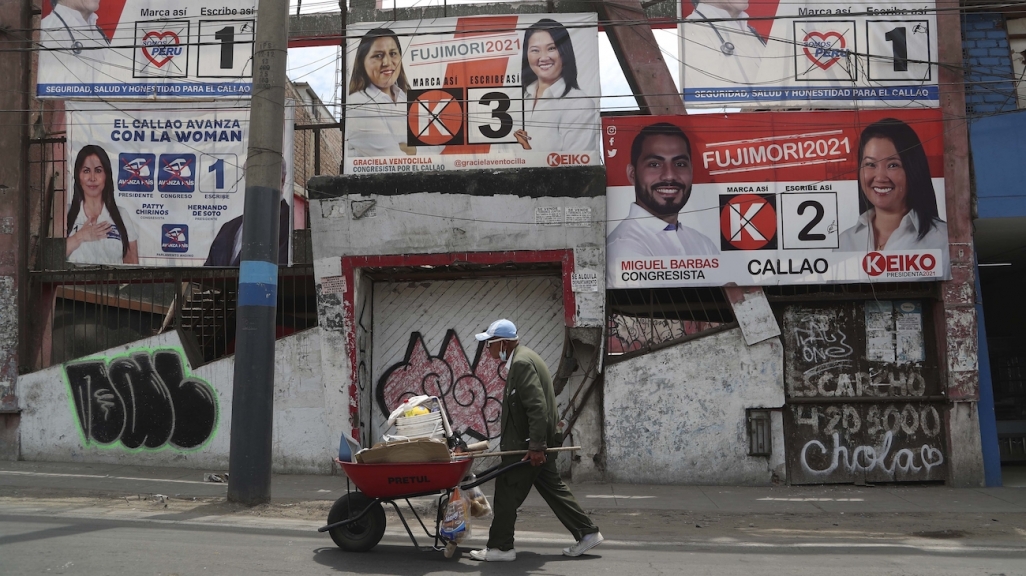 A man walks by campaign posters in Lima. (AP)

The April 11 elections give wary voters a chance to pick new leaders amid both the pandemic and political tumult.

On April 11, Peruvians will vote for president, two vice presidents, all 130 members of the unicameral Congress and five representatives to the Andean Congress, all to five-year terms. If no presidential candidate wins an outright majority, the top two tickets will compete in a runoff on June 6. New officials will be inaugurated in July.

The 2016–2021 term was marked by institutional showdowns between the executive and legislative branches. Only members of the Andean Congress served all five years without interruption. During this period, Congress forced the resignations of two presidents—Pedro Pablo Kuczynski, who was one originally elected in 2016, and his successor, Martín Vizcarra. In 2019, Vizcarra dissolved Congress. The current legislative session began in March 2020 after special Congressional elections, and the current president, Francisco Sagasti, has served on an interim basis since November 2020.

On top of the political unrest, the Peruvian economy contracted 12.9 percent in 2020—among the worst in Latin America—and the country reported the second-highest COVID-19 death rate per capita in the world at the end of the year. The 2021 elections give an inchoate Peruvian democracy an opportunity to lay the foundation necessary to rebuild from both the pandemic and the political tumult.

Note: This article was originally published on March 19 and later updated as new polling became available.

More than 25 million Peruvians will be eligible to vote this year, of whom 30 percent are under 30 years old. Voting is mandatory for adults ages 18 to 70 in Peru. Additionally, the elections authority, known as the ONPE, will call up just over a half million people to serve as poll workers. The penalties for not voting range from $6 to $24, and failure to show up for poll site duty results in a $60 fine.

Thus far, the election is proceeding on schedule amid the pandemic with some adjustments. The ONPE increased the number of polling sites from the typical 5,000 to 12,000 in order to facilitate better social distancing. The country is a long way from reaching any type of herd immunity that would make gathering to vote safer: as of March 12, Peru had administered just under one and a half COVID-19 vaccine doses per 100 people, less than half the rate of Mexico, and slightly ahead of Colombia.

There are close to 20 presidential tickets in the 2021 field, and candidates include one former president, Ollanta Humala (2011–2016), and the current president, Sagasti, who’s a candidate for vice president on the Purple Party ticket. Here, we preview the candidates who were polling at above 5 percent in Ipsos Peru’s two March sample ballots, presented in order of how they placed in the latest one, starting with the leader.

The Popular Action (AP) party head had momentum earlier in the year, but his momentum in polls appears to have slowed in the final weeks of the campaign. Originally a lawyer and radio host from Puno in Peru’s south, he served in Congress from 2000 to 2019. Lescano, 62, tends to be more economically populist, calling for a more equitable distribution of Peru’s mining revenues and a “deglobalization” of the economy, while remaining socially conservative. He also wants to expand access to credit by requiring private banks to lower “abusive” credit rates, and reduce energy prices in part by building a natural gas pipeline with Bolivia.

One of the big questions will be how much Peruvians will support the candidate from the 64-year-old party, when dissatisfaction with the traditional political actors is high. AP is also hampered by the actions of the deeply unpopular party member Manuel Merino, who last fall led the charge in Congress to oust Vizcarra. He then served as interim president for six days during which he oversaw a lethal crackdown by police on protestors, resulting in two deaths, hundreds of injuries, and several dozen disappearances.

De Soto, 79, is an internationally recognized economist, author, and expert on the informal economy, social inclusion, and the property rights of the poor. Currently the president of the Lima-based think tank Institute for Liberty and Democracy, de Soto is running on the Advance Country party ticket, whose platform emphasizes social, economic, environmental, and institutional integration. During Peru’s conflict with the Shining Path, his “pro-capitalist intellectual crusade”—as the Economist put it—made him a target of the guerrilla group, and he survived no fewer than three attacks on his life. He was a close and influential adviser to Alberto Fujimori in the 1990s and later endorsed and advised his daughter in her two unsuccessful presidential bids. He got wrapped up in the vacunagate scandal after flying to the United States two times in March to be vaccinated against the coronavirus. Though he’s worked closely with the executive and legislative branches for decades and was appointed to the Board of Peru’s Central Reserve Bank in the late 1970s, this is his first run for public office.

Mendoza, 40, is back for her second bid for president, although this time her corner of the electorate is more crowded. In 2016, she had most of the left to herself and placed a close third, missing the runoff by less than 3 points. This year, Lescano not only cuts into her supporters from the center-left but also from the southern part of the country where they are both from. In a relatively conservative field, she’s the most progressive of the major candidates—the only one to support legal abortion and same-sex marriage. The Together for Peru coalition candidate has made a proposal to rewrite the constitution and another to overhaul the pension system the cornerstones of her 2021 campaign.

National Victory party candidate Forsyth, 38, is now a middling candidate after being the longtime early leader in the 2021 race, thanks in part to his high name recognition as a former member of Peru’s men’s national soccer team and reality TV contestant. Since walking off the pitch, Forsyth has made a name for himself as a pro-business, corruption-fighting city councilmember and as mayor of La Victoria, a large municipality in Lima. The only candidate under 40, his relative youth is a double-edged sword: he brands himself as the face of a new generation, yet he has a shorter track record and his platform lacks the policy specifics of other candidates.

Ever since 1994, when she sided with her father after her mother accused him of abuse and torture, Keiko Fujimori, 45, has pegged her political status and brand to that of her father, former President Alberto Fujimori. In an interview last month, she said that she’d offer a demodura—a play on democracy and the heavy-handed/hardline (mano dura) authoritarian ruling style her father was known for.

Fujimori was the runner-up in both the 2011 and 2016 presidential runoffs. In the last three years, she’s been arrested and put in pretrial detention twice, on charges that include money laundering and operating a criminal organization within her party, Popular Force. While she is currently out of jail, her trial is ongoing, and on March 11, a prosecutor sought a 30-year sentence for her on charges of money laundering.

The Popular Renewal, 60, candidate favors deregulation and reducing the size of the government and is a major critic of Vizcarra and Sagasti. After polling at 0 as recently as January, he quickly rose to 8 percent support in Ipsos Peru’s March survey, and his momentum makes it within the realm of possibility that he could surge past a waning Forsyth. A member of the Opus Dei Catholic group, he accordingly holds ultra-conservative ideas about abortion, same-sex marriage, and capital punishment.

An elementary school teacher from Peru’s Chota northern interior region, Castillo, 51, is a late gainer in some final polls, although it’s unclear if he’s truly in contention to make the runoff. The candidate for the Free Peru party supports rewriting the constitution, restructuring the pension system, and nationalizing the gas industry. After a failed mayoral candidacy a couple decades ago, this is his first run for the presidency. His humble background is apparently one of his strengths: his supporters are more likely to say “he understands people like us” than is the case with any other major candidate.

A popular yet controversial former army general, Urresti, 64, is running on a platform centered around security with the We Can Peru party, notably proposing to increase the nation’s police force from 115,000 to 180,000 officers. After serving as interior minister during Humala’s government, he briefly fielded a run for president in 2016 and for mayor of Lima in 2018 before becoming a congressman in March 2020. He currently is on trial for the murder of a journalist in 1988, charges he was acquitted of three years ago but that the Supreme Court later overturned.

If the last five years made anything painfully clear, the executive must have a working relationship with Congress, and to that end, the president will be greatly helped if his or her party has a substantial representation in Congress. After Vizcarra legally dissolved the body, the special elections held in January 2020 reset the allocation of seats. Most notably, Popular Force lost its long-held majority, dropping from 73 seats to just 15, and a previously unknown “messianic” conservative party known as FREPAP came from seemingly out of nowhere to also win 15 seats. Popular Action, meanwhile, became the biggest party in Congress with 25 seats, followed by Alliance for Progress with 22.

No matter the results of this election, alliances will likely be necessary in the upcoming session to have any type of governability, and Lescano’s two decades as a member of the legislature and his party’s solid representation bode well for him on this front if he wins. Of note, Vizcarra is running for a seat in Congress himself this time around.

In Peru, voters pick a party’s candidate list, and the party must win at least 5 percent of the national vote in order to gain representation in Congress, or alternatively seven seats in more than one of Peru’s 27 electoral districts. If parties form a coalition, the coalition must receive one additional percent of votes over 5 percent for each party after the first.

In a national study published in 2020, 70 percent of Peruvians said corruption was the top problem of the past half-century. Even in 2020, it was still the top-ranked problem ahead of the pandemic. Corruption continues to cast a shadow in 2021, most recently through the so-called “Vacuna-gate” (Vaccine-gate), in which close to 500 political elites received vaccinations ahead of schedule.

Per Ipsos Peru, voters only see candidates as slightly better than others on certain issues, with the exception of Urresti, whom one quarter consider the top choice to tackle security. Notwithstanding, voters see Lescano and Forsyth as marginally the best two candidates to control the pandemic, Forsyth and Urresti to fight corruption, and Lescano to reactivate the economy.

In a region beset by declining faith in democracy, Peruvians have some of the lowest levels of enthusiasm for it. According to the Latin American Public Opinion Project’s 2018–2019 AmericasBarometer report, less than half of Peruvians said they support democracy on the whole, 42 percent expressed trust in democratic institutions, and 28 percent reported satisfaction with democracy.

Chase Harrison contributed to this article.