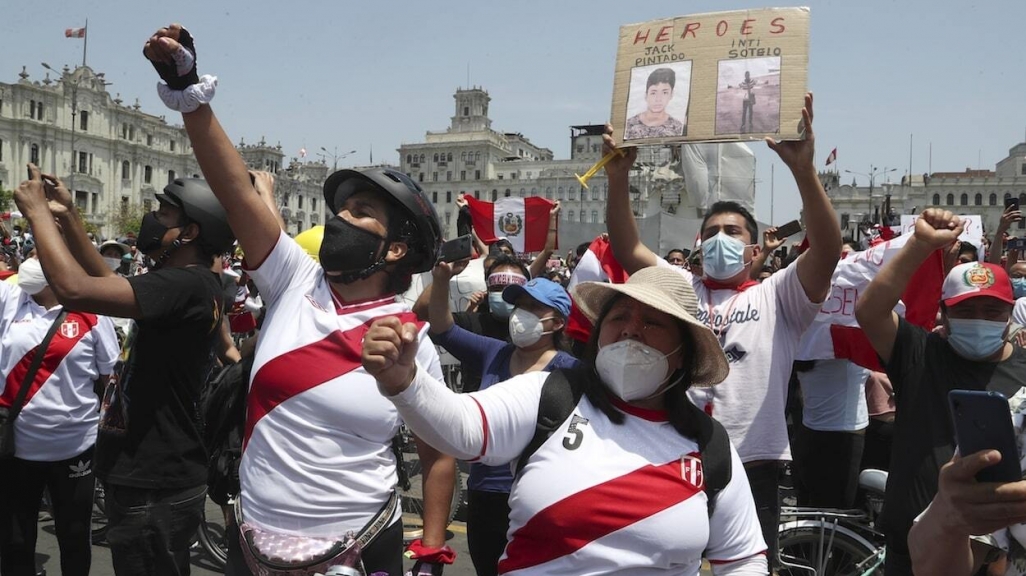 The country's second maneuver to remove the president in 16 months threw the country into political chaos. AS/COA Online covers how Peru arrived at this tumultuous moment on the eve of an election year.

A political tug-of-war between the executive and legislative branches that’s played out for the last couple years came to a head in early November—and as the country faces one of the world’s worst COVID-19 outbreaks. After a tumultuous and violent week, on November 16, Congressman Francisco Sagasti became the interim president.

In this timeline, we chart the events of this week, along with what led up to it and what lies ahead.

March 21, 2018 — First Vice President Vizcarra assumes the presidency after Pedro Pablo Kuczynski resigns from office before Congress can vote on his “moral incapacity.” The phrase, writes Peruvian constitutional expert Alonso Gurmendi, was intended to be used as “a practical fix to a once-in-a-lifetime crisis” after then-President Alberto Fujimori fled the country in 2000, but “since 2016, it has been turned into a precedent, that can be used and abused by Congress with little to no oversight.” The process is not formally impeachment, which relies on a different set of conditions, but nonetheless can end in removing the president from office.

September 30, 2019 — In a constitutional showdown, Vizcarra and Congress invoke dueling articles of the constitution to dissolve and remove the other from office, respectively. In the kerfuffle, Second Vice President Mercedes Aráoz allows herself to be sworn in, but one day later she submits her resignation when it becomes apparent Vizcarra maintains the support of the people and the military, and will retain the presidency.

Ultimately, the courts rule with Vizcarra and uphold his dissolution of Congress.

May 2020 — Speaker of Congress Manuel Marino makes an initial attempt to oust Vizcarra on charges of moral incapacity amid a scandal over paying a singer $50,000 for “motivational workshops” by the Culture Ministry. The move falls apart when Merino is discovered to have tried to convince the Armed Forces to abandon the president.

November 9 — Vizcarra resigns after Congress votes 105-19 to remove him from office for “moral incapacity,” citing allegations of corruption in 2014 when he was a governor, and his handling of the pandemic. Vizcarra, a technocrat with little patience for political theatrics, notes that 68 of 130 members of Congress are facing their own corruption investigations before saying, “I’m going home.”

November 10 — Manuel Merino, an opposition lawmaker, assumes the presidency. Normally, succession would fall to the first and then second vice presidents, but those offices have remained vacant since Vizcarra assumed the presidency and Aráoz resigned. In the days to come, demonstrations swell in Lima and across the country. Merino is not seen in public, nor does he engage in a dialogue with community and protest leaders. His government instead sent police to the streets to control and repress demonstrators.

November 11 — In a statement, the OAS says it’s waiting for Peru’s Constitutional Court to rule on the legality of the vote to remove Vizcarra. Diplomatic missions of countries like Argentina, Spain, the UK, and the United States in Peru issue similar messages during the week, but do not mention Merino by name.

November 12 — One thing Merino’s administration does accomplish in its brief tenure: granting an exclusive 20-year public telecommunications concession to a company created in July.

November 14 — Police kill two protesters, and roughly a hundred other demonstrators are injured, including dozens of members of the press. Peru’s Public Ministry opens a preliminary investigation into the deaths. Additionally, the Constitutional Court issues a writ of habeas corpus to the National Police, demanding they provide information on the whereabouts of 40 missing people. By that evening, 13 of Merino’s 18 ministers tender letters of resignation.

November 15 — Merino submits his resignation in the morning. Congress holds a special session late that evening to vote on a slate of congressmen and women to serve as its directive board, and the country’s governing body, given that the presidency is vacant. But the measure fails to receive the necessary 60 votes. Peru ends the day without a president, vice president, or any other leaders in the line of succession.

November 16 — With a vote of 97-26, Congress approves a second slate of congressmen and women to serve as its board. The Purple Party’s Francisco Sagasti will serve as head of the board and interim president, while Mirtha Vásquez of the Broad Front becomes interim first vice president and prime minister. Vizcarra congratulates Sagasti for his election as head of Congress, and asks the courts to rule on the vote to remove him from the presidency. Countries that issued statements during the previous week remain mum on Sagasti, as does the OAS.

November 19 — Peru’s Constitutional Court declines to hear the case on whether the vote to remove Vizcarra from office due to “moral incapacity” was valid, arguing that since he had already left office, the question was moot. Vizcarra called the decision to not even hear the case a huge disappointment and disservice to all Peruvians who'd protested. Legal experts say the move is a missed opportunity to define the limits of congressional powers.

April 11, 2021 — Peru is slated to hold general elections for president, vice president, and all 130 members of Congress.

July 9 — The presidential runoff takes place, if no one candidate receives over 50 percent of the vote in the general elections.