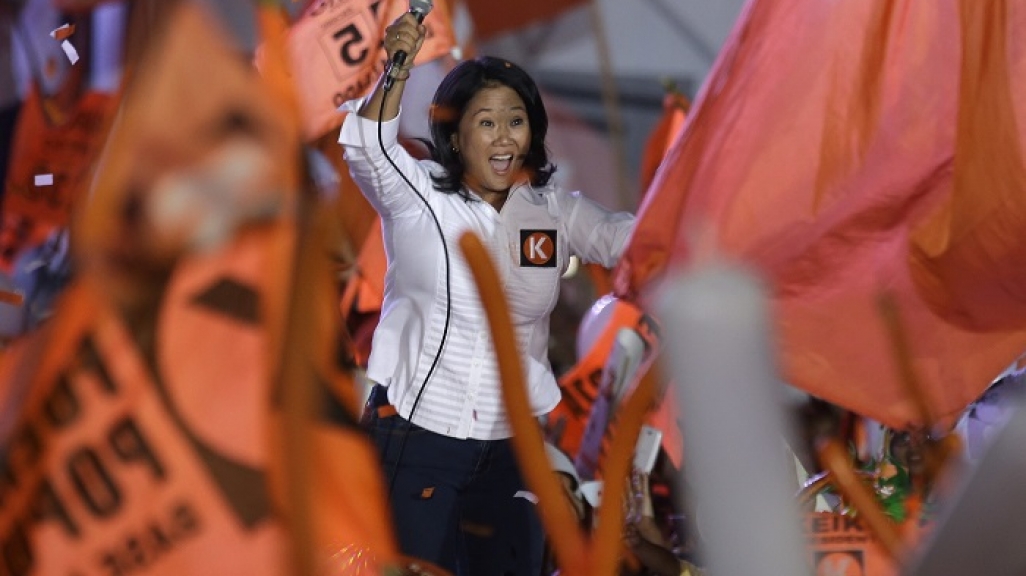 The ex-president’s daughter will face the former World Bank economist for a second-round vote on June 5.

Updated April 12 — Ahead of Peru’s April 10 election, it was fairly clear Keiko Fujimori would take the number one spot, but far less certain was whom she’d face in a runoff: economist and former Prime Minister Pedro Pablo Kuczynski or congresswoman and political newcomer Verónika Mendoza. With all the votes counted, Kuczynski took second place, earning 21.1 percent of the vote and a spot in the June 5 runoff against Fujimori. Known colloquially as PPK, he fended off Mendoza, who ended up in third with 18.7 percent of votes.

Additionally, Fujimori's party, Popular Force, appears poised to pick up 68 of 130 seats in Peru's Congress, which would mark the first majority any one party has held in the unicameral legislature since 2000.

A toss-up in the second round

While Fujimori won Sunday’s vote with 39.9 percent, pollsters indicate the runoff between her and Kuczynski will be much closer. An April 1 head-to-head poll showed Kuczynski with a two-point lead over Fujimori in a runoff—43 percent versus 41 percent. That’s a seven-point improvement from a February head-to-head that showed him five points behind her. Both polls had a 2.3-percent margin of error.

Back in February, PPK’s spot in a runoff was far from assured. At the time he polled at roughly 9 percent as newcomer Julio Guzmán surged to second place in polls. But after Peru’s National Elections Board, known as the JNE, disqualified Guzmán over misfiled paperwork and removed him from the race, Kuczynski saw his support rebound in April to 16 percent heading into the first-round vote. The board also heard complaints against both Fujimori and Kuczynski on charges of vote buying and improper giving out of gifts, but cleared both of wrongdoing.

Kuczynski, 77, is a former World Bank economist and investment banker, and nicknamed “el gringo” for his extensive time spent living in the United States. If elected president, he’d be Latin America’s second-oldest head of state, after Cuba’s Raúl Castro, 84. A recent poll also gave Kuczynski the lowest unfavorable ratings of any major candidate in the April survey, with 37 percent of people saying they would never vote for him, while 45 percent say the same of Fujimori. Kuczynski's supporters said the primary reasons they planned to vote for him were that he would be the best to improve the economy and that he has experience, while Fujimori's said they would choose her because she was a woman and that she would be the best at fighting rising crime in the country.

The sins of the father

Hamstringing Fujimori’s support is her relationship with her father. Fujimori is the eldest daughter of ex-President Alberto Fujimori, Peru’s president during the 1990s who is now incarcerated on charges of human rights violations and abuse of power. Keiko served as first lady during his presidency after her parents divorced while her father was in office, and in the eyes of many, would be a continuation of his policies.

Though she’s made some distinctions and careful critiques of her father’s presidency and party in recent months and signed a pledge at an April 3 debate to not continue the authoritarian style rule of her father, protests against her candidacy have grown over the course of the race. On April 5, some 30,000 protested in Lima on the 24-year anniversary of her father’s takeover of Congress.

But Fujimori, 40, has the benefit of history on her side: she was the runner-up in the 2011 election to Ollanta Humala, and Peru’s last three elected presidents were all runners-up in the previous presidential contests. The third-place candidate she beat to make it into that runoff? Pedro Pablo Kuczynski.