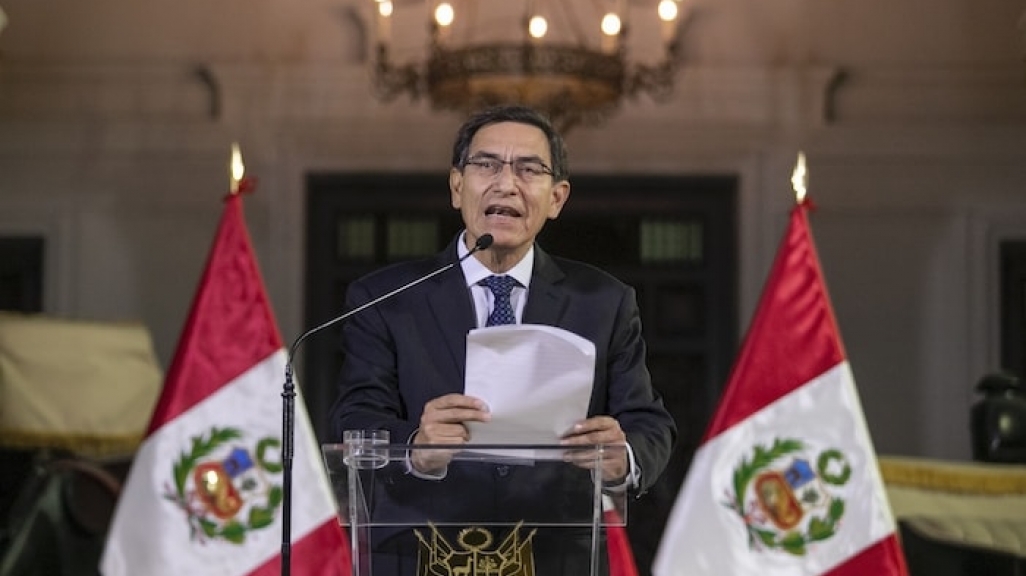 A constitutional crisis—months in the making—has the country on edge.

In the Wild West that is Peruvian politics, the president and Congress had a shootout on September 30 in which they both drew at the same time. President Martín Vizcarra fired with Article 134 of the Constitution, Congress with Article 114. In an actual shootout, physics and physiology would determine the victor. In Peru, it’ll be up to the courts and the laws of thermodynamic politics.

On Monday evening, after months of impasse with the opposition-controlled Congress, Vizcarra announced he was dissolving Congress. Hours later, the unicameral body suspended him from the presidency for one year and swore in Executive Vice President Mercedes Aráoz to serve as acting president. For 24 hours, Peru did not necessarily have two presidents, though it was unclear who was president, Vizcarra or Aráoz. Importantly, Vizcarra had public opinion and the security forces on his side, which cited their own articles of the Constitution in their support for him.

In a statement on Tuesday afternoon, the Organization of American States (OAS) said that Peru’s Constitutional Court must decide the matter and also called for constitutionally directed elections as a “constructive step.” The OAS statement added: “It is fair that the political polarization in the country will be resolved by the people at the polls.”

Aráoz, a holdover from the previous administration, took some heat for allowing herself to be sworn in when the president she served had not resigned and for acceding to the opposition’s charge that Vizcarra had not upheld the Constitution. Late on Tuesday night, she resigned the vice presidency and therein the acting presidency. Though her letter refers to Vizcarra’s suspension from office, she also cited the OAS call for the Constitutional Court to decide the matter and voiced support for general elections to be held as soon as possible.

At the moment, that leaves Vizcarra alone in the presidency, as the next in line declined to succeed Aráoz. That said, there remains much debate—and denial—over whether Congress is dissolved or in session.

What led up to this?

Since the beginning of July 2016, Congress has been at odds with two succeeding presidents. Pedro Pablo Kuczynski, known as PPK, beat Keiko Fujimori by a razor-thin margin in a runoff to win the presidency in June of that year. But Fujimori’s party, Popular Force, won a congressional majority in Congress and focused most of its efforts in frustrating PPK’s legislative agenda and removing his cabinet ministers. That said, PPK did himself no favors when he failed to come forward about his involvement in an Odebrecht-related scandal and, in a poorly calculated move to placate Popular Force legislators and stave off impeachment, pardoned Alberto Fujimori, Keiko’s father and an autocrat imprisoned for crimes against humanity.

The Peruvian Constitution gives the president one important lever of power over the legislature: the confidence vote, in which members of Congress must vote on whether or not to support the president’s cabinet. The president can call for a vote of confidence anytime during the first four years of a five-year term. If the president loses a first vote, the entire cabinet must resign. If the Congress votes down the executive a second time, however, the president has the right to dissolve Congress, per article 134. In this case, new general elections must take place within four months of the dissolution. PPK lost a confidence vote in September 2017, and his cabinet was forced to resign. He then resigned in March 2018 on the eve of his removal by Congress, and Vizcarra, his vice president, stepped in to serve out the term through July 2021.

Vizcarra asked for a confidence vote in September 2018 to back a reform he’d proposed to bring back the Peruvian Senate (the one Alberto Fujimori dissolved), and Congress approved the vote. As has become a pattern, however, Popular Force significantly so altered the proposed reform that it would have weakened the president’s confidence vote powers and did not resemble the bill Vizcarra had originally proposed. Vizcarra ultimately had to campaign against the Senate proposal, and it was the only one of the four measures Peruvian voters did not approve in a referendum on the package in December 2018.

Vizcarra continued to propose reforms, which Popular Force continued to stall. In his July state of the union address, Vizcarra first announced that he would propose early presidential and legislative elections as a way out of the impasse. Congress shelved that proposal on September 26, and the following day Vizcarra called for a confidence vote. The confidence votes are supposed to have special urgency, but the fujimorista Congress did not take it up and instead continued with a session to install judges on a key tribunal. Vizcarra considered their refusal to take up the confidence vote a denial in and of itself, and, on the evening of September 30, he invoked Article 134 and said he was dissolving Congress. He also set a date of January 26, 2020, for early general elections.

Two hours later, Congress declared Vizcarra “temporarily incapacitated” and suspended him. They didn’t have the votes to fully remove him from office either through impeachment (Article 117) or “vacating” the office (Article 113), however, so they suspended him for one year and swore in Aráoz as acting president in accordance with Article 114.

How is—or isn’t—Vizcarra’s dissolution of Congress similar to Alberto Fujimori’s?

Though the image of a Peruvian president announcing the dissolution of Congress on live television does have a historical precedent, there are differences between Vizcarra and Fujimori’s moves. Fujimori made his April 5, 1992, announcement on television as the armed forces were moving in to the congressional, judicial, and media buildings. Detractors were arrested. Fujimori made a move to change the Constitution and installed himself for another eight years.

Vizcarra, for his part, has made no use of military force, except to tweet that he had the support of the armed forces. There have been no arrests or attempts to take over any media outlets. He has also reiterated on several occasions he wants to step down early and has no interest in prolonging his time in office.

One of the main points the Constitutional Court will need to rule on is if the two confidence votes denied rule means two votes within one term or two votes under one president. Under the former scenario, the September 2017 confidence vote PPK lost would be the first and this September 2019 vote Vizcarra says Congress denied him the second. If, however, the court rules that the two confidence votes must be under the same president, then Vizcarra would need the Congress to reject his cabinet one more time before he’s able to invoke Article 134. And this second denied vote must occur before July 28, 2020, when the last year of Vizcarra’s term begins. Additionally, Vizcarra has argued that the maneuvering by Popular Force to give Vizcarra’s Senate proposal a confidence vote but then not see the legislation through is in effect a denial of the confidence vote and part of the basis for his dissolving the body.

Legal opinion on the matter is split.

Even if the court rules against Vizcarra’s invocation of Article 134, Congress’ argument isn’t a clear-cut constitutional case either. Article 114 refers to a “temporary incapacitation” of the president, and is generally understood to refer to the president being physically unable to perform his or her duties, akin to Article 25 of the U.S. Constitution. But in its motion to suspend the president, Congress accuses him of usurping the legislature’s powers, breaking the constitutional separation of powers, and surrounding himself with unidentified foreign advisors. The declaration even cites rising childhood malnutrition and anemia rates, along with stagnant economic growth, as evidence of Vizcarra’s failure to fulfill his presidential duties.

While the question of the presidency seems to be resolved for the moment, things remain very much unsettled in Peru. A battle is breaking out between the Constitutional Court and members of Congress, who deny they’ve been dissolved and are trying to appoint members to the court. The Constitutional Court also has on its docket the question of if Keiko Fujimori should be released from preventive prison, where she’s awaiting trial for charges of money laundering and running a criminal organization within Popular Force.

Vizcarra, meanwhile, plans to swear in a new cabinet on October 3.

End of an Era in Cuba? For Exiles in Miami, Raúl Castro’s Exit Is Just 'More of the Same'

“It remains to be seen how much flexibility Díaz-Canel will have,” said AS/COA's Eric Farnsworth to Miami Herald.