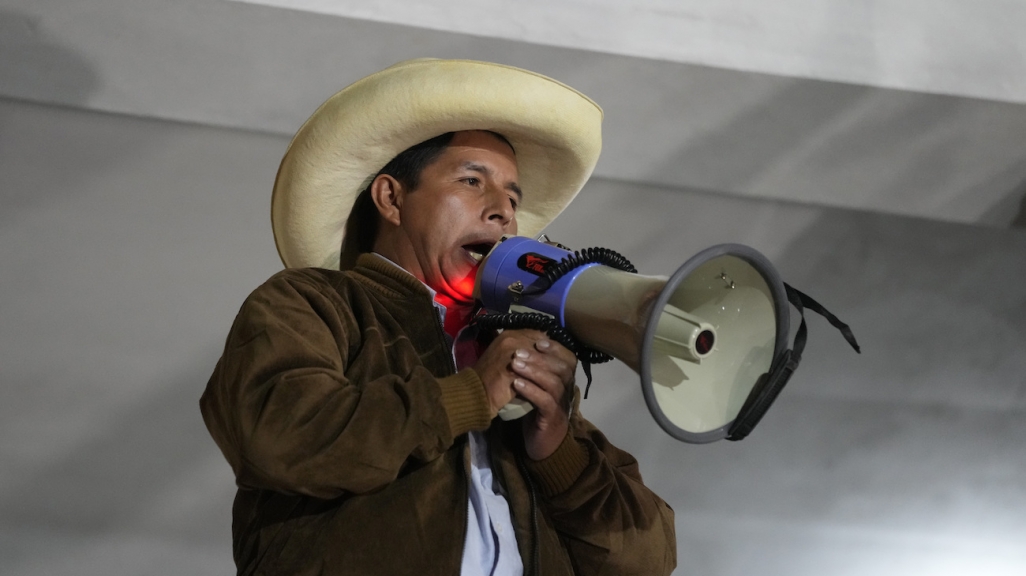 The lesser of two evils Looking ahead

With nearly all votes counted, the first-time presidential candidate is ahead of rival Keiko Fujimori by less than half a percentage point.

Updated, June 14 — Pedro Castillo, a teacher and union activist from the Free Peru party, is close to victory in Peru’s June 6 presidential runoff against former first lady and Congresswoman Keiko Fujimori from the Popular Force party. With 99.561% of the vote counted, Castillo sits in first place at 50.2 percent, some 60,000 votes ahead of Fujimori out of 18.8 million cast. Fujimori, however, has yet to concede as her campaign and party are claiming fraud. Additionally, election officials are reviewing claims of irregularities from both parties, a process they say could take until early July at the latest to wrap up.

Fujimori, the daughter of jailed ex-President Alberto Fujimori, alleged fraud at a press conference on June 7, saying Castillo’s campaign engaged in a “strategy” to “distort or delay the result,” but so far she has presented no major evidence of election fraud or tampering. That same Monday evening, the Organization of American States released a statement congratulating Peru on holding a peaceful and democratic election day with no observed significant electoral issues. The following day, the head of one of Peru’s leading transparency organizations said their observers found no evidence of electoral fraud, and on Wednesday, a mining magnate and former head of Peru’s private business association distanced himself from Fujimori and said that while he might have asked for some reviews, her claims of fraud were “excessive.”

As close as the national vote is, there are deep divisions between voters along geographic lines, with Castillo winning several interior and southern departments by gaping double-digit margins. Castillo hails from Cajamarca in northern Peru, and if results hold, he will be just the second elected president to hail from outside Lima since the 1950s. The results are a bitter pill for Fujimori, who aside from losing the two previous presidential runoffs by 0.2 and 2.9 percent, is now likely to face trial in an ongoing anticorruption case, with the hope of presidential immunity all but out of reach. On June 10, prosecutors recommended she be sent back to pretrial detention, after having been released in May 2020 for health considerations at the onset of the pandemic.

Just over 6.5 percent of voters cast blank or null votes on Sunday—exactly the same amount as five years ago—an option typically used as a protest as voting is mandatory in Peru. The next president is to be inaugurated to a five-year term on Peru’s bicentennial Independence Day, July 28.

The lesser of two evils

The race between two such polar opposite candidates—neither of whom had been expected to make the runoff in the first place—in a year when many Peruvians already felt battered by the political upheaval of the past five years plus the COVID-19 pandemic left many voters facing an almost existential choice between the lesser of two evils in what was supposed to be a celebratory bicentennial election.

A favorite among rural and antiestablishment voters, Castillo presented himself as a vote against the Lima-centered political and business establishment with a promise to alter the country’s current course of action through broad economic and constitutional reforms. With markets already jittery about the possibility of a Castillo win, the Peruvian sol dropped 2.5 percent against the U.S. dollar on June 7—its biggest single-day decrease in a decade.

Fujimori, on the other hand, focused on a pro-status quo and security-centered platform. She also worked to cast her rival as a Hugo Chávez-style communist, a message that gained traction in Peru, which has received 1.2 million Venezuelan refugees in recent years, more than any other country besides Colombia. With a penchant toward the authoritarian style of her father, she ran on creating a demodura, or a “hard democracy,” modeled on a strong security state and “restoring respect” for law enforcement. Though she was able to improve her anti-vote numbers during the course of the campaign, the anti-fujimorismo movement remained vocal and highly visible.

Castillo’s campaign at times felt spontaneous and chaotic, leaving questions on how he will govern. Throughout the campaign, most of his advisors were kept out of the spotlight except for Free Peru’s founder Vladimir Cerrón, who is seen as more radical than Castillo and said in April that Peru’s left should “learn to stay in power as has happened in Venezuela.” The party support an overt Marxist-Leninist platform that fundamentally aims to spread the wealth of Peru’s natural resources with all citizens. Castillo has also been linked to Movadef, the political movement of the Shining Path, the Maoist guerrillas who terrorized Peru in the 1980s and 1990s. Though fragments of the group still exist today, Castillo himself denies any association. Like Fujimori, Castillo is also a social conservative, opposed to legalizing gay marriage, abortion, and gender equity in education.

Policy-wise, Castillo shared he would like to nationalize segments of key economic sectors like mining and energy, restructure the pension system, and allocate 10 percent of the country’s GDP to the education and health systems. Peru’s entire government budget is currently 14 percent of GDP. Another central part of Castillo’s platform is a constitutional rewrite via a constitutional assembly. That said, the project will require congressional approval to move forward with a referendum needed on just the question of whether to convene an assembly.

In general, without a majority in congress, Castillo faces an uphill battle to carry out his agenda. Of the 130 seats in the legislature, Castillo’s Free Peru party holds 37, the largest party bloc elected, while Popular Force will have 24. Official coalitions in congress are still forming, with both parties picking up support from the 10 parties in the incoming session, with a few parties remaining unallied.

The outgoing legislature, whose members were barred from reelection, is taking steps to give the body more permanency. On the agenda for the June 9–11 meetings are the questions of restoring a bicameral congressional system, as well as the so-called “question of confidence," a constitutional mechanism that in theory gives the executive and legislative branches checks on each other, but was used to detrimental and dysfunctional effect during the previous term, with the president once dissolving the legislature and the Congress twice forcing the president to renew his cabinet. Under the current proposal, the president would only be able to dissolve a new lower chamber, protecting the members of the upper chamber from expulsion. All the while, the legislature would still retain the ability to unseat the president through claims of the president’s moral incapacity—the same process that left Peru in a presidential crisis in November 2020 that saw it cycle through three presidents in one week.

Meanwhile, Fujimori and her codefendants—who include her husband—will likely have their day in court, with a 30-year sentence for her on the line.