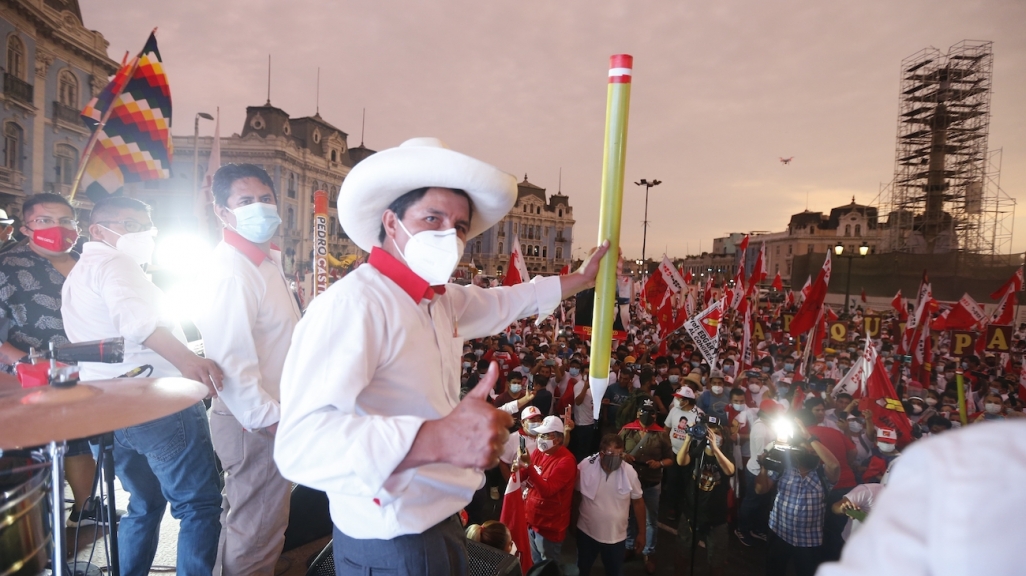 Pedro Castillo at a rally. (AP)

Hurdles on the ground Candidate profiles A more fractured Congress

Opposite Corners: Castillo and Fujimori to Spar in Peru’s Second Round

The electorate’s apathy is giving way to antipathy as two of the most polarizing candidates move on to the June 6 runoff.

There were 18 official candidates in Peru’s April 11 presidential general election, meaning 306 possible runoff scenarios. The polls were so close—and within margins of error—that many were cautious to not make predictions.

But even with that level of circumspection, the result still caught many off guard. Leftist political novice Pedro Castillo will face right-wing political heiress Keiko Fujimori in the June 6 presidential runoff. The two polled at seventh and fifth, respectively, in Ipsos Peru’s final pre-vote survey at the end of March. Peru’s rules against publishing official polls in the week before the vote, also meant that late movements in the polls went undetected—especially Castillo’s rise.

With 99.4 percent of votes counted, Castillo of the Free Peru party won the first round with 19.1 percent of votes, while Fujimori of the Popular Force party took second with 13.4 percent. Additionally, Castillo was the top vote-getter in 17 of Peru’s 24 departments, while Fujimori was in just three. Ultraconservative businessman Rafael López Aliaga edged out economist Hernando de Soto for third, 11.7 percent to 11 percent. All other candidates finished below 10 percent and the combined share of those who cast blank or null votes was 17.7 percent, about half a point lower than in the last general elections five years ago.

Hurdles on the ground

The pandemic was voters’ top concern heading to the polls and with reason: Peru hit its single highest daily new cases load on April 1 and single highest death toll on April 7. With the looming danger of infection combined with low enthusiasm overall for the candidate field, participation in the presidential race was 71.4 percent nationwide, down from 81.9 percent in the presidential first round in 2016.

Voting is mandatory for adults ages 18 to 70 in Peru, and voters faced fines ranging from $6 to $24 for abstaining and of $60 for not showing up for poll worker duty. There were some accommodations due to the pandemic: those in at-risk groups for the virus—including adults over 65 and those with qualifying underlying health conditions—were not required to vote, and those who showed up to a polling site with a high temperature were turned away from both voting and serving as poll workers.

The differences between Castillo and Fujimori are in most cases stark: he is a leftist elementary school teacher and union leader from Peru’s north, while she is a former first lady and congresswoman from Lima with a bent toward authoritarianism. A runoff featuring two such opposite figures is proving to be jarring to an already beleaguered and jaded Peruvian electorate. It also threatens to polarize what was a largely unenthusiastic race prior to Sunday in a country still looking to recover from the divisions stoked by the political turmoil of the past five years.

Castillo, 51, is by most measures an outsider. Hailing from Peru’s northern Cajamarca region and often campaigning on horseback, he has never held elected office. Though he made a failed mayoral candidacy in 2002, this was his first run for the presidency. He supports rewriting the constitution and vows to dissolve Congress if it impedes the process. He also pledges to restructure the pension system, designate 10 percent of GDP to both education and healthcare, and nationalize key energy and mining industries. He gained national prominence as the head of a teachers union, known as Conare, during a 2017 strike. Conare has ties to Movadef, which is the political movement of the Maoist Shining Path guerrilla group that terrorized Peru in the 1980s and 1990s, remnants of which remain active today. Castillo denies having ties to the group. His party’s platform describes itself as a “socialist left” party and says that, “In order to be from the left, it is necessary to embrace Marxist theory.” In 2016, the party, then called Libertarian Peru, fielded a presidential candidate who ended up withdrawing before election day. Castillo draws support from voters inclined toward antiestablishment politics, and his supporters were most likely to say “he understands people like us” than were those of any other major candidate.

Fujimori, on the other hand, is about as insider as it gets. She became first lady of Peru at age 19 during her father Alberto Fujimori’s presidency after her mother divorced him over charges of abuse and torture. She later served as a congresswoman in the 2006–2011 session and was the runner-up in both the 2011 and 2016 presidential races. After narrowly losing the 2016 runoff, Fujimori continued to operate through Popular Force, which won 70 of 130 seats in those elections. In the last three years, she’s been arrested and put in pretrial detention twice on charges that include money laundering and operating a criminal organization within her party. While she is currently out of jail, her trial is ongoing, and on March 11, a prosecutor sought a 30-year sentence for her on the money laundering charges.

In an interview in February, she said she’d offer a demodura—a play on democracy and the heavy-handed/hardline (mano dura) ruling style her father was known for. Fujimori won less than a third of the first-round votes (1.8 million) than she did five years ago (6.1 million). Though, she could pick up support from voters who, as much as they reject the authoritarianism of fujimorismo, see her as a known entity compared to Castillo.

For all their similarities, both gain most of their popularity in rural areas and both are socially conservative. Both candidates oppose LGBTQ and women’s rights and have pledged to pull Peru out of human rights treaties.

Based on early projections, 11 parties will have representation in the incoming legislative session, up from nine in the current one. Three of the current nine parties lost their seats entirely, including the messianic party FREPAP, which lost 15 seats. Six parties will be returning, most of which will have diminished presences, with the exception of Fujimori’s Popular Force, which increased its seats from 15 to 24. The five new parties include Castillo’s Free Peru (32 seats), López Aliaga’s Popular Renovation (13), and de Soto’s Advance Country (7). The ideological balance of the incoming Congress on paper appears to tip toward the right, albeit parties’ platforms and positions can be fluid.