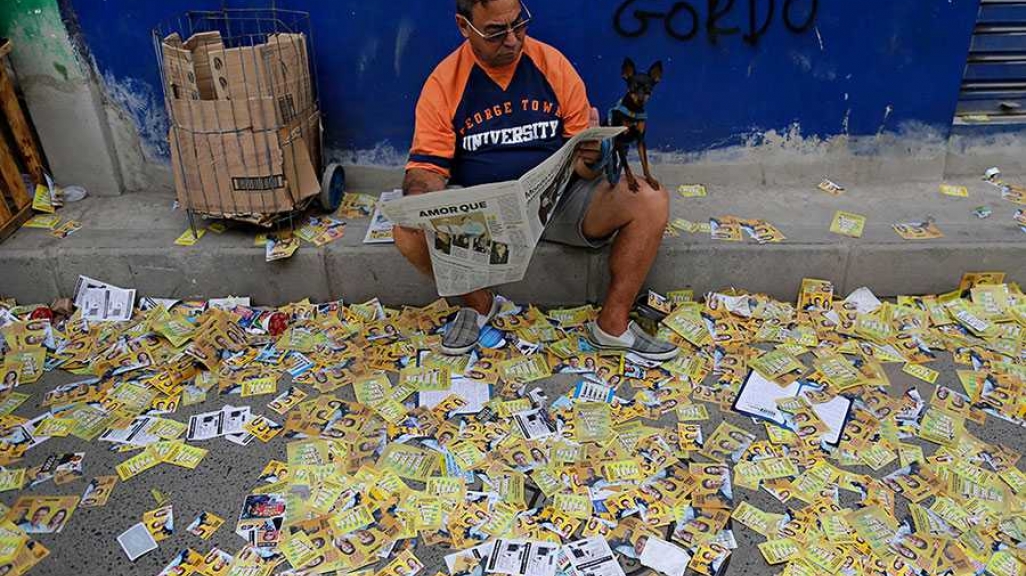 A Brazilian reads on a sidewalk littered with campaign propoganda. (AP)

Brazil's Gubernatorial and Legislative Races—and What Worries Voters Most

By Elizabeth Gonzalez and Brian Harper

On October 7, Brazilians will elect 27 governors and 567 members of Congress. We look at those competitions and top voter issues.

Updated October 1, 2018 — On October 7, Latin America’s biggest country will go to the polls for general elections. Brazil mandates that citizens over 18 cast ballots for president, vice president, governors, and 567 congressional seats. Until recently, 147 million Brazilians were eligible to vote, but a Supreme Court decision on September 26 barred 3.4 million people for not registering their fingerprints with the biometric voting system. With 45 percent of them based in the northeast, a region that is typically a bastion for the Workers’ Party (PT), the decision could depress turnout for PT presidential candidate Fernando Haddad.

But while all eyes are on the presidential election, we focus on the overlooked state and legislative seats at stake, as well as the issues driving voters to the polls.

Check out our Brazil Election Guide, as well as a breakdown of the presidential candidates and how they're faring in the polls.

Getting to the gubernatorial races

In October 7 first round, Brazil will also vote to elect 27 governors for all of its 26 states and the federal district in Brasilia. Like the race for the presidency, gubernatorial elections will go to a runoff if no candidate wins more than 50 percent of the vote. According to Ibope polls, most states will see a second-round vote, though the overall balance of the distribution between the parties’ governorships should remain roughly the same.

The PT is likely to maintain the same number—five—governorships it currently holds, with the possibility to win one more three-way toss-up in Santa Catarina, where the PT candidate is in a statistical tie for second place. The party is expected to keep at least two incumbent gubernatorial seats right off the bat: Bahia and Ceará. And its candidates could retain both Acre and Piauí after runoffs, while also winning a new seat in Rio Grande do Norte. The PT incumbent in Minas Gerais, however, is set to lose to the Brazilian Social Democratic Party (PSDB) candidate in a runoff in the country’s second-most populous state.

The PSDB and the ruling Brazilian Democratic Movement (MDB)—Brazil’s two other main parties after the PT—will lose some ground in the governors’ races, but one of the two is expected to win the country’s most populous state. Both are in a competitive race for São Paulo, which is home to 22 percent of Brazil’s registered voters. The MDB’s Paulo Skaf and PSDB’s João Doria are in a statistical dead heat, per Ibope’s September 25 poll, though Skaf has been making gains.

The MDB currently holds eight governorships but is on track to end up with no more than five, even with São Paulo. The party formerly known as the PMDB is positioned in the polls to win Pará and keep its seat in Alagoas in the first round, with potential runoff wins for its incumbents in Rio Grande do Sul and Santa Catarina. The MDB, however, is projected to lose its current governor seats in Espírito Santo, Rio de Janeiro, Sergipe, and Tocantins. The PSDB, for its part, could go from four governorships to just three. It’s set to keep only one incumbent governor in Mato Grosso do Sul after a runoff and is projected to also win the runoffs in Minas Gerais and Rondônia. It also has a slight chance to take Sergipe’s three-way toss-up.

On the other hand, two candidates from smaller parties—the Democrats and We Can (PODE)—are running in the gubernatorial race in the state of Rio de Janeiro. PODE’s soccer-star-turned-politician Romário de Souza Faria was competing for second place in polls with the Progressive Republic Party’s Anthony Garotinho, but a court ruling on September 27 convicted Garotinho of corruption, barring him from running. Either way, with nearly a quarter of the electorate undecided, the race between Romário and the Democrats’ Eduardo Paes, a former Rio mayor, will likely be decided in the second round on October 28.

On the other hand, three candidates from smaller parties—the Democrats, We Can (PODE), and the Progressive Republic Party (PRP)—are running in the gubernatorial race in the state of Rio de Janeiro. All three parties’ candidates have been linked to corruption scandals. With nearly a quarter of the electorate still undecided, the race will likely be decided in the second round on October 28.

When it comes to presidential frontrunner Jair Bolsonaro’s party, the Social Liberal Party (PSL) is only competitive in one gubernatorial race: Roraima, where the PSL candidate is a distant second in the polls behind the PSDB candidate. The party has held no governorships to date.

More of the same in Congress?

With 35 parties registered and 567 seats to fill, Brazilian voters will elect two senators per state for a total of 54 senators (or two-thirds of the Senate) to eight-year terms and elect legislators to all 513 seats in the Chamber of Deputies to four-year terms.

While the number of conservatives entering Congress was an under-covered story in 2014, this year’s legislative election story involves the large number of incumbents under investigation for corruption who are in the running—and likely to win. “The unbelievable thing about this election is that even after the Car Wash scandal, even after the massive rejection of the entire political class, you have more incumbents in Congress up for reelection than in any recent election cycle,” said AS/COA Vice President of Policy Brian Winter in a Latin America in Focus podcast episode last week.

As of last fall, 40 percent of congresspeople faced corruptions probes before the Supreme Court. But 457 members of Congress are running for reelection—the greatest number of incumbents since the end of the military dictatorship in 1985. At least two factors are at play here. It’s all or nothing for senators and deputies facing corruption charges, since their government seat gives them protection from prosecution. At the same time, new electoral reforms came into effect this year, shortening the campaign period from 90 days to 45 days, making it harder for newer faces to get their message out.

Nonetheless, a new generation of politically minded groups is trying to diversify and elevate younger voices in Congress. While a white male in his 50s with at least $250,000 in assets is the typical congressman, a growing number of women, black Brazilians, and younger politicians from across the political spectrum are on the rise through movements like Agora, Partido Novo, and RenovaBR.

Health surpassed corruption as the country’s biggest problem in the eyes of Brazilians in December 2016 and has held the top spot ever since. In a September 2018 Datafolha poll, 23 percent of respondents listed health as their first concern—five points higher than in June—with 40 percent saying it should be the next president’s first priority, followed by education (20 percent) and violence (15 percent). While Sistema Único de Saúde (SUS), Brazil’s public health care system, promises free universal health care to all citizens, it faces serious funding challenges. In 2017, the government undershot the Constitution’s guaranteed minimum health budget for the first time in almost 30 years.

Violence is also a major cause for concern, with 20 percent of Datafolha’s survey respondents—the highest number since April 2014—calling it the country’s greatest problem. This poll was taken after Bolsonaro’s near-fatal stabbing at a campaign event on September 6. Some 30 percent of his supporters, who have embraced the candidate’s law-and-order rhetoric, cite violence as the issue they’re worried most about, followed by health and corruption. Men, who represent 48 percent of voters, are also more preoccupied with violence than women, as are the 15 percent of voters aged 60 or more, with 23 percent naming violence as their chief concern. This is compared to 16 percent of 16- to 24-year-olds and 25- to 34-year-olds, who make up 22 and 23 percent of voters, respectively.

Voters’ fear of violence is supported by evidence. According to the Institute of Applied Economic Research (Ipea) and the Brazilian Forum of Public Security’s 2018 Atlas of Violence, over the course of the prior decade, the country lost more than half a million people to homicide, with more than 70 percent due to firearms. The victims include Rio de Janeiro City Councilwoman Marielle Franco, whose March 2018 assassination alongside her driver sparked international outrage.

Though the number of Brazilians who see corruption as the country’s leading problem fell from 37 percent in March 2016 to 14 percent in September 2018, it still ranks as a primary worry. This is thanks in part to the ongoing impact of the sprawling Car Wash (Lava Jato) corruption scandal. In its wake, Brazil’s last president, Dilma Rousseff, was impeached for budget manipulation in 2016. Her predecessor, Lula, who led polls in the 2018 race, began a 12-year prison sentence for corruption in April. He withdrew his candidacy on September 11, after the country’s electoral court invalidated his registration.