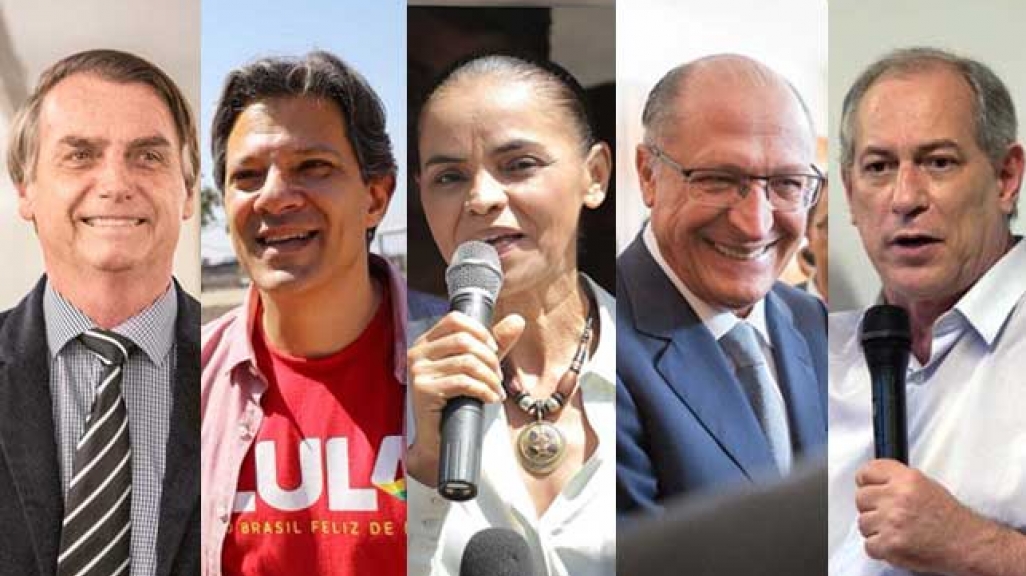 Explainer: A Who's Who in Brazil's 2018 Presidential Election Race

Ahead of the October 7 first round, meet the contenders in Brazil’s unpredictable race.

Updated September 11, 2018—Former President Luiz Inácio Lula da Silva’s withdrawal from Brazil’s presidential race and Congressman Jair Bolsonaro’s near-fatal stabbing have added drama to an already tempestuous campaign. Lula's exit, however, clarifies who will be on the ballot for the October 7 general election and, in the event that no one gets more than 50 percent of the vote, the October 28 runoff.

This is Brazil’s first election since President Dilma Rousseff’s 2016 impeachment. At the heart of the race has been the question of whether Lula, her predecessor, could run. The preferred choice of the Workers’ Party (PT), Lula generally led polls, despite beginning a 12-year prison sentence for corruption in April. The country’s Clean Record Law bans candidates from running if an appeals court upholds a conviction against them. Lula’s was upheld in January, and Brazil's top electoral court overturned the former president's registration as a candidate on September 1, a decision Lula's legal team initially said it would appeal. On September 11, Lula bowed out of the race, with his running mate, former São Paulo Mayor Fernando Haddad, replacing him and leaving the election's outcome far less sure.

AS/COA Online takes a look at the candidates.

How are the candidates polling? Check our poll tracker and learn more in our Brazil guide.

Fernando Haddad — Workers' Party (PT): Haddad served as mayor of São Paulo (2013–2017) and, before that, as education minister for Lula and Rousseff. His achievements while leading Brazil’s largest city include infrastructure improvements and drug reduction initiatives. As Lula's running mate, Haddad campaigned on an “unwavering defense of Lula, the biggest political leader of Brazil.”

Haddad is not wrong about Lula’s influence. Lula rose from humble origins to prominence as a trade union leader, eventually winning his fourth presidential campaign in 2002 and serving from 2003 until 2011. During his tenure, millions of Brazilians rose out of poverty, and he left office with an 87 percent approval rating. But by 2012, Brazil’s economy was quickly slowing, and in 2016, Lula was accused of accepting bribes in the far-reaching Lava Jato corruption scandal.

His supporters have been steadfast, defending Lula against what they see as a politically motivated conviction. Now that he is out of the race, Haddad’s goal will be to capture the hearts of Lula’s impassioned backers. Polls without Lula in the race show Haddad’s status rising, though he still trails several candidates. Like Lula, Haddad has been charged with corruption. While prosecutors’ accusations are unlikely to keep Haddad’s name off the ballot, it could dampen his performance.

Lula’s agenda is a good sign of what Haddad’s will be, with proposals to reverse privatizations and a labor reform passed under President Michel Temer; institute an emergency program to address the country’s economic woes and achieve full employment; and reform the tax, banking, education, and judicial systems.

Jair Bolsonaro — Social Liberal Party (PSL): Referred to as “Brazil’s Trump,” Bolsonaro is a former army captain and, since 1991, member of the Chamber of Deputies. After 26 years in Congress, only two of the 171 bills he submitted became law. Bolsonaro is famous for controversial remarks: he once told a fellow legislator, “I won’t rape you because you don’t deserve it,” and dedicated his vote to impeach Rousseff, a survivor of political torture, to a military leader who oversaw a torture unit. He rails against corruption and has proposed weakening gun regulations, giving police officers free rein to kill someone who shoots at them, and lowering the age of criminal responsibility to 14.

His decision to name the University of Chicago-educated Paulo Guedes as his chief economic adviser has placated some investors, and Bolsonaro recently expressed openness to privatizing state companies, shifting to more trade with the United States and less with China, and reforming Brazil’s pension system. But, in the past, Bolsonaro has opposed free market measures.

He has openly pined for a return to military rule and is not alone. Last year, a poll found approximately 43 percent of Brazilians voicing support for such an intervention. In addition, now-retired four-star General Antônio Hamilton Martins Mourão ventured that a military takeover might become necessary. Bolsonaro has since named Mourão his running mate.

While campaigning at a street event on September 6, Bolsonaro was stabbed in the abdomen. His son initially described the wound as “superficial,” but the attack nearly killed Bolsonaro. Though his recovery threatens to keep him from campaign events, he has vowed to remain in the race. Polls show rising support for him since the attempt on his life.

Disgust with corruption, a willingness to overlook Bolsonaro’s most offensive comments, the belief that a strongman’s approach is necessary to right Brazil’s ills, and the knife attack could help the candidate's chances.

According to pundits, however, his radicalism and a dearth of campaign money and television advertising are serious weaknesses. A crowded field also makes a runoff likely, and because a high number of Brazilians indicate they will not vote for him under any circumstance, the public might coalesce around the alternative if Bolsonaro advances to the second round.

Marina Silva — Sustainability Network (REDE): A former member of the Senate, Silva was born to a poor rubber tapper family in Brazil’s Amazon region. She went on to earn a degree and join environmentalist Chico Mendes and the rubber tapping community to demonstrate against deforestation. Later, she served as Lula’s environmental minister until 2008, when she resigned in protest over development projects in the Amazon.

This is Silva’s third presidential run. She left the PT in 2009 and launched a bid with the Green Party in 2010. Silva was Eduardo Campos’ running mate with Brazil’s Socialist Party (PSB) in 2014 and finished third when she replaced him at the top of the ticket after he died in a plane crash.

Polls suggest Silva could beat Bolsonaro in a runoff. She benefits from national and international name recognition and hasn't been caught up in corruption scandals. While her refusal to paint a falsely sunny economic picture might have cost her the last election, her foresight has aged well.

On the other hand, Silva has never made it to the second round of a presidential election, and critics say that, aside from environmental issues, little sets her apart. Her assertion that Lula’s corruption conviction should prevent him from running for office could keep his supporters from backing her, while her previous role in Lula’s administration could turn away the former president’s fiercest critics. Because Brazil’s electoral system uses previous election performances to determine the campaign funds a party receives, REDE is at a disadvantage. Finally, Silva has dealt with an array of health issues over the years, raising concerns in the past.

Geraldo Alckmin — Brazilian Social Democratic Party (PSDB): If Bolsonaro is seen as the country’s Trump, Alckmin—an anesthesiologist and former governor of São Paulo—draws comparisons to Hillary Clinton and is seen as an establishment candidate. He also served in the Chamber of Deputies and lost to Lula in the 2006 runoff. Like Lula’s PT and several other traditional Brazilian political parties, Alckmin and the PSDB have been implicated in corruption cases.

Alckmin supports Temer’s pro-market economic policies and secured the backing of a coalition of five centrist parties: the Progressive Party (PP), Democrats (DEM), Solidarity (SD), the Brazilian Republican Party (PRB), and the Party of the Republic (PR). Though polls show him trailing Bolsonaro and Silva, the bloc of parties supporting Alckmin will garner him nearly 40 percent of television advertising time during the presidential race.

Employment and investments in infrastructure, sanitation, and housing are priorities for Alckmin. He also promised to eliminate the public deficit in less than two years, double Brazilians’ income, pursue privatization (with the exceptions of Petrobras and Bank of Brazil), and pass tax and welfare reforms.

Alckmin will struggle if voters are primarily motivated by strong antiestablishment sentiments or a “throw the bums out” attitude. He has been nicknamed “the chuchu popsicle” given what some perceive to be a bland demeanor. This image as a steady, if uninspiring, figure could work in his favor if he reaches the runoff with Bolsonaro—and Brazilians see that particular opponent as a risky bet.

Ciro Gomes — Democratic Labor Party (PDT): This is Gomes’ third attempt at Brazil’s presidency. He previously ran with the Popular Socialist Party (PPS) in 1998 and 2002, in addition to serving as mayor of Fortaleza, governor of Ceará, finance minister under President Itamar Franco, and national integration minister under Lula. Some argue he is the candidate with the most to gain from Lula's legal travails.

If Gomes advances to a runoff, polls suggest he would defeat Bolsonaro or Alckmin, but fall to Silva. The collection of parties that gathered around Alckmin was a blow to Gomes, who was expected to receive their support. Critics in pro-market circles say his proposals involve too much governmental intervention and too little fiscal restraint. Nonetheless, Gomes projects confidence, saying “anyone who doesn’t have a rock where a heart should be” will vote for him.

Eight other candidates have thrown their hats into the ring. Though none is expected to win, their collective ability to draw votes away from other candidates could make or break leading contenders’ fortunes.

Image: All photos come from candidates' Facebook profiles with the exception of that of Jair Bolsonaro, whose photo was acquired from AP.