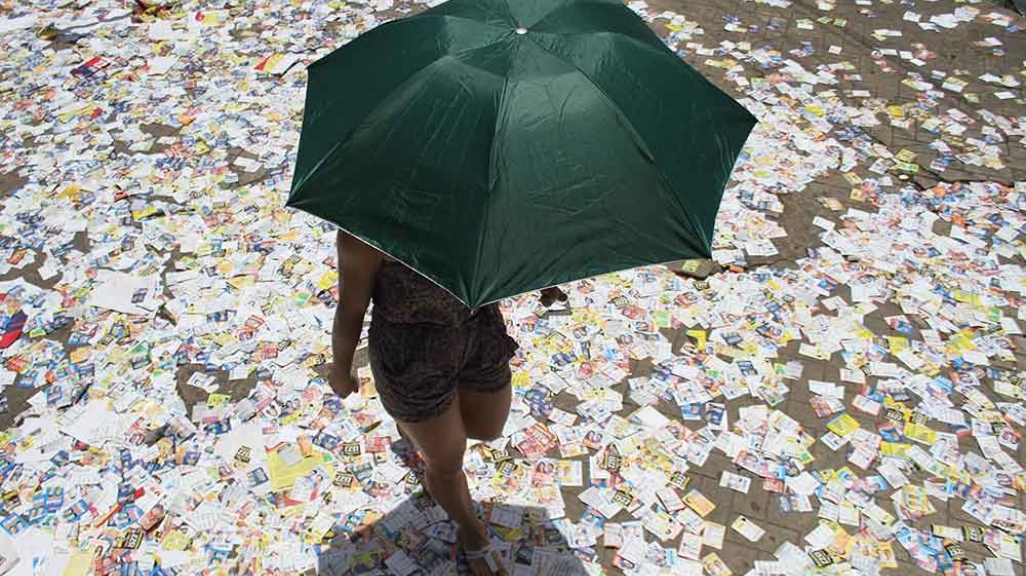 A voter steps on campaign flyers in Brazil. (AP)

By Luisa Leme and Meg Healy

Given voter disillusionment with traditional politics, the country’s parties are rebranding to rebuild their influence. A year before general elections, we profile the parties.

As Brazil hits the one-year mark before the 2018 general elections, the country’s political parties face a task that could prove more difficult than winning votes: persuading Brazilians to trust the system. An Ipsos study from July showed that only 6 percent of Brazilian voters feel represented by their elected officials.

Campaigns for next year’s presidential and legislative elections officially start in 2018, but political parties are already working to disassociate themselves from the public’s disillusionment with traditional politics. One tactic? Rebranding. Over the last decade, several of Brazil’s political parties filed requests with the Supreme Court to formally change their names. Some are trading long names that necessitate acronyms for catchier slogans that convey a new brand. For example, the National Labor Party (PTN), inspired by former U.S. President Barack Obama’s 2008 campaign slogan, has become We Can (Podemos). The National Ecologic Party (PEN) is now Patriot (Patriota). The Labor Party of Brazil (PTdoB), hoping to eliminate the letters “PT” from its acronym to distance itself from Brazil’s Workers’ Party (PT), is now Avante—or Forward. Others have chosen to simply shorten their names: Christian Democracy (Democracia Cristã) was formerly the Christian Social Democratic Party (PSDC), and the Progressive Party (PP) is rebranding as simply Progressives. Many have removed the word “party” entirely from their names.

In August, the governing Brazilian Democratic Movement Party, known for years as PMDB, also unveiled a plan to change its name back to the Brazilian Democratic Movement (Movimento Democrático Brasileiro, MDB), the name it used from 1966 to 1979 when it had the goal of uniting political factions opposed to the military dictatorship. Party leaders justified the decision as necessary to win over an electorate seen as increasingly hostile to the political establishment. One recent poll found that 80 percent of Brazilians would prefer to elect “new faces” over incumbent politicians.

Members of the judiciary such as the former Prosecutor General Rodrigo Janot and the head of the Supreme Court Cármen Lúcia have higher approval ratings than politicians, while outsiders such as São Paulo businessman-turned-mayor João Doria and television personality Luciano Huck pose electoral threats to traditional politicians. In addition, the number of new parties in the process of legally forming—those gathering nearly half million signatures and registering with the Supreme Court—more than doubled in the last two years. One explanation for so many new groups is a new law requiring elected federal, state, and municipal lower house legislators to have a new affiliation in case they choose to leave their current parties, as Brazilian elections don’t allow for independent candidates.

Along with the presidency, all 513 seats in the Chamber of Deputies and two-thirds of Senate seats (54 out of 81) are up for election next year, and 28 parties currently hold seats in Congress. To better understand the partisan dynamics in Brazil, AS/COA Online examines the key parties and politicians shaping Brazilian politics.

The three largest parties combined hold nearly half of the seats in the Senate, a third of seats in the lower house, and two-thirds of the 27 governorships. Because of their high levels of congressional representation and coalition power, these parties snatch up a larger portion of publicly available campaign funds, and their candidates typically get more time on television and resources to make campaign stops throughout the continent-sized country.

Brazil had a strict two-party system under the military dictatorship from 1965 to 1979, consisting of the regime’s National Renewal Alliance Party and the “big tent” opposition party, the Brazilian Democratic Movement. PMDB was established in 1981 after the dissolution of the two-party system, at which point it adopted a center-right orientation but avoided a strict adherence to any one political ideology.

Numbers and past presidencies: 18 seats in the Senate, 61 in the Chamber of Deputies, 7 governorships. Presidents include José Sarney (1985–1990) and Michel Temer (2016–present).

2018 prospective candidate: The party faces a talent deficit, given that many of its leaders have been implicated in the Lava Jato investigation. Temer, who is not permitted to run for reelection, publicly invited Doria to run on the PMDB ticket in August, but Doria declined, though many expect him to still run with another party. One other option may be Nelson Jobim, a former defense minister and Supreme Court justice.

Corruption scorecard: Temer, one-third of his cabinet, and several PMDB leaders are under investigation for corruption. Former Chamber of Deputies President Eduardo Cunha is serving a 15-year sentence for graft. In September, the Brazilian prosecutor general’s office charged Temer with racketeering and obstruction of justice. The president and six other PMDB political leaders were charged with pocketing $188 million in bribes.

The Workers’ Party was founded in 1980 by a coalition of labor unions, leftist intellectuals, and social justice groups opposed to the military dictatorship. While it originally espoused traditional democratic socialist values, it has since moderated toward a center-left orientation.

Numbers and past presidencies: 9 seats in the Senate, 57 in the Chamber of Deputies, 5 governorships. Controlled presidency from 2003–2016 during the administrations of Luiz Inácio Lula da Silva and Dilma Rousseff.

2018 prospective candidates: Like the PMDB, the PT has few prospective candidates that have both name recognition and a clean record. Even after a corruption conviction, Lula could well run for a third term next year; he is appealing the conviction, kicked off a tour of northeastern states in August, and leads election polls. If Lula does not run, former São Paulo Mayor Fernando Haddad could be an option, although he lost his 2016 reelection bid to Doria.

Corruption scorecard: The Lava Jato investigation has delivered heavy blows to the party’s reputation. In July 2017, Lula was found guilty of corruption and money laundering and sentenced to nearly 10 years in prison.

The PSDB emerged from the original MDB coalition following democratic transition, forming officially in 1988 as a centrist party. Despite overlapping ideological and policy platforms with the PT, PSDB has maintained a rivalry with that party since its founding, and the rivalry has only intensified over the years, culminating with PSDB’s support for the 2016 impeachment of Rousseff.

Numbers and past presidents: 11 seats in the Senate, 45 in the Chamber of Deputies, 6 governorships. The party held the presidency under Fernando Henrique Cardoso (1995–2002).

2018 prospective candidates: PSDB is arguably faring the best of the three largest parties in terms of viable candidates. Doria, four-time Governor of São Paulo Geraldo Alckmin, former Foreign Relations Minister and Senator José Serra, Senator and ex-Governor of Ceará Tasso Jereissati, and even Cardoso are frequently cited as exploring bids. Amid media speculation about who will be the party’s pick, Alckmin and Doria are PSDB’s leading pre-candidates.

Corruption scorecard: Several PSDB presidential candidates, including Alckmin and Serra, were tied to the Lava Jato investigation, mostly for having received illicit campaign funds from construction companies. In July, Janot formally requested the arrest and removal from office of PSDB Senator Aécio Neves, who narrowly lost his presidential bid against Rousseff in 2014, for obstruction of justice and corruption.

Some of the most frequently cited anticipated candidates enjoy large public profiles but claim membership with small parties. As recent surveys show that 91 percent of Brazil’s voters think no party is free of corruption, being part of a lesser-known political group does not seem to affect these candidates. But while their distance from the larger parties allows them to posture as outsiders, political consultant Ricardo Sennes warned that it’s difficult for them to make up for the advantages—like more air time and public funds—available to established, larger parties. “The feasible candidates are the ones who are well structured in terms of political parties,” said Sennes.

In numbers: 1 seat in the Senate and 4 in the Chamber of Deputies.

Big name: Former Environment Minister and Senator Marina Silva founded this party in 2013 after she left the PT in protest of the party’s environmental policies. REDE was formalized in 2015. During the 2014 presidential race, Marina Silva ran on the Brazilian Socialist Party ticket, replacing the late Governor of Pernambuco Eduardo Campos, who died in an airplane crash during his 2014 presidential campaign. Silva previously ran an unsuccessful but much-watched campaign for president in 2010 as the Green Party candidate. A former maid, committed environmentalist, and devout Evangelical, she appeals to voters across the political and economic spectrum.

In numbers: 3 seats in the Chamber of Deputies.

Big name: The PEN was founded in 2012 as a center-right and environmentalist party, with intentions of attracting Silva as its presidential candidate at that time. Patriot’s ideology—and name—changed once the party embraced conservative and ultra-nationalist ideas to attract the far-right Congressman Jair Bolsonaro. The party opposes same-sex marriage, abortion, and gun control. Bolsonaro, from Rio de Janeiro, has raised his national profile by making incendiary statements over the course of his career, and is currently facing trial before Brazil's Supreme Court for inciting violence after he told a female congresswoman that she did not deserve to be raped by him. Bolsonaro is not yet officially a member of Patriot, but the party is presenting him as its presidential candidate during next year’s campaign cycle. The former Army captain, known for his homophobic and sexist outbursts, has clocked some of the biggest gains among potential candidates in recent months and placed second in October presidential polls behind Lula.

In numbers: 3 seats in the Senate, 21 in the Chamber of Deputies.

Big name: Founded in 1979 in Lisbon, Portugal, while members such as Leonel Brizola were in exile during the military dictatorship, this party has leftist roots. Ciro Gomes—who has served as mayor, congressman, governor, and finance minister in various political parties—ran for president in 2002. Gomes then supported the PT presidential campaigns in recent years, but his antiestablishment message made him a progressive alternative. PDT President Carlos Lupi described the Gomes presidential ticket as a done deal, given that the politician is able to notch 10 percent support in national polls, although in scenarios not counting Lula as a candidate.

With 28 parties holding seats in Congress, forming alliances is crucial to securing majority rule. Brazil’s coalitions, while steered by the three big players, rely on the participation of smaller parties to pass legislation. These small parties also represent extremes in the country’s political spectrum, making their mark in the more fragmented Chamber of Deputies.

The Social Democratic Party (Partido Social Democrático, PSD) might have a presidential bid should Finance Minister Henrique Meirelles accept its invitation to run. The Socialism and Liberty Party (Partido Socialismo e Liberdade, PSOL) backs a platform for marijuana and abortion legalization, as well as LGBTQ rights, antiracism legislation, and environmental protection. The party embraced several politicians disappointed with PT, such as Deputy Francisco “Chico” Alencar, frequently cited as the party’s possible presidential candidate and considered one of the cleanest politicians in Congress. Another one of PSOL’s well-known politicians, Deputy Jean Wyllys, is one of the country’s most popular politicians on social media.

On the other side of the political spectrum, the Democrats party (Democratas, DEM), formed in 2007 to replace the Liberal Front Party, holds the presidency in the lower house where it holds 29 seats. Despite initial intentions to push Chamber of Deputies President Rodrigo Maia as their candidate, DEM is now looking for new names for a presidential ticket, including Doria and Huck. But this party, rooted in the group that represents the 1980s transition between military dictatorship and democracy, faces the highest rejection levels in the country today.

Here is a breakdown of how many seats each kingmaker party holds in Congress.