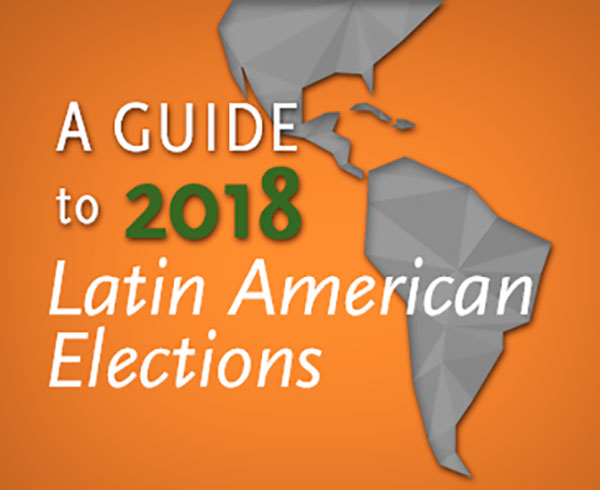 On October 7, 2018, more than 147 million people were eligible to vote for executive and legislative branches at the state and federal levels, casting ballots for president, 27 governors, 54 senators (two-thirds of the Senate), 513 federal deputies, and 1,059 state deputies.

In an October 28 runoff, far-right candidate Jair Bolsonaro won 55 percent of the vote against 45 percent for the left's Fernando Haddad. In a sign of voter dissatisfaction, the runoff involved the largest abstention rate in 20 years. In total, 42 million people didn't choose any of the candidates and over 31 million people decided not to show up at the polls at all.

Pitching himself as the answer to violence and corruption, Bolsonaro's victory has drawn human rights concerns due to his use of bigoted language and nostalgia for the period of military rule. Aside from marking a hard shift to the right, his win also saw a departure from what's been traditional in Brazilian politics since the start of the country's democratic era: he did not win through coalitions with larger parties or television time, but with the help of social media and fake news.

Bolsonaro will be inaugurated on January 1, 2019.

>> Find out about other elections in our main 2018 Election Guide.

Explainer: Bolsonaro, Brazil, and the Environment

Is Brazil’s environment in danger under Jair Bolsonaro?

Experts discussed the next steps for President-elect Jair Bolsonaro and how his first measures can affect the country's economy.

LatAm in Focus: What a Bolsonaro Win Means for Brazil's Economy

Jair Bolsanaro and Fernando Haddad face each other in an October 28 runoff. Here's what the polls say.

Ahead of the October 28 runoff, we look at the presidential candidates’ positions on issues ranging from Venezuela to trade.

What to Expect from Jair Bolsonaro

A comprehensive survey of what the former army captain’s government might look like, if he wins on Oct 28.

We look at the history of presidential runoffs, break down the vote regionally, and map the gubernatorial races still to be decided in October 28 runoffs.

Meet the New Brazil. A Lot Like the Old Brazil.

Social media is driving the conversation—and a wedge between genders—in this year's presidential vote.

Brazil Election: It's Bolsonaro vs. Haddad in the Presidential Runoff

LatAm in Focus: Who Will Win Brazil's Nostalgia Vote?

Explainer: A Who's Who in Brazil's 2018 Presidential Election Race

Ahead of the October 7 first round, meet the contenders in Brazil’s unpredictable race.

Brazil's Gubernatorial and Legislative Races-and What Worries Voters Most

On October 7, Brazilians will elect 27 governors and 567 members of Congress. We look at those competitions and top voter issues.

Podcast: Can Anyone Fix Brazil's Economy?

Economist Monica de Bolle discusses the prospects of a fiscal turnaround under Brazil's next president on this episode of "Deep South."

Panelists discussed top issues ahead of the country's October elections, as well as each presidential candidate's economic platform.

Given the tempestuous nature of Brazilian politics in recent years, here are dates to help bring clarity as we approach the October 7 elections.

The imprisoned former president will be center stage in the Oct. 7 election – even if he’s not a candidate.

A leading candidate for president sounds off on his rivals – and friends.

With four months to go until election day, a Datafolha poll shows a jailed ex-president ahead. What happens if he can’t run remains in doubt.

How significant is the under-35 electorate in Brazil, Colombia, and Mexico?

Geraldo Alckmin is the preferred candidate of Brazil’s establishment. In today’s environment, that may be a kiss of death.

Given voter disillusionment with traditional politics, the country’s parties are rebranding to rebuild their influence. A year before general elections, we profile the parties.

System Failure: Behind the Rise of Jair Bolsonaro

How a retired Army captain rose from a marginal apologist for torture and dictatorship to a serious contender for Brazil’s presidency.

If 2017 was the year that changed Washington, 2018 will redefine Latin America. AS/COA experts explain how in our first podcast of the year.

Latin Americans will vote for nine new presidents in two years, along with more than 2,900 legislators.

Listen: Prospectiva Consulting’s Ricardo Sennes explains how the country’s economy is moving forward and what a presidential candidate will need to do to win the 2018 election.