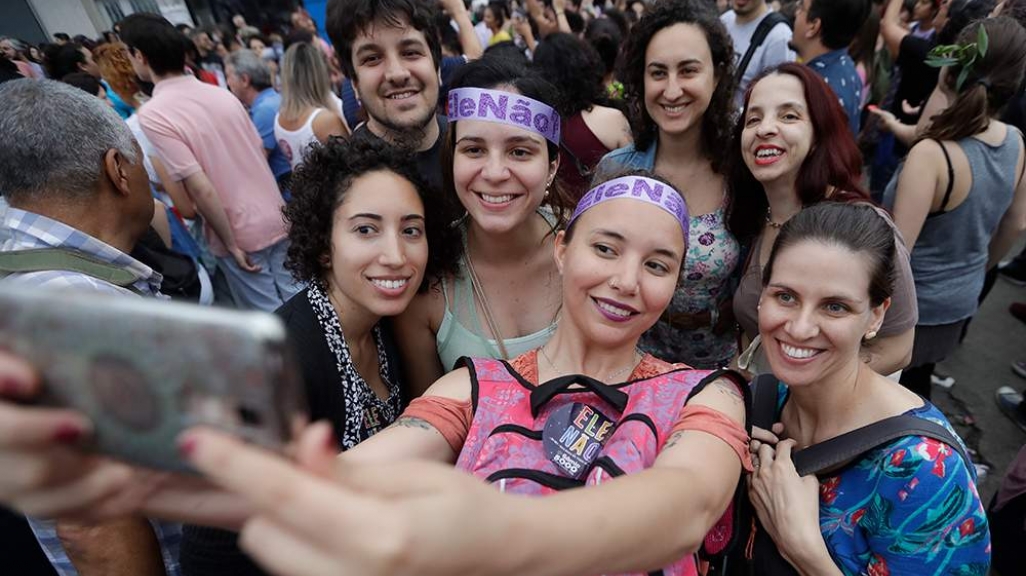 By Elizabeth Gonzalez and Brian Harper

Social media is driving the conversation—and a wedge between genders—in this year's presidential vote.

Election drama is nothing new to Brazilians. In 2014, the candidate polling third died in a plane crash less than two months before election day. This time around, the frontrunner, Jair Bolsonaro, was stabbed during a September 7 rally and only left the hospital on September 29. On top of that, the current electoral scenario is considered to be among Brazil’s most polarized. One factor playing into the divide is social media and its expanding role on the campaign trail. We look at how these platforms do and don’t contribute to the conversation and how they’ve helped define the vote along gender lines even more so than left vs. right.

Check out our Brazil Election Guide, as well as a breakdown of the presidential candidates and how they're faring in the polls.

Like most of the world, Brazil has gone digital. Of its 210 million citizens, 139 million use the Internet, and 130 million are active on social media, according to Hootsuite and We Are Social’s 2018 Digital Yearbook. While this puts Brazil ahead of global rates, it is still slightly behind South America’s 68 percent Internet penetration and 63 percent social media use.

Despite digital proliferation in Brazil, television remains a top news source for voters. Nearly 45 percent of respondents in a September 2018 CNT/MDA poll said television and radio are the most influential media in determining the candidate they will support, followed by social networks at 27.6 percent. Fewer than half of respondents had seen candidates’ advertisements on the Internet or social media.

In Brazil, candidates cannot purchase airtime, but they are given two slots of state-funded TV airtime three days each week. For the first round of voting, the Supreme Electoral Court divides 10 percent of TV and radio airtime evenly among presidential candidates, while 90 percent gets divided proportionally based on each candidate’s coalition size in Brazil’s Chamber of Deputies.

Still, does TV time matter as much as it seems? The Brazilian Social Democratic Party’s (PSDB) Geraldo Alckmin should then hold the greatest advantage, given that the PSDB’s coalition of five centrist parties backing him allots him five minutes and 32 seconds out of a total 12 minutes and 30 seconds available. Yet, the former São Paulo governor has been stagnant in the polls, ranking fourth while his competitors with less TV time come out ahead. The frontrunners—Bolsonaro from the Social Liberal Party (PSL) and Fernando Haddad of the Workers’ Party (PT)—receive eight seconds and two minutes and 23 seconds respectively.

Bolsonaro has made up for his relative absence on TV screens with a massive social media presence. He has 6.6 million Facebook followers—2.8 million more than Luiz Inácio Lula da Silva, Brazil’s most popular president in history. Bolsonaro has also capitalized on the Facebook-owned app WhatsApp as a way to promote his agenda. The messaging tool is the most popular social media platform in South America, and roughly 60 percent of Brazilians use it.

“[One] thing we will hear for the last time in this election is about the supremacy of television and how social media doesn’t matter that much,” Americas Quarterly Editor-in-Chief Brian Winter told AS/COA Online’s Elizabeth Gonzalez in a podcast. “This was a social media driven election.”

AS/COA Senior Director of Policy Roberto Simon noted in the same episode that social media has driven the conversation while TV has been more reactive, even though television has historically helped unknown candidates in the same way that it’s helping Haddad, who has more than doubled his poll numbers since Lula dropped out of the race.

As in other democracies, there is a rising concern about fake news spreading across social media in Brazil, with rumors circulating about leftist activists beating up older conservative voters or Venezuela rigging voting machines. But just as these new media aid in the proliferation of sensational and false headlines, they help organize and empower new citizens’ movements.

In this year’s election, there is no better example than the rise of #EleNão (#NotHim). The movement has its roots in a Facebook group called “Women United Against Bolsonaro,” which gained 1 million members in less than two weeks after it kicked off at the end of August, uniting Brazilian voters against the PSL candidate, who publicly stated that having a daughter was “a moment of weakness” and told a fellow congresswoman that “I wouldn’t rape you because you don’t deserve it.” But on September 13, the group was hacked by Bolsonaro supporters that changed the name to “Women United With Bolsonaro”—a screenshot of which the candidate shared on Twitter.

The Facebook group’s owner Ludmilla Teixeira then vowed to take the movement to the streets under the motto #EleNão. A week out from election day, tens of thousands of Brazilians protested against Bolsonaro across 114 cities, marking the largest female demonstration in Brazil’s history, as well as of one of the largest against a presidential candidate overall. However, IBOPE’s poll published the day after the protests shows support for the PSL candidate grew 6 percentage points among women. With 18 percent of the female electorate, Bolsonaro technically has just as much support as the PT’s Haddad, which maintained 20 percent of the female vote in Ibope’s September 29–30 poll.

Nonetheless, rejection rates for Bolsonaro remain much higher and could play an important role in the anticipated runoff on October 28, when the female vote could be a determining factor. In Datafolha’s September 26–28 poll, Bolsonaro’s overall rejection rate is 46 percent, but that number rises to 52 percent among women, while it’s 38 percent among men. The BBC reports that this counts as the greatest voting gap between the genders since the end of the Brazilian military dictatorship.