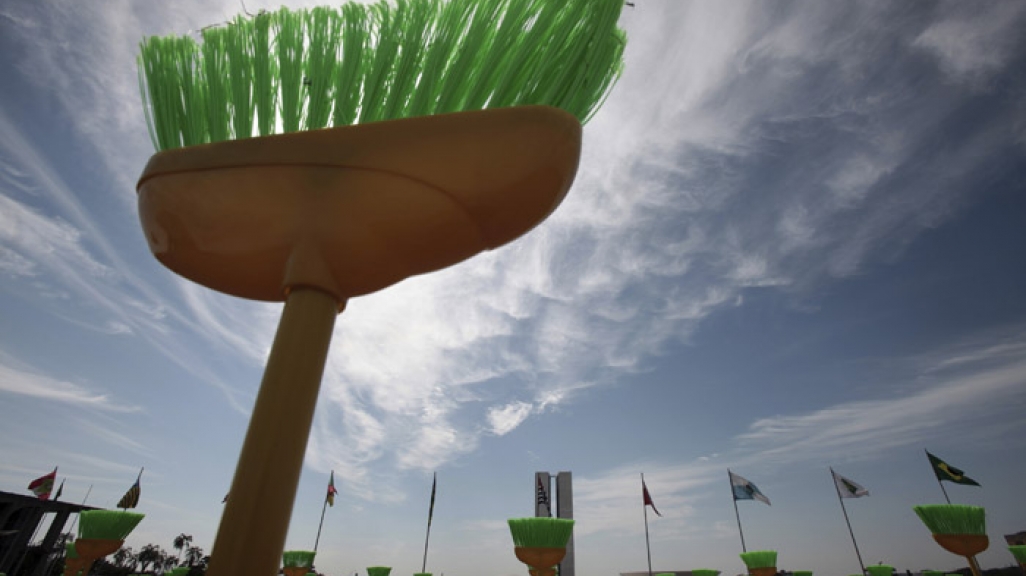 An anti-corruption demonstration in Brasilia. (AP)

By Rachel Glickhouse and Luisa Leme

Intended to bar corrupt candidates from office, the legislation will be in place for the first time during a national-level election in October.

This year, for the first time, Brazil will have its “clean record” law in place during a national-level election. Passed in 2010, the legislation—which aims to bar corrupt candidates from office—gained approval given the country’s concerns about political malfeasance. A June 2014 Pew Center poll, for example, found that 78 percent of Brazilians think political corruption is a serious problem, and a 2013 Transparency International survey showed that 72 percent of Brazilians think their congress is corrupt. AS/COA Online takes a look at how the law emerged and how it will be applied during this year’s general election.

How the Law Came to Be

The legislation first came about through a popular petition. In 2009, the Movement to Combat Electoral Corruption—a group representing more than 40 civil society organizations, non-profits, and religious associations—collected over 3 million signatures to submit a bill before Congress. Congress passed the bill in May 2010; it is only the fourth time a law originating in a petition passed Congress since 1988. Then President Luiz Inácio Lula da Silva signed it into law the following month. The legislation alters a 1990 law setting rules about candidate eligibility.

Known as the “Lei da Ficha Limpa,” or Clean Record Law, the legislation bars candidates from running for public office for eight years if they have been convicted of a serious crime, lost their political positions due to corruption, or resigned to avoid impeachment. The law is retroactive, meaning that it applies to those that already have a criminal history.

Constitutionality Issues and Applying the Law

Although the law technically went into effect in June 2010, questions about constitutionality kept the legislation from fully functioning until the 2012 elections.

First, in 2010, the country’s top electoral court ruled that the law would be valid during the October national elections that year, and the Supreme Court agreed it would rule on the legislation. In September—just a month before the vote—the justices decided that the law would count. Consequently, electoral authorities disqualified over 130 candidates that were considered ineligible under the legislation.

However, in March 2011, the Supreme Court issued another ruling saying that the law did not actually count during the election, and would only be valid beginning with the 2012 local elections.  Resolving the issue of legality, the justices voted in favor of the law’s constitutionality in February 2012.

After the twists and turns on the legal battlefield, the law went into effect for the municipal elections in October 2012. Congresso em Foco, a legislative watchdog group, found that around 1,200 candidates were ineligible for the local vote. But because of the ability to appeal, many “dirty record” candidates could remain on the ballot and continue campaigning until the court decided, which would ultimately determine whether they could take office. Ahead of the election, courts barred over 300 candidates based on the law. Nonetheless, over 2,200 of these candidates ran in the election due to delayed appeals, which were considered by courts after the election. In fact, nearly 20 appeals had yet to be heard as of May 2014.

The Law in Action for the 2014 Election

Brazilians will elect the next president, legislators, and governors on October 5. Around 25,000 candidates are registered to run for office. As of August 21, Brazil’s attorney general’s office questioned the candidacies of more than 4,000 political hopefuls for registration irregularities; nearly 500 claims were based on the clean record law. São Paulo’s electoral prosecutor, André Carvalho, told Globo’s G1 that with the proper application, the law stands to improve public administration.

Based on the legislation, anyone registering as candidate for president, governor, senator, and federal or state representative may have their candidacy questioned. Regional prosecutors from over 200 offices nationwide, as well as political parties, can officially challenge a candidate’s legitimacy by filing a lawsuit at the regional electoral courts within five days of the candidate’s registration. Then, decisions are up to these tribunals, which determine if the candidate can run for office or not. After the court reaches a decision, both the candidate and prosecutors can appeal the decision to higher courts.

To speed up identifying ineligible candidates, the attorney general’s office created the System for Investigations of Electoral Accounts—given the five-day time frame to register a claim. The system compiles data at the federal level from several local institutions, logging convictions for mismanagement of public funds and other crimes covered by the clean record legislation. As of August 15, regional prosecutors’ offices filed more than 430 suits to challenge candidacies in all 26 states and the Federal District.

Of the nearly 500 candidacies questioned by the attorney general, more than half are due to irregularities with the Court of Accounts, which audits public spending. The second largest number of these questioned candidacies involve previous condemnations or current criminal lawsuits, and the third most common cause stems from condemnations for mismanagement of public resources or unjust enrichment. São Paulo and Minas Gerais are the states with the most candidacies under scrutiny.

In São Paulo, the state with the largest number of voters nationwide, there are more than 2,000 disputed candidacies, 70 of which the regional prosecutor’s office issued. As of August 20, São Paulo’s Electoral Court rejected 18 candidacies with “dirty records," though candidates can still appeal. The main reasons were irregularities with the Court of Accounts, mismanagement of public resources, and a criminal record. Of the 70 candidacies in dispute, five are up for reelection as federal legislators.

Some of the candidates who could be barred under the law are well-known politicians. Congressman Paulo Maluf, who has a record of corruption investigations, had his candidacy questioned by the attorney general’s office. In 2010 Interpol placed him on a wanted list, meaning he runs the risk of arrest if he travels abroad. A ruling on his candidacy is pending. Also, former Rio de Janeiro Mayor César Maia will not be able to run for the Senate, as the Rio de Janeiro Electoral Tribunal rejected his candidacy based on mismanagement of public money. Back in 2012, a Rio court suspended his political rights for five years due to the illegal construction of a church funded with public money. Former Federal District Governor José Roberto Arruda, who is leading the polls, was barred from running for the same office again this year, but he appealed the decision and is continuing his campaign.

Clean-record disputes involving current lawmakers ahead of this year’s election reveal some of the challenges and loopholes in the law. There are 27 federal legislators with disputed candidacies: 26 deputies and one senator. Nine of them were approved by regional electoral tribunals, but the decisions were appealed in an effort to block their candidacies. On the other hand, some rejected candidates have appealed the decision in higher courts and continue to run for office. But some have opted for another route. For example, in July, Mato Grosso Senator Jayme Campos resigned before the electoral court decision decided on the claim against his candidacy. Santa Catarina Congressman João Pizzolatti also decided to abandon his reelection race after being rejected by the first electoral tribunal; his son is now running in his place.

Plus, prosecutors are facing a challenge to applying the law: time constraints. As this is the first time regional electoral tribunals are applying the law, attorneys’ offices are struggling to gather all necessary documentation possible and file suits within five days. Although electoral courts had until August 21 to judge cases filed, higher courts do not have a deadline to solve appeals. Brazil’s Superior Electoral Court estimates all lawsuits will be judged by October 5, the date of the election.

The increasing number of electoral lawsuits and workload for the courts is another dilemma. Brazilian legal experts have pointed to the increasing “judicialization of the electoral process,” saying more lawsuits are flooding the system because of legislation like the clean record law. In less than a decade, electoral lawsuits during non-election years more than doubled. As a result, the country’s bar association requested electoral law become mandatory on law school curricula.