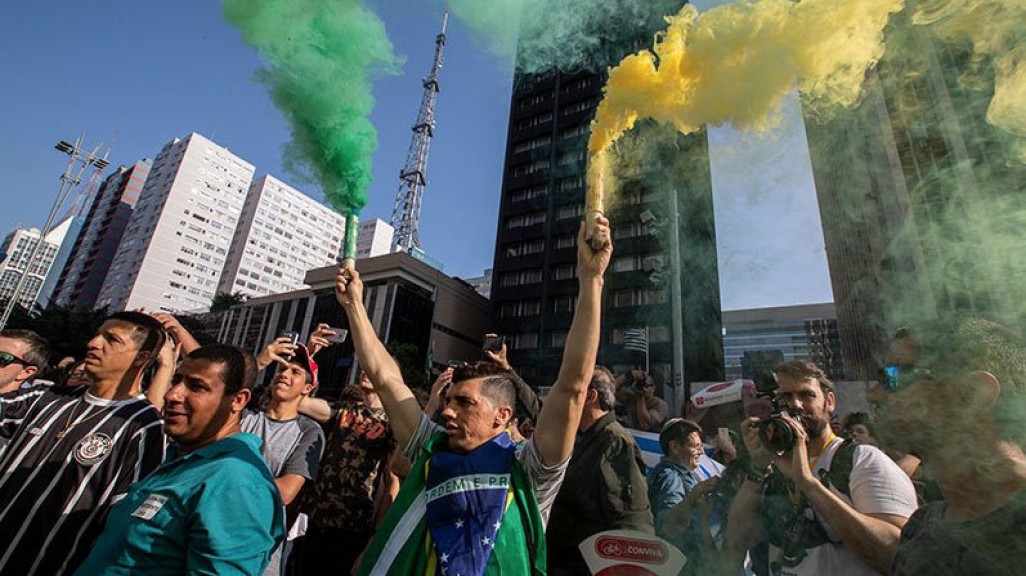 Bolsonaro supporters at a rally in Brazil. (AP)

Brazil Election: It's Bolsonaro vs. Haddad in the Presidential Runoff

By Elizabeth Gonzalez and Carin Zissis

For those who monitored Brazil's polls, it comes as little surprise that pro-gun, far-right Jair Bolsonaro will end up facing off against Fernando Haddad, the left's stand-in for ex-president Luiz Inácio Lula da Silva, in an October 28 runoff for Brazil's presidency.

But Bolsonaro came closer than expected to completely avoiding a second round. With nearly all votes counted on the night of October 7, Bolsonaro—who's known for his homophobic, bigoted comments, as well as his nostalgia for Brazil's military dictatorship—pulled in 46 percent of the vote. That's compared to 29 percent for Haddad, a former São Paulo mayor working to stand out in Brazil's short campaign cycle as he replaces Lula, who polled first but sits in jail for corruption and was blocked from running by the country's top electoral court. While there were more than a dozen candidates in the race, abstentions, blank, and null votes accounted for another 29 percent of the vote, which is more than double what third-place Ciro Gomes earned.

A series of maps by Folha de S. Paulo tracks how Brazilian voters shifted toward and away from Lula's Workers' Party (PT) between 1998 and this year's first round. And, with just three weeks to go until the runoff, Haddad has a lot of ground to cover if he's going to overtake what's being called the "conservative wave" in Brazil. “The path for Haddad to close that gap looks almost impossible," AS/COA Vice President and Americas Quarterly Editor-in-Chief Brian Winter told The Guardian. “This idea that Bolsonaro can save the country and make it safe for people to walk on the streets at night and tend the corruption in Brasilia and make a dent in 13 million unemployed—that’s an idea most Brazilians now seem to have bought.”

Beyond the presidency, voters selected two-thirds of the Senate, the entire lower house in Congress, 1,059 state legislators, and all 27 of its gubernatorial seats.

Bolsonaro has sat out a large portion of the campaigns after a near-fatal stabbing at a rally last month. Part of the former military captain's success can be explained by the importance Brazilians have placed on security as a top electoral issue. A congressman for 26 years, he has pledged to give police carte blanche in order to reduce Brazil’s annual 60,000-plus homicides, and he and his followers frequently make gun gestures with their hands. Bolsonaro has also sought to stand out as an anti-corruption candidate in a country plagued by scandals that tarnished a wide swathe of parties and officials and contributed to Brazil's political turmoil, which included the 2016 impeachment of President Dilma Rousseff, Lula's handpicked successor.

Moreover, Brazil's business community appears, per the Associated Press, to be opting to "hold its nose" and back Bolsonaro. Brazilian markets rallied after his October 7 win.

In a victory speech delivered over Facebook on Sunday night, Bolsonaro said the electoral process offers two paths: "One of prosperity, liberty, family—or one like that of Venezuela." He suggested that Lula exerts control over Haddad, adding, "We don't want to see the return of these type of people...They drowned the country in its greatest economic, moral, and political crisis, and we can't give the left another opening." After results were in, he expressed doubts about Brazil’s electoral systems and implied that he possibly should have won in the first round.

Amid a divisive race, Haddad faces the tough choice of deciding whether to move more to the center or to the left. In the meantime, he needs to win over the supporters of the losing candidates. On election night he indicated that he had already spoken to three of his former rivals—Guilherme Boulos, Ciro Gomes, and Marina Silva.

More resources on the vote: