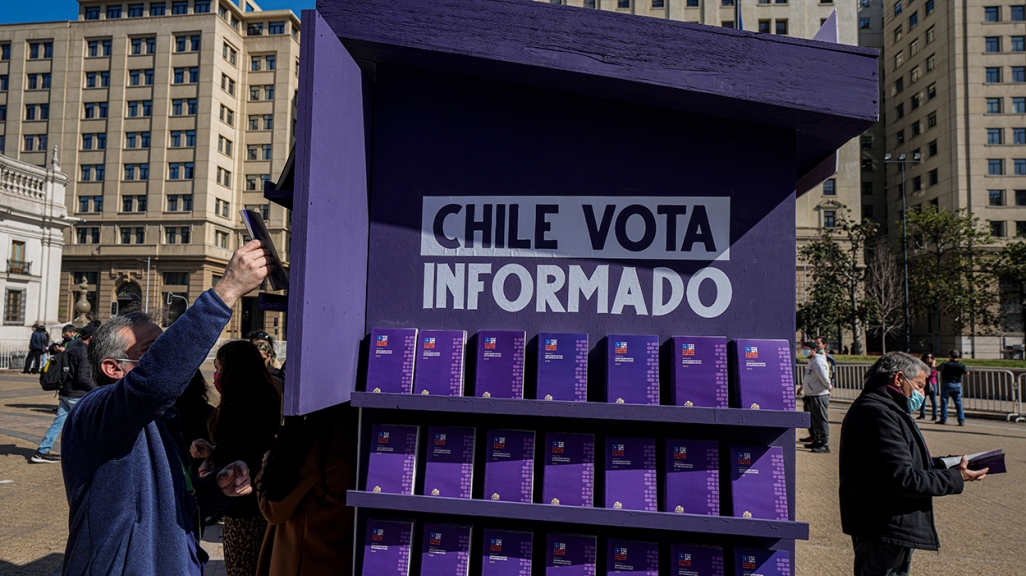 Copies of the draft Constitution in Chile. (AP)

What to Watch in Chile's Constitutional Plebiscite

On September 4, Chileans will vote on a matter monopolizing public debate: whether to replace the nation’s Constitution. At the ballot box, they will choose to either “approve” or “reject” a proposed document completed by a Constitutional Convention in July. For the past two months, proponents for both sides have been making their cases across media and the country. As Isabel Aninat, dean of the Faculty of Law at Universidad Adolfo Ibáñez, put it, “It’s a weird time. We feel in limbo.”

Ahead of the vote, AS/COA Online spoke to experts about the plebiscite, the issues that are featuring prominently in the debate, and what the result will mean for the future of the country and the government of President Gabriel Boric.

The debate has dominated Chilean conversations

In a recent survey, 86 percent of Chileans said they frequently or often speak about the proposed Constitution with those around them. Alejandra Matus, an award-winning journalist at Chile’s Catholic University, said: “There is a lot of conversation in social networks, but also in the streets, over Sunday lunches, and in any gathering—even in parties. I've been at parties to celebrate whatever events, and people immediately start talking about the plebiscite.”

The debate is also omnipresent in the news. Chilean law mandates television time—known as franjas—dedicated to propaganda from each side. TV channels feature nightly primetime debates between advocates for each side, with major figures weighing in on whether to approve or reject.

The debate over a new Constitution is nothing new in the country, though. “We've been talking for two, three years already,” Matus said, referencing the long journey leading to the plebiscite. Since protests that rocked the country starting in 2019, questions about the role of the Chilean government and the country’s economic model have risen in prominence. Already, the country voted in 2020 to rewrite its Constitution and, in 2021, for who delegates to the Constitutional Convention should be.

The debate also has deep emotional roots. The current Constitution was written during the reign of dictator Augusto Pinochet. Matus noted that today’s campaigns are comparably heated to the debate around the 1988 referendum over whether Pinochet should remain in power.

Ahead of the September 4 plebiscite, see where Chileans stand on approving or rejecting the new Magna Carta.

The proposed Constitution comes in at 388 articles, making it one of the longest in the world. But the debate in the country isn’t always focused on specific provisions. “On the deepest level, the positions are not about the text,” said Matus. “The positions are about what its consequences could be.”

For the approve side, that vision is one of a progressive and broadly inclusive future, what Matus calls “a new era of politics and institutions where the rules of engagement have changed in the deepest sense—for example, with the participation of women, the recognition of original nations, or the recognition of care work.” The Constitution mandates gender parity in state institutions, reshapes governing bodies like the Senate, and decentralizes the government.

Issues of representation, such as plurinationality, have featured strongly in the “approve” case, alongside the social rights around the environment, housing, pensions, and healthcare. On these topics, Andrés Velasco, former Chilean finance minister and current dean of the School of Public Policy at the London School of Economics, explained that the debate is more about feasibility of guaranteeing the rights outlined in the draft document. “I don’t think anybody is against the idea that the Constitution should contain a clear and ambitious set of rights,” he said. “How do you ensure that those rights are enforced as opposed to something that just gets spelled out on paper?” Without the correct institutions and financial support, these rights are aspirational, he noted.

The “reject” campaign, on the other hand, “is concerned about the kind of political system that is being set up which they feel is exclusionary, which will lead to a lack of governability and hurt the economy,” explained Robert Funk, a political scientist at the University of Chile.

Indeed, questions around the political institutions in the new document—including changes to Congress, changes to the budgetary process, reforms to the judicial system, and the absence of reforms around the electoral system—are central to the “reject” vote. Velasco expressed particular concern about the changes to fiscal institutions and checks and balances. “Chile has a stellar fiscal record and that’s because it has strong institutions. The executive power has legal tools to control expenditure and issuing of debt. Those safeguards and tools will be severely weakened [under the proposed Constitution],” he said.

Misinformation has been rampant

The draft Constitution was written by a 155-member elected assembly over the course of a year starting on July 4, 2021. The Convention’s proceedings, including debate and votes on proposed articles, were broadcast to the public. Provisions—like giving the government mining rights to lithium or guaranteeing the right to housing—were voted upon but rejected. But misinformation has lingered that they, along with other fake articles, remain in the draft.

Much of the misinformation involves cherry-picking of language from the document’s text leading to confusion or exaggerations about how provisions will be actualized.

One major example involves property rights and a perception that the new document permits the government to seize one’s home. Instead, the Constitution states that expropriation is not allowed “except by virtue of a law that authorizes expropriation for reasons of public utility or general interest declared by the legislator." Other hot-button issues that have ended up being the subject of misinformation include reproductive rights, migration, and water rights. Misinformation is being spread through social networks, WhatsApp, and even the franjas. To combat misinformation, the government authorized the printing of 900,000 copies of the Constitution for distribution.

But Aninat points out that “a lot of the debate is about possible interpretations of the articles, which is not misinformation.”

Voting is mandatory for the first time in a decade

Since 2012, voting has been voluntary in Chile, though registration is automatic. Turnout tends to involve under half of the electorate, and it hit a record a record 55.7 percent in the 2021 presidential elections. But in the case of this referendum, voting will be mandatory due to a 2019 constitutional reform. Chilean citizens who do not vote and lack a proper excuse will have to pay a fine of $30 to $200, depending on income level. Aninat explained that the “memory of being fined is stronger in the older generation. It’s hard to say how much the weight of possibly receiving the fine will be.”

More than 15 million Chileans are eligible to vote in the plebiscite. According to official data, over 13 million Chileans used an online service to look up their polling information. Funk explained this may be more an indicator of the significance of the referendum than a function of mandatory voting. “Turnout tends to be high when elections matter. You get the sense that people think the stakes are high,” he said. Velasco added that most predictions put turnout at around 66 to 70 percent.

The path forward—in any scenario—is unclear

“Whatever happens Sunday, this discussion in Chile will continue for at least a decade to come,” explained Aninat. That’s because no matter which side wins, Chile’s path to a new Constitution is far from over.

In the case of an “approve” victory, there will be a long process of implementation, said Funk, that will involve Congress passing laws over the next several months to actualize the articles. Congress will also likely reform the new Constitution in accordance with public feedback on the document. “Even the president recognizes that we need to fix some of the things that are wrong or less popular,” he explained.

A “reject” win doesn’t mean the existing Constitution won’t be replaced. “There’s a political consensus that we can’t just leave it there,” said Funk. “There will be a new process, but we don’t know what it will look like.” Indeed, both the leftist governing coalition and rightist opposition parties have released letters committing to moving forward with the process of rewriting the Constitution in the case of a “reject” vote.

That process of a rewrite in the case of “reject” is as of yet undefined. Velasco thinks a second convention is the likeliest outcome, as it aligns with the intention of the 2021 referendum in which voters said overwhelmingly that they wanted an elected assembly to write the new document.

However, Chile’s laws don’t explicitly define what that rewrite process must look like, leaving it up to the interpretation of elected officials. Aninat noted that Congress, the president, and the former members of the original Constitutional Convention would be key actors to watch and see how a potential second-draft Constitution comes to be.

What does all of this mean for Chile’s President, Gabriel Boric? An “approve” vote would buttress his agenda as many of his signature progressive issues feature in the draft Constitution. “If ‘approve’ has a clear [mandate with] the population, he will have a second impulse to implement the reforms and key promises from when he was a candidate,” said Matus.

Either way, the result of the referendum will change the dynamics of Boric’s presidency. A poor performance by approve will disempower far-left elements of his coalition whereas a strong approve win may embolden them. The effect of the plebiscite on Boric’s referendum should be evident in the cabinet reshuffle he is expected to undertake just after the vote.

“No matter what happens on Sunday, the uncertainty continues,” concluded Funk.