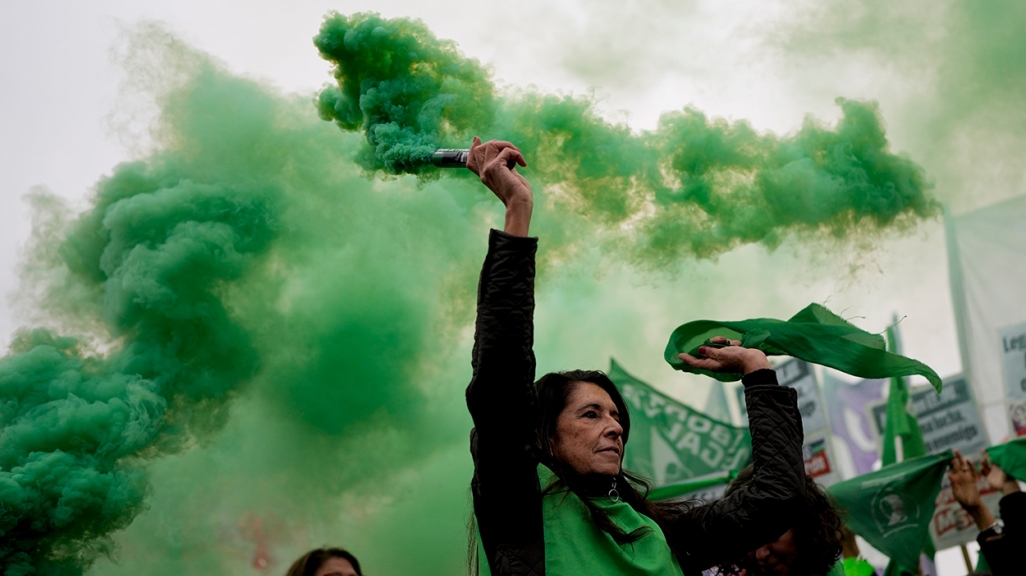 Until it was overturned on June 24, 2022, the U.S. Supreme Court decision in Roe v. Wade stood out, not just in the Americas, but in much of the world for establishing abortion as a constitutional right. For most of the nearly five decades Roe was in force, the majority of Latin American countries offered little in the way of abortion rights or access. Most provided limited access in cases of rape or risk to the mother’s life, but others, such as the Dominican Republic and El Salvador, have a complete ban on the procedure. And while there were places—such as Cuba (1965), Mexico City (2007), and Uruguay (2012)—that took steps toward legalization, up until 2020 some 97 percent of Latin American women lived in countries with severe abortion restrictions.

That changed in December of 2020 when Argentina legalized abortion. Since then, Mexico and Colombia decriminalized the procedure as well, meaning three of the four most populous countries in Latin America have now done so. Should its draft constitution win approval in September, Chile may soon follow suit.

These countries in Latin America follow a global trend that has seen more than 30 nations expand abortion access since 2000. Meanwhile, Nicaragua and the United States are two of the three countries worldwide that have rolled it back.

AS/COA Online explores the expansion of abortion rights in Latin America in the twenty-first century, as well as two examples of countries taking restrictive steps.

Much has changed since Uruguay’s government banned abortion outright in 1938. What was once a largely Catholic society is now half unaffiliated, atheist, or agnostic.

In 2008, President Tabaré Vázquez vetoed a Congress-approved bill that would have decriminalized abortion. But four years later, during the presidency of José “Pepe” Mujica, the landscape changed. On October 17, 2012, Uruguay became the second country in Latin America to legalize abortion, following a 17–14 vote in the Senate.

“With this law, we enter a group of developed countries that have mostly adopted criteria of liberalization, recognizing the failure of punitive norms that intend to prevent abortion,” said Senator Luis José Gallo during the session.

The law, which allows women to get elective abortions up to 12 weeks into pregnancy, drew criticism from both sides of the aisle. Anti-abortion politicians argued that the government should have encouraged adoption over abortion, while the pro-choice side took umbrage with a stipulation that requires women to justify abortion requests to a panel of three experts. Women must also go through a five-day period of reflection before completing the procedure.

In Uruguay, as in other Latin American countries, rights networks help women with self-managed abortions, providing information and emotional support.

Even if it wasn’t the first country in Latin America to legalize abortion, Argentina is viewed by many as the launchpad for the recent abortion rights movement sweeping across other parts of the region. Starting in 2005, Argentina’s National Campaign for the Right to Abortion adopted the use of a green bandana—representing health—in a move that harkened back to the use of white kerchiefs used by mothers of those disappeared during the country’s dirty war. A decade later, activists began to don the green scarf in #NiUnaMenos (“Not one woman less”) marches that protested violence against women and femicides. In 2018, hundreds of thousands of Argentines took to the streets in support of decriminalizing abortion, setting off the Marea Verde, or green wave. The green bandana has since been used in women’s rights protests across Latin America and other parts of the world, including in recent U.S. marches in defense of Roe v. Wade.

Despite the large-scale mobilizations, in August 2018, Argentina’s Senate voted down legislation that would have decriminalized abortion in the first 14 weeks of pregnancy. That left the country with its status quo legislation allowing abortion just in cases of rape and risks to a woman’s life.

But the national debate proved a stepping stone in Argentina’s expansion of abortion rights. Public opinion polls showed most Argentines supported decriminalization, and during the 2019 presidential race, candidates found themselves forced to take a stand. With newly elected President Alberto Fernández supporting legalization, the country’s legislature took up the matter again.

On December 30, 2020, a 38–29 Senate vote legalized abortion up until the fourteenth week of pregnancy. In addition, in a nod to activists’ argument that restrictions disproportionately harm poor women, the law guarantees that abortions can be accessed for free.

On September 7, 2021, Mexico’s Supreme Court ruled to decriminalize abortion and recognized the fundamental right to end a pregnancy. The head of the court, Arturo Zaldívar, emphasized that bans on abortion particularly harmed disadvantaged people, describing the decision as “a watershed in the history of the rights of all women, especially the most vulnerable.”

The ruling struck down parts of a Coahuila state law that punished women with up to three years in prison for having an abortion. It also allowed for women imprisoned for abortion to seek freedom. A separate decision made at the same time invalidated Sinaloa state legislation that backed the right to life from the point of conception.

In and of itself, the news of the decriminalization decision was notable, given that it occurred in Latin America’s second-largest and a majority Catholic country. But it drew additional attention given that less than a week before the ruling, the U.S. Supreme Court refused to block a highly restrictive abortion law in Texas, which borders Coahuila. The back-to-back decisions in neighboring countries sparked word that women in the United States could turn to the neighboring country—and Mexican activists—for support.

Even before the Mexican court’s ruling, four states had already taken the step of decriminalization, starting in 2007 with Mexico City. In 2019, Oaxaca followed suit, as did Hidalgo and Veracruz in 2021. The 2021 federal ruling then set a precedent for states to modify their state legislatures to allow for elective termination of pregnancy. Five states have since done so: Baja California and Colima in 2021; and Sinaloa, Guerrero, and Baja California Sur in 2022.

The Court’s 2021 ruling on Coahuila puts that state on the list, bringing the total number of states with abortion decriminalized to 10 of 32. In most, the gestational limit is 12 weeks, although it is 13 weeks in Sinaloa. In all other states, abortion is legal at least in the case of rape and, in most, in cases affecting a mother’s health.

EQUIS’ Ana Pecova explains why Mexico’s laws fall short when it comes to stemming violence against women and how to turn the tide.

On February 21, 2022, Colombia’s Constitutional Court decriminalized abortion for up to the first 24 weeks of pregnancy. The Court handed down the 5-4 decision in a case filed by Causa Justa, a movement made up of women’s rights activists and healthcare professionals that focused on how the lack of abortion rights more negatively affected poor and disadvantaged women.

With abortion outlawed in the country since the 1936 penal code was created, the battle for legalization was a long one. Various bills since the 1970s attempted to expand abortion rights in the country, but few passed. Over the years, as the church’s influence waned and governments searched for peace with left-wing insurgency groups, things began to change. Back in May 2006, Colombia’s Constitutional Court ruled that the country’s outright ban on abortion was a violation of women’s rights. Its decision stopped penalizing women and health care providers for performed abortions if a pregnancy posed a risk to a woman’s health, if there are fetal abnormalities, or in cases of rape or incest.

Should Chile’s new Magna Carta win approval in its September plebiscite, it would become the first country in the world to enshrine the right to terminate a pregnancy in its Constitution. Article 16 of the document calls for the state to provide the “services” needed to perform the “voluntary termination of pregnancy.”

The move would be a dramatic shift for a country that had a total abortion ban up until 2017. That year, on August 2, Chile’s Congress passed a law establishing three exceptions: if the life of the pregnant person is at risk, if the pregnancy is the result of a rape, or if there are fetal abnormalities. This bill changed a blanket ban that was in place since 1989.

Nicaragua: On November 18, 2006, President Enrique Bolaños signed a law that was passed by Congress that banned abortion under all circumstances in Nicaragua. For 130 years prior to the legislation, abortion was permitted under extraordinary circumstances in the country. The measure was promoted by the country’s powerful Catholic Church and passed in the unicameral Congress with 52 votes in favor, zero in opposition, and 38 in either abstention or absence. Jail sentences for abortion range between six and 30 years.

Honduras: On January 27, 2021, Honduras’ Congress approved a constitutional amendment that strengthened the language around the country’s abortion ban, increasing the number of votes needed to repeal it from two-thirds to three-quarters (from 85 to 96 members). Even before the measure, abortion was banned without exception in Honduras, where the use and sale of emergency contraception is also illegal.

The measure was taken during a presidential election year, and outgoing President Juan Orlando Hernández, now imprisoned in the United States and facing drug trafficking charges, dubbed it the “Shield against Abortion in Honduras.” Current leftist President Xiomara Castro campaigned in favor of restoring some reproductive freedoms but has yet to take any action.