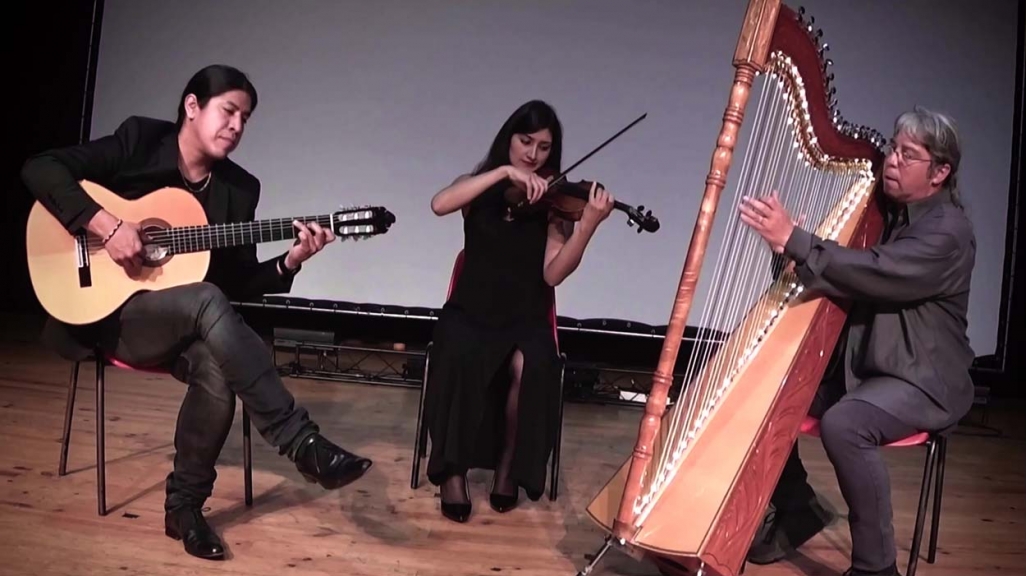 Willan Farinango was part of En Casa last summer alongside Mariela Condo, and was back on our virtual stage last November in a five-song set recorded at the Sala Demetrio Aguilera Malta in Quito. He was born in Ibarra, the capital of Imbabura, an Ecuadoran province with deep artistic roots into a musical family. Farinango made his first recording at the age of seven alongside his father's group, and studied guitar at the Escuela de Música del Teatro Gran Colombia in his hometown before moving to France, where he studied at the Conservatoire National de Musique de Cachan with Geneviève Chanut and at the École Normale de Musique Alfred Cortot in Paris with Alberto Ponce, Judicaël Perroy, Jérémy Jouve, and Álvaro Pierr. In addition, he studied composition, harmony, and jazz arrangements at the Conservatoire National de Musique Jean Wiéner, in Bobigny. Farinango's work is the result of a creative process in which popular music and academic, infused with avant-garde colors, create what can be understood as Ecuadoran popular chamber music. Farinango dedicates his time to production, teaching, and performance. Now based in Quito, previously he taught at the Conservatoire de Musique de Neuilly Plisance and has played on important stages in Latin America and Europe.

For this week, we asked Farinango to pick five groups for En Casa and he delivered an extraordinary selection of string music from Ecuador, Peru, Argentina, Paraguay, and Colombia.

Son of the great composer and bandoneonist Avelino Flores, Rudi Flores was born in Corrientes, in northeastern Argentina. After studying music at the conservatory in his hometown, he joined his father's group as a teenager. With his brother Nini on the bandoneon, he formed the Duo Rudi y Nini Flores in 1984, with which he recorded numerous albums. They quickly became known and recognized both in Argentina and settled in Buenos Aires in 1986, before leaving for Europe in 1991. The duo played a major role in the renewal of the chamamé, the typical music of their region recently included in UNESCO's list of Intangible Cultural Heritage. Flores has been playing tango since his youth. He has collaborated with the most distinguished Argentine musicians.

From Paris, where he lives, he sent us his trio version of Piazzolla's "Decarisimo" with guitarist Tomas Bordalejo and bassist Romain Lecuyer.

Palos y Cuerdas—comprising brothers Daniel, Lucas, and Diego Saboya—founded in 1994, is the leading Andean instrumental music group in Colombia. They have released several albums and received prizes from the country's Ministry of Culture on several occasions. The trio includes the typical instruments of Colombian popular music: tiple, bandola, and guitar. Their music incorporates classical, jazz, and traditional styles.

From Bogotá, they sent us their version of Gentil Montaña's "Sebastián."

Trío Simpay was established in 2018, with the objective of exploring Andean and Peruvian traditional and new music with guitar (Rolando Carrasco), clarinet (Armando Espinoza, and double bass (Felipe Mendoza).

From Lima, the trio send us their version of "Vilcanota," a piece by cusqueño composer Armando Guevara Ochoa, who was active at the time of the indigenist movements in the mid-twentieth century. The piece was originally composed for string quartet and incorporates traditional genres like huayno and pasacalles.

InConcerto is a classical music ensemble based in Quito. The ensemble is the musical body of Fundación InConcerto, a not-for-profit organization whose main goal is to develop new borders for classical music bringing it closer to people who do not have access to it and re-creating its meaning in our time and space. Ensemble InConcerto is directed by Ecuadorian violist Simón Gangotena and collaborates with local musicians as well as internationally renowned artists such as David Ballesteros, Nicolás Giordano and Lina Andonouvska.

From Quito they sent us "Yumbo," by Gerardo Guevara (b. Quito, 1930), one of the most important composers in Ecuador. His work combines native music with academic and contemporary techniques. Guevara studied with Nadia Boulanger in Paris who helped him develop his musical voice and explore the sounds of Ecuadoran traditional music in new contexts. "Yumbo" is a piece for string quintet based on the pre-Hispanic musical genre and dance with the same name still relevant in indigenous communities of Ecuador. This piece is an example of Guevara's creative world, where he reimagines traditional music in a classical setting.

The Ysando Trio features harpist Ismael Ledesma, violinist Andrea González, and guitarist Orlando Rojas Gimenez is a Paraguayan group based in France and founded in 2014. They focus on music from Paraguay, including their own compositions and have released two albums: Alma Latina and Baile de las cuerdas.

From Noia, in northern Spain, they sent us their version of Demetrio Ortiz's classic 1948 hit "Recuerdos de Ypacaraí."