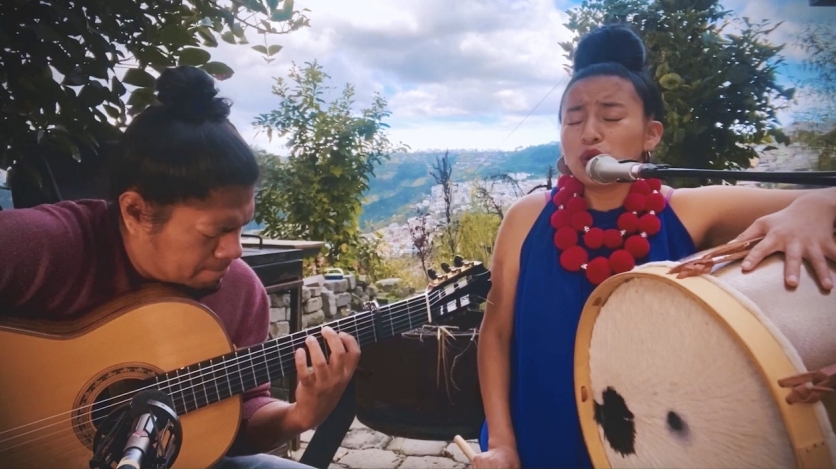 Our virtual series continues with this week dedicated to talented musicians of Ecuador.

Our Recuerdos series takes a brief hiatus as we dedicate this week and focus our En Casa series on talented musicians from Ecuador.

This week is dedicated to musicians from Ecuador, curated by Fabiola Pazmiño, who is not only Production Coordinator at the Fundación Teatro Nacional Sucre de Quito, where she has worked on everything from opera to international jazz tours, but also a poet. She selected five groups from the wealth of talent that exists in her country to create a varied and multilingual week of En casa videos.

From their home in Quito, Mariela Condo (voice and drum) and Willan Farinango (guitar) sent us their new version of "Llaki Shunku" (Sad Heart).

Pies en la Tierra (Cayo Iturralde, Ramiro Olaciregui, Raimon Rovira, and Carlos Alban) have been a driving force in their country's jazz scene since 2003. They sent us a new version of "La bestia," recorded at the bassist's home in Quito.

Alex Alvear, is one of the most representative Ecuadorian musicians of his generation, mixing, with grace, local music and jazz. From home in Quito and joined by his son Matías, and Ana Cachimuel, they sent us a new version of the very popular, bilingual song "Semillita" (Little Seed).

Raúl Molina, Mauricio Samaniego, and Fernando Procel, independently active in the Ecuadorian indie music scene, assembled into a power trio and sent us a sophisticated version of "Paréntesis" from home in Quito.

Grecia combines the traditional music form her native Ecuador with Latin American folk music and contemporary influences. She is joined by Félix Atahualpa in her own "Maru," a song she composed for her mother.