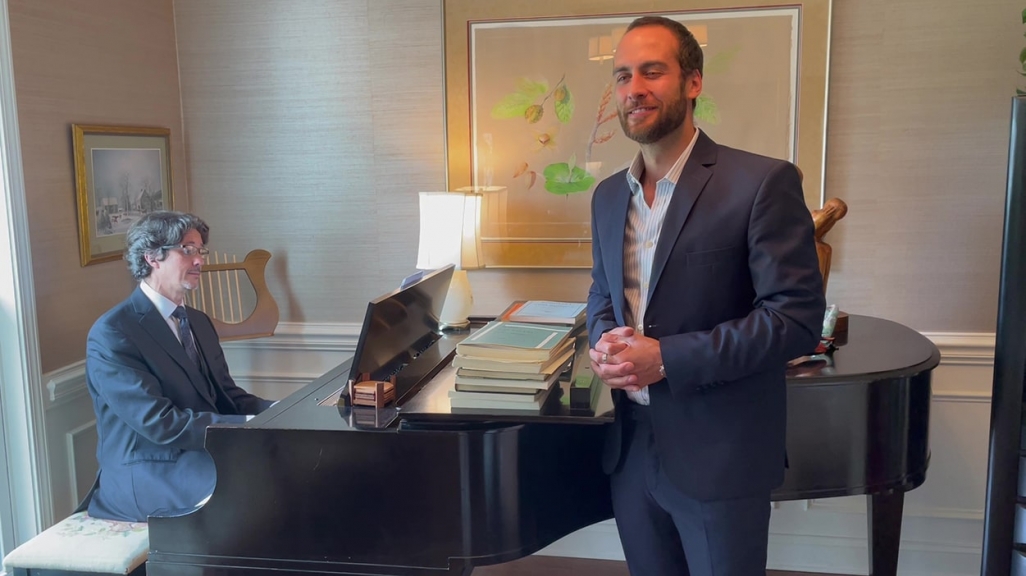 En Casa is back with a week of music selected and performed by Argentine pianist and conductor Jorge Parodi.

This week's En Casa videos were selected by pianist Jorge Parodi, general and artistic director of Ópera Hispánica. Parodi invited Colombian soprano (and composer) Patricia Caicedo and Argentine baritone Mariano Gladic to perform five songs from a Argentina, Brazil, and Colombia. Caicedo recorded her parts from home in Barcelona, while Gladic and Parodi were able to record together in person last week in Savannah.

Parodi has worked extensively in North America, Latin America, Europe, and Asia. Recent credits include Opera Tampa, The Atlanta Opera, New York City Opera, Chautauqua Opera, Opera Grand Rapids, Castleton Festival, Buenos Aires Lírica (Argentina), The Banff Centre (Canada), and The Juilliard School. Reviewed as having “the most expressive conducting hands since Stokowski” by the New York Daily News, Parodi has worked with such companies as the Teatro Colón in Argentina, the Volgograd Opera in Russia, and has collaborated with artists including Isabel Leonard, Eglise Gutierrez, Tito Capobianco, and Sherrill Milnes. Parodi is the music director of opera in Williamsburg, Virginia, the Tokyo International Vocal Arts Academy, and the International Summer Opera Festival of Morelia in Mexico, and he is the music director of the Senior Opera Theatre at the Manhattan School of Music, where he has led its productions to critical acclaim. A featured interview about his work with MSM Opera recently appeared in Opera News.

Recuerdos will be back next month.

Argentine baritone Mariano Gladić was born in the seaside town of Mar del Plata, and started his musical studies at the Conservatorio Luis Gianneo before joining the Instituto Superior de Arte del Teatro Colón in Buenos Aires. In 2015 he made his debut with Juventus Lyrica, a Buenos Aires company of young artists and at the Teatro Argentino de La Plata and the Teatro Colón in 2017. He has sung roles in Wagner's Das Liebesverbot conducted by Oliver von Dohnányi, Händel's Giulio Cesare, and Dvořák's Rusalka, under Julian Kuerti. He also participated in a children's version of Rossini's La Cenerentola. He also sang Le grand macabre by György Ligeti and Leonard Bernstein's Candide. In 2020 and 2021 he participated in the Savannah Voice Festival, under the mentorship of the legendary opera star Sherrill Milnes. Once in Buenos Aires and before entering the ISATC, he studied acting with Héctor Bidonde, Rubén Szuchmacher, and Helena Tritek, as well as clown techniques with Claudio Martinez Bel. He worked as an actor for several years, performing in plays by Patrica Zangaro, Alberto Wainer, and Mariano Cossa, as well as classics by Shakespeare and Gogol.

Gladić was on our stage in 2019 as a winner of the Alejandro Cordero Competition and this week we will see him in two Argentine songs filmed alongside Parodi at the home of American opera legend Sherrill Milnes, by generous permission of the Savannah Voice Festival and the Voicexperience Foundation. Today we share "Canción al árbol del olvido" by Alberto Ginastera.

Recognized as ambassador of Iberian and Latin American art song, Colombian the soprano and musicologist Patricia Caicedo is one of the leading interpreters and researchers of this repertoire. She has performed this repertoire around the world and is the founder of the Barcelona Festival of Song, a ten-day summer festival that focuses on the performance and study of Latin American and Iberian art song. Caicedo has recorded ten CDs dedicated to the art song repertoire in Spanish, Catalan, Portuguese, and Indigenous languages. Most of her recordings include works recorded for the first time or world premiere recordings, and two of these are dedicated to music by women composers. In 2020 she returned to composition and reconnected with folk music.

Her interdisciplinary research seeks to contextualize the works and composers, studying them as a part of complex social networks, and she has published ten books considered a reference in the area, including editions of scores and monographs. The Latin American Art Song: Sounds of the Imagined Nations was published by Lexington Press in 2019. Caicedo is a sought-after guest artist and teacher at universities and conservatories worldwide, including New York University, Columbia University, the University of Texas at Austin, University of California Riverside, University of South Florida, Brigham Young University, New Mexico State University, Saint Olaf College, and the Smithsonian Institution, among many others.

Caicedo says: "My life’s mission is to bring light and contribute to positioning Latin American and Iberian art song, its composers, and poets in the place of admiration and validation they deserve. I want to contribute to decolonizing the curriculum of classical singers to bring diversity to the vocal repertoire."

Her interest in exploring the possibilities of technology brought her to create Mundo Arts, a company that includes a music publishing house, a record label, and an online store, and is the creator of EYECatalunya, an interdisciplinary platform dedicated to promoting Catalan creators internationally. In 2017 Caicedo was named an Honorary Member of the Brazilian Voice Teachers Association and their Europe representative. She has served as a cultural ambassador for the Governments of Colombia and Spain. Patricia holds a PhD in musicology from the Universidad Complutense de Madrid and an MD degree from the Escuela Colombiana de Medicina, and is on the Executive Board of the International Music Council, a UNESCO partner organization.

For her first appearance this week, we share one of Caicedo's own compositions, "Para vivir."

Patricia Caicedo sings "Saudade," by Brazilian composer Elza Camêu's. Camêu (1903-1995) was born in Rio and studied piano before exploring composition. She also taught in Belo Horizonte and Rio, and was a radio producer and commentator on Rádio MEC, Brazil's first station. In 1962, she joined the Anthropology Division at the Museu Nacional, where she studied Native musical instruments in the collection. She published Introdução ao Estudo da Música Indígena Brasileira in 1977, which includes the results of her studies of Indigenous music and instruments. She wrote around 90 pieces for voice and piano, voice and orchestra, piano solo, chamber music, one cantata and symphonic works.

Gladić is back with Piazzolla's "Los pájaros perdidos."