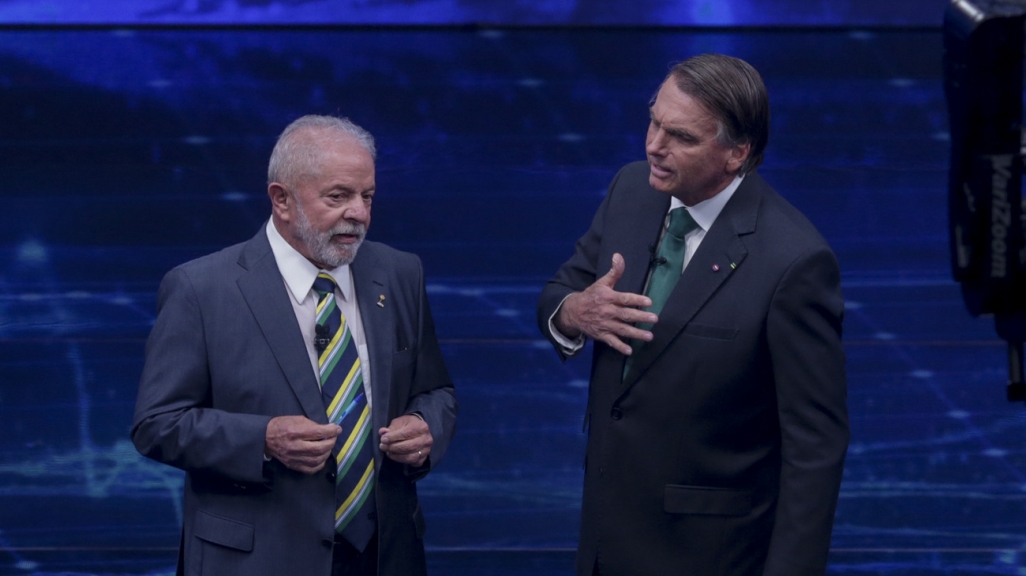 Lula da Silva (L) and Jair Bolsonaro face off at a debate. (AP)

1. The judiciary is seeking to curb misinformation 2. The two candidates are employing different strategies to reach undecideds 3. It might come down to a few states 4. Regardless of the results, Congress will continue to grow its power 5. A challenge to the results could still occur

Five Things to Watch ahead of Brazil’s 2022 Presidential Runoff

Jair Bolsonaro and Luiz Inácio Lula da Silva face off in the October 30 second round. Learn about campaign strategies, misinformation, and Minas Gerais.

October in Brazil has been bookended by two high stakes political contests. At the start of the month, Brazilians voted in an October 2 first-round election that saw former President Luiz Inácio Lula da Silva (2003-2010) and current President Jair Bolsonaro secure their spots in the runoff.

Lula captured 48.4 percent of the vote compared to Bolsonaro’s 43.2 percent, amounting to a difference of 6 million votes between the candidates. While Lula came just short of getting the 50 percent of the vote needed to win outright in the first round, Bolsonaro exceeded expectations and his allies performed well across legislative and gubernatorial races.

Now, on October 30, Brazilians will return to the polls to select between the two presidential heavyweights, who each present starkly different visions for the future of Latin America’s largest democracy. Like the first round, the runoff has seen highly polarized and negative campaigns on both sides

Ahead of the runoff, AS/COA reviews five factors shaping the race.

1. The judiciary is seeking to curb misinformation

Misinformation has plagued Brazil in past election cycles and the problem persists, with fake stories flooding social media channels like Whatsapp. The Supreme Court estimates that misinformation has increased 17-fold in this election compared to previous ones.

On October 20, the Superior Electoral Court gave itself the power to ban information it deems fake or harmful to the electoral process. Once Alexandre de Moraes, the head of the Superior Electoral Court and a Supreme Court justice, has determined a post to be misinformation, social media companies must remove the content within two hours. If they don’t comply, media companies can be suspended.

This has raised civil liberty concerns about de Moraes’ ability to infringe on rights around political expression and freedom of speech. He has already put the powers to use. On October 24, he forced Federal Deputy André Janones, a prominent Lula supporter, to remove content that linked Bolsonaro to former Congressman Roberto Jefferson, who, on October 23, fired guns and threw a grenade at federal police. On the other hand, on October 26, de Moraes opted not to remove radio content that Bolsonaro decried as false.

Bolsonaro and his culturally conservative, anti-globalist allies will be a force for many years to come, writes AS/COA's Brian Winter in Foreign Affairs.

2. The two candidates are employing different strategies to reach undecideds

In the case of the first group, Lula appears to have an advantage. Third-place finisher Simone Tebet and fourth-place finisher Ciro Gomes, both moderates, back Lula. Of the two, Tebet is more actively campaigning for Lula, working to make the candidate and his Workers Party more appealing to moderates through measures such as abandoning their signature red color for a more neutral white.

When it comes to abstention, Lula’s campaign brought together a collection of musical artists to record a song about the importance of voting in the second round. A recent initiative to provide free public transportation on the day of the election may help get lower income voters, who leans toward Lula, to the polls.

Bolsonaro, for his part, is trying to mobilize poor voters with social spending. UOL news estimates the federal government has increased social spending by $4 billion since August. Though electoral law bans social spending increases during campaign season, Congress lifted a constitutional budget cap and passed an emergency exemption to the law to allow increases in cash transfers and establish gas subsidies in August. Bolsonaro continued to execute heavy social spending in the weeks leading up to the election.

In the first round, 21 of Brazil’s 27 states and federal districts saw a double-digit margin between the two candidates. As such, attention is honing in on a few pivotal, highly populated states, where the results were between the candidates were close. That includes São Paulo, where third way candidates like Tebet and Gomes took close to 10 percent of the vote. Another is Minas Gerais, known as the Brazilian bellwether, which has been won by every successful presidential candidate in Brazilian history. Both campaigns have been spending heavily on the state and the candidates have crisscrossed it with rallies. Lula won Minas Gerais in the first round by 5 points and polls suggest he is holding his lead there.

LatAm in Focus: The Battle for Brazil's Divided Electorate

Quaest’s Felipe Nunes covers the first round and what's ahead in an October 30 runoff for presidential rivals Luiz Inácio Lula da Silva and Jair Bolsonaro.

4. Regardless of the results, Congress will continue to grow its power

Over the past decades, Brazil’s Congress has increased its power in comparison to the executive and that trend has only continued with the introduction of the secret budget. This discretionary allocation of money helped incumbent legislators win reelection as they benefited from their ability to execute pork barrel projects in their districts.

Those incumbents will be joined by a new crop of far-right legislators, who won on October 2. Congress as a whole will serve as a check on either candidate’s agenda and ability to steer the budget as neither candidate has the number of allied legislators needed to constitute a majority.

Brazil’s markets reacted positively to the new congressional makeup, with the Brazilian stock market surging to its highest single-day gain since April 2020 and the Brazilian real rallying 4 percent.

Already, parties that performed strongly in the first round, such as the right-wing União, are exploring entering into a governing coalition helmed by Arthur Lira, president of the Chamber of Deputies. He was integral to establishing the secret budget and, if his coalition grows, so will his powers—and likely those of Congress.

5. A challenge to the results could still occur

Leading up to the first round, Bolsonaro spent months casting doubt about Brazil’s electoral system despite a lack of documented evidence of fraud or vulnerabilities. Fears existed that, in the case of a first-round defeat, Bolsonaro would question the validity of the results and would try to involve the military in rectifying what he framed as a stolen election.

That didn’t happen after his stronger-than-projected performance. However, his threat to not accept the results of a runoff in the case of a defeat remains pertinent. Recently, analysts are suggesting that his frustration with the regulation of misinformation by the courts may factor into the content of his challenge. Bolsonaro has been calling emergency meetings of his cabinet officials just days before the election, stirring concern.