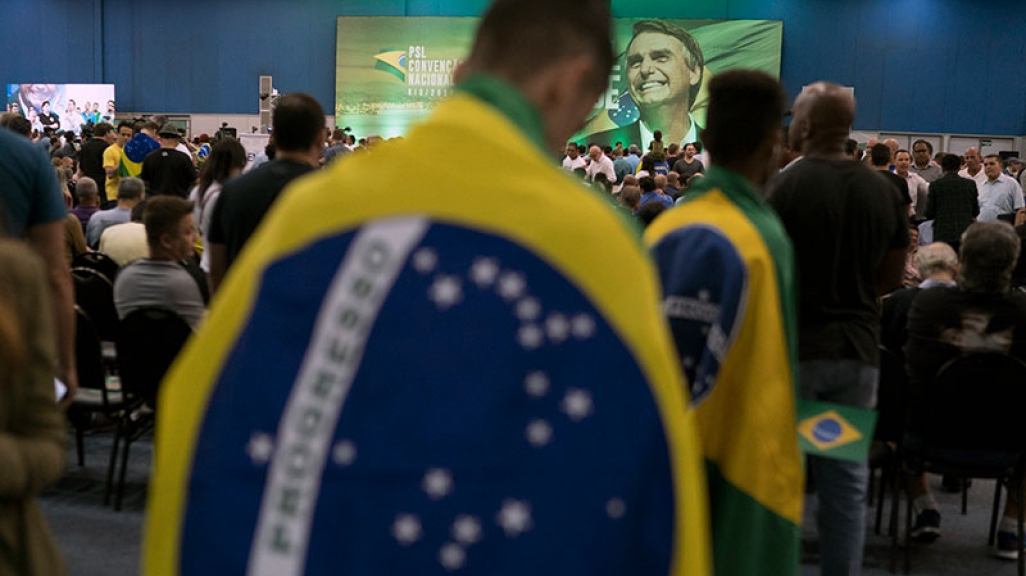 Supporters of Bolsonaro at a rally. (AP)

Ahead of the October 28 runoff, we look at the presidential candidates’ positions on issues ranging from Venezuela to trade.

Foreign policy isn’t a top concern for Brazilian voters, but that’s not stopping the frontrunner from capitalizing on certain international issues like immigration and Chinese influence through a domestic lens. If it sounds familiar, it’s because it is. In fact, Congressman Jair Bolsonaro of the far-right Social Liberal Party (PSL) has been dubbed the “Trump of the tropics.” Meanwhile, Bolsonaro’s opponent in the October 28 runoff, former São Paulo Mayor Fernando Haddad, has defaulted to foreign policies of his Workers’ Party (PT) predecessors. We take a look at where each stands on relations with the United States, Venezuela, and China, as well as how they view trade.

A Bolsonaro presidency could prompt a new, more friendly era for U.S.-Brazil relations, currently a low-priority relationship former U.S. Ambassador to Brazil Anthony Harrington called “a black hole of U.S. diplomacy” during a Council of the Americas panel in July. Bolsonaro has expressed hope in getting closer to Washington, stating it’ll be his second trip as president after a first stop in Israel. Of note: The former army captain already vowed to move Brazil’s Israeli embassy from Tel Aviv to Jerusalem in a move that echoes the White House opening its new Jerusalem embassy in May.

In other signs of the potential for the two countries to come closer should the frontrunner win, Bolsonaro’s eldest son, Congressman Eduardo Bolsonaro, established ties with the Trump sphere of family and friends. In January, Eduardo met Donald Trump Jr. at a firearms fair in Las Vegas, and then met with former Trump adviser Steve Bannon in August. The PSL candidate selected Ernesto Fraga Araújo as his top pick for foreign affairs minister. Fraga Araújo, who currently heads U.S. and Canada relations in Brazil’s Foreign Ministry, praised Trump for saving Christianity from Islamic radicalism and the “globalist, Marxist culture” in a 35-page essay titled “Trump and the West.”

Haddad, in contrast, is taking a more critical tone of Trump administration policies. In an interview with Exame, the PT candidate with an educational background in economics and philosophy warned about the effects of the U.S.-China trade war on emerging economies like that of Brazil, warning that the conflict could eventually deflate world trade. “No one is safe from ‘America First,’” he said.

Haddad has also been adamant that the United States should not get involved in the region’s affairs, claiming that South American countries should be the ones to deal with the crisis in neighboring Venezuela.

Bolsonaro, for one, is making use of the Venezuelan political and economic crisis to score points at home, warning that a PT government would turn the country into a Brazilian version of the socialist-ruled country. He conjured the image in his first-round victory speech, laying out the choice of Brazilian voters as one between freedom (a vote for him) or “the path of Venezuela” (a vote for Haddad). The message is getting a fake news boost, with false images of PT tweets congratulating Nicolás Maduro making the rounds on WhatsApp. Meanwhile, the PT—which at times saw warm relations with Venezuela’s Hugo Chávez during the Lula administration—has been unable to stave off the comparisons. Haddad avoids directly criticizing the Venezuelan president and refers to the country’s crises as a “dramatic” situation and “compromised democracy.” While the PT candidate proposes engaging in dialogue—and not military intervention—as the principal way out of Venezuela’s problems, Bolsonaro vows to cut ties with Caracas.

The influx in Venezuelan migrants has some portion of Brazilians favoring Bolsonaro. The country has received 56,000 Venezuelans since 2014, with as many 900 migrants crossing the border a day as of this August. Both of the Brazilian states bordering Venezuela—Roraima and Amazonas—backed Bolsonaro in the first round. Roraima is also poised to elect a PSL governor in the runoff. Bolsonaro frames the migration wave as a national security issue and says he will change the country’s current border policy. When he visited the northwest region in March, he called for the UN to create and manage refugee camps for the Venezuelans.

Haddad’s answer to the influx is to resettle the migrants throughout the country in order to avoid their concentration in poor regions. Overall, he supports Brazil’s historical acceptance of refugees, saying, “We must be proud of this generous and supportive behavior, and, despite current difficulties, make an effort to continue to welcome refugees and immigrants—of any nationality.”

China and the BRICS

As Brazil’s largest trade partner for a decade, Beijing has invested more than $54 billion in the country since 2003 and announced plans in April for an additional $71 billion in coming years.

Bolsonaro acknowledges Brazil’s interest in attracting Chinese business but has also voiced concern about Beijing’s growing stakes in the country’s energy sector. In an interview after the first-round vote, Bolsonaro said, “China isn’t buying in Brazil. China is buying Brazil.” He warned that privatizing the Brazilian utilities company Eletrobras would give China an opening to own more of Brazil’s energy sector. As such, Bolsonaro has backed off from privatization promises, though his popular economic adviser Paulo Guedes continues to favor the move. Bolsonaro also said he would review Brazil’s participation in the BRICS, a political and economic platform for the large emerging markets of Brazil, Russia, India, China, and South Africa.

On the other hand, Haddad firmly supports the bloc as presenting an opportunity to right the country’s sluggish economic recovery. “Brazil is timid, closed in foreign policy,” he said on October 3. “The first thing we have to consider is the BRICS countries, which are very important markets for Brazil, and we need to strengthen bilateral and multilateral agreements with those partners in order to create jobs.”

Haddad has made few direct statements about Brazil-China ties, instead focusing on regional integration as his “absolute priority” when it comes to foreign policy. The PT candidate emphasizes “radically” strengthening ties within the Southern Common Market (Mercosur), whose members consist of Argentina, Brazil, Paraguay, Uruguay, and, until recently, Venezuela. (Bolivia’s membership is pending Brazilian approval.) The four countries have a combined GDP of $2.9 trillion, of which Brazil contributes more than two-thirds. Haddad sees the bloc as a way to help Brazil and Argentina out of their economic woes through more trade and integration. In regard to the Mercosur-EU trade negotiations, now underway for more than a decade, he’s qualified his support for an eventual free trade agreement by calling for transparent discussions going forward and a balanced final deal.

Bolsonaro for his part, is considering a rewrite of Mercosur, according his adviser, PSL congressman Luiz Philippe de Orléans e Bragança. Given Bolsonaro’s preference for bilateral rather than regional trade agreements, a new Mercosur could potentially allow members to negotiate individual trade agreements outside the bloc—a move that is currently prohibited. Overall, Bolsonaro favors reducing import tariffs and nontariff barriers, with a particular interest in opening up to developed countries.