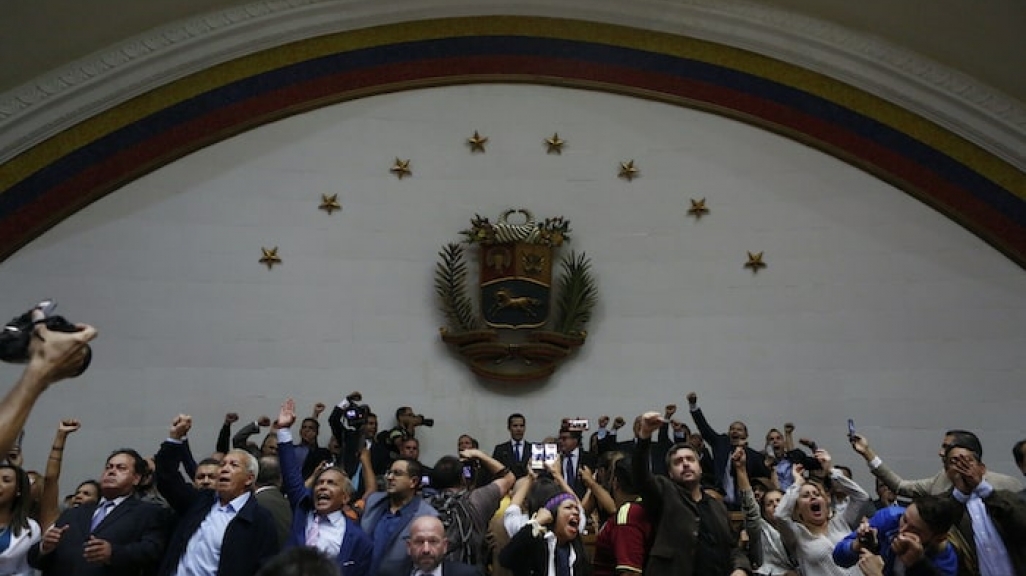 The Pressure on Venezuela's National Assembly

Here are three ways the Maduro government has moved to undercut the opposition-controlled legislature.

There are a lot of turning points in Venezuela’s descent into crisis. But one date looms over ongoing struggles between Nicolás Maduro and the opposition: December 6, 2015. That was the day of the last legislative elections, arguably the last time Venezuela held a mostly democratic vote. In those elections, the opposition—represented by a coalition known as the Democratic Unity Roundtable (or MUD)—won a two-thirds supermajority. That supermajority should have given them the power to, among other things, replace justices on the Supreme Court and officials on the National Electoral Council (CNE). But it didn’t happen.

In September 2019, Maduro openly talked about moving to “recover” the National Assembly. That month, Maduro also said elections would be held “soon” and that “there will be surprises.” As the National Assembly is the one of Venezuela’s five branches of power that Maduro does not control, it’s the only thing standing in Maduro’s way of complete control of the country. An opposition-controlled legislature also inhibits his ability to secure more foreign investment for the country’s collapsing oil production from China and Russia, given that the Assembly is the body that can approve oil-licensing agreements. Foreign companies are lobbying the Maduro government to let them extract other energy and mining resources but want legal clarity and security before doing so.

Since the last legislative election, Maduro and his chavistas have worked to undercut that opposition win and the legislature. Here are three ways they’ve done so.

The Maduro-aligned Supreme Court usurped the National Assembly’s powers over two years ago and handed them to a pro-government Constituent Assembly, which was ostensibly put in place to rewrite Venezuela’s Constitution but functions as a parallel, chavista-controlled legislature. The Lima Group, a multilateral body that has pressured for the restoration of democracy in Venezuela, first formed in the wake of the Constituent Assembly’s installation.

Almost a year before the Constituent Assembly was in place, the Supreme Court took away budgetary oversight from the National Assembly and declared all the legislation it passed to be null and void on the basis that it holds the body in contempt. At least 30 deputies have had their legislative immunity stripped, meaning they could be arrested at any time.

That brings us to January 5. While the events of the day were chaotic, they were not necessarily unforeseen as that is the date for electing congressional leadership each year. Juan Guaidó’s role as interim president is constitutionally based on his role as head of the National Assembly, where quorum in the 167-seat body is a simple majority of 84. Maduro-aligned representatives physically barred the opposition’s candidates from the building. They claimed quorum and elected Luis Parra as assembly president, despite the fact that the chavista faction has fewer than 60 members, though people apparently filled in as deputies to give the appearance of quorum in the room. While no country that currently recognizes Guaidó as interim president stopped doing so in the wake of the incident, the episode nonetheless served to muddy already cloudy waters.

The Venezuelan NGO Cepaz outlines 12 tactics used by the Maduro administration to undermine the opposition, running the gamut from cancelling passports to harassing family members to filing criminal charges in violation of due process.

Lima Group members have made it clear to Maduro and his team that the safety and security of Guaidó “must be guaranteed” and crossing it could trigger an international response. With the most visible figure off limits, the Maduro government arrested Guaidó’s chief of staff Roberto Marrero (who’s still behind bars 10 months later), fellow members of Guaidó’s party Popular Will, and other political allies.

A May 2019 report documented that all 108 opposition legislators have experienced persecution since taking office. Almost three dozen are physically unable to take their seats due to being in exile, in refuge at an embassy, or in state custody. The two in detention are Juan Requesens, a popular figure arrested by Venezuela’s intelligence police in August 2018, and Gilber Caro, a close advisor to Guaidó who was detained—along with journalist Victor Ugas—for a third time in December.

To maintain quorum and voting numbers, the Assembly passed a measure in December that allows deputies who cannot attend sessions in person to vote virtually.

Though there’s no constitutionally mandated date for elections, the next legislative ones wouldn’t usually take place until the second half of 2020, with the swearing in of the new session in January 2021. The earliest legislative elections have taken place in the chavista era was in late July in 2000. In the fall of 2019, Constituent Assembly head Diosdado Cabello said the 2020 vote could be held as early as January 5, and while that date passed, the probability the Maduro administration will move to hold them in the first part of the year remains high.

Apart from the date, there’s limited hope for a free and fair vote. In the past four years, the government has taken measures such as moving voting centers in opposition-heavy districts and harassing candidates’ family members. Washington recently shifted its tone to focus on advocating for specific conditions for fair elections, including voting for new governors to the five-member CNE board. In the process, an old debate is already resurfacing on whether the opposition should participate in a vote that is neither free nor fair, or boycott elections and allow the Maduro administration to claim hold on the National Assembly once and for all. Maduro’s strategy is simpler: gain control of the Congress and use the Constitution only inasmuch as it serves to achieve that aim.