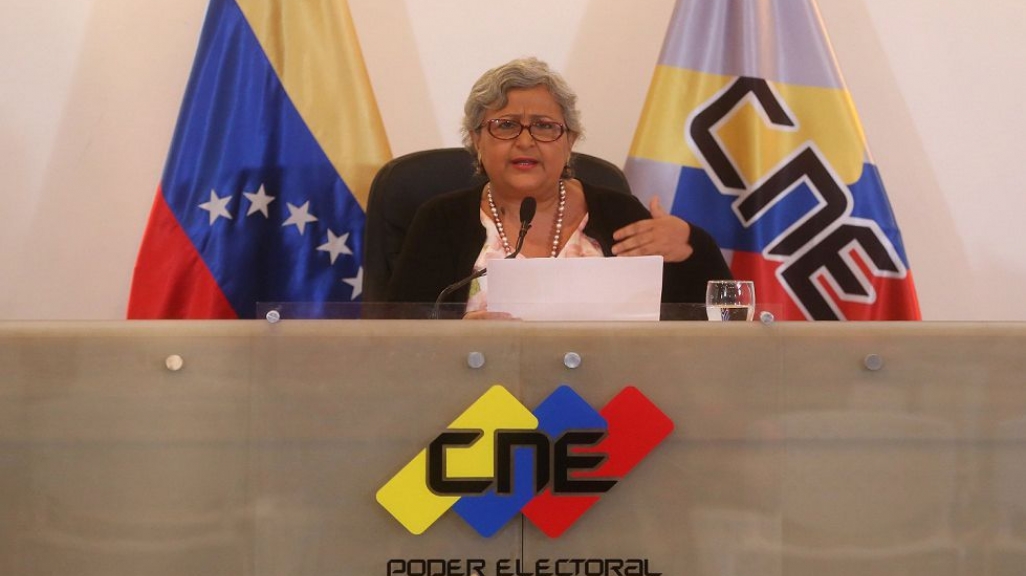 The Maduro administration worked hard to suppress opposition turnout in gubernatorial races on October 15 before claiming victory in 17 of 23 states, in defiance of polls.

Update, October 16: Tibisay Lucena announced on Sunday evening that, in defiance of polls and with 61 percent national voter turnout, PSUV candidates won 17 of the 23 governorships, and that MUD lost the three governorships it currently holds.

Venezuela is holding long-delayed gubernatorial elections at last on October 15, albeit warily. Projections show that the opposition is poised to win a landslide of the governorships, but the playing field has been considerably—and deliberately—distorted and few trust the government to handle the vote honestly, especially after its last vote in July was widely labeled fraudulent.

Voters will elect the governors of all 23 states in Venezuela, of which the United Socialist Party of Venezuela (Partido Socialista Unido de Venezuela, PSUV) currently holds 20. Just three are held by the opposition leaders from the Democratic Unity Roundtable (Mesa de la Unidad Democrática de Venezuela, MUD): Lara Governor Henri Falcón, a former chavista who left the PSUV in 2010; Miranda Governor Henrique Capriles, the MUD’s candidate in the last two presidential elections; and Governor Liborio Guarulla in the rural Amazonas state. One of the PSUV governors defending his seat is Argenis Chávez, the younger brother of the late president, Hugo, in his family’s home state of Barinas. Governors are elected to four-year terms in Venezuela, and there are no term limits. The last elections took place in December 2012.

Under the 1999 Constitution, governors in Venezuela have less autonomy than in a federalized system. Instead, they’re seen as extensions of the centralized government and must work in concert with local legislative councils whose members are appointed by the executive. That said, the governors are important public figures, and if the opposition were to take over a majority of seats, it would be the most important electoral victory since the December 2015 legislative elections. The opposition boycotted the only other national vote to take place since then, one in July to elect representatives to the Constituent Assembly.

Venezuelans have one of the highest turnout rates in the Americas, especially considering it’s a country where voting is not mandatory. The turnout rate for 2012 gubernatorial races was 54 percent. More than 19 million Venezuelans are registered to vote this time around. In a pair of dueling votes in July, opposition organizers tallied more than 7 million voters in an unofficial referendum against the Maduro administration, while the government claimed 8 million ballots were cast in a vote it held two weeks later.

With a 76 percent disapproval rating, President Nicolás Maduro and his allies aren’t leaving the vote up to the public—or chance. Here are just some of the ways his administration, party members, and diehard chavistas are making the playing field a little less even.

1. Break up with Smartmatic after a decade of partnership.

Though the London-based firm built its brand providing the triple-check technology for Venezuelan elections going back to 2004, Smartmatic and the Maduro regime had a falling out in August. Days after the government’s July vote to elect representatives to the Constituent Assembly, the company issued a statement saying that the results released by Venezuela’s National Electoral Council (Consejo Nacional Electoral, CNE) were inflated by “at least” one million votes in the government’s favor. (Other analysts put the figure closer to 4 million.) Maduro said the company was pressured by the United States to make the statement. CNE head Tibisay Lucena said Smartmatic’s statement was part of a “permanent aggression” against the country that also involve individual U.S. sanctions against her issued days before the vote.

Argentine firm Ex-Clé, known best for providing biometric ID products than voting services, will provide the voting technology for the October 15 vote. As of early September, however, Ex-Clé was not authorized to conduct business with the Venezuelan state because the firm failed to make an annual update to its information in a national registry of contractors.

Analysts say that, given the current state of unrest in the country, the MUD could pick up as many as 16 seats, bringing their total to 19 governorships. But, as in many elections, it’s easier to hold on to a seat than it is to take one, and any depressed turnout favors the incumbent chavistas. According to the Venezuelan political site Prodavinci’s simulation, MUD winning 19 is based on a 67.3 percent national turnout rate. The site also calculates that, for every 5 percentage points that MUD voter turnout is below the national average, the coalition will win one fewer seat (so if MUD turnout is 62 percent, they’d win 18 seats, 47 percent would give them 15 seats, etc.)

What is the government’s plan? Five days before Sunday’s vote, a CNE official said via Twitter that the agency was moving 205 voting centers in 16 states, supposedly due to lack of election materials and for unspecific security reasons. The move affects an estimated 312,000 voters. In the 2015 legislative elections, MUD candidates won a total of 245,000 votes cast at those centers, compared to the 65,000 votes that went to PSUV candidates, per Venezuelan electoral expert Eugenio Martínez. The bulk of the relocated centers are in just four states, including Lara and Miranda, two of the three governorships held by the MUD at the moment, as well as Aragua, Mérida, and Táchira. Numerous voters reported trouble locating their new assigned voting center; some couldn’t find the addresses on Google Maps.

But getting to the ballot box is just one challenge for opposition voters. The other will be selecting the right candidate. Though close to two dozen parties belong to the MUD, the CNE allowed only one candidate from the coalition to run in the general election in each race. That said, the agency is not updating the ballots from the primary election, so all the primary candidate names will be there, and should a voter elect any of the candidates who didn’t make it to the general election, the vote will not be counted.

In late September, Venezuela’s secret intelligence police, the SEBIN, detained the brother of opposition Congressman José Manuel Olivares, who leads polls to win the governorship of Vargas, a tiny state near Caracas that was once a chavista stronghold.

Meanwhile, the government controlled-Constituent Assembly is debating whether or not to disqualify Juan Pablo Guanipa, the MUD congressman who’s running for the governorship of Zulia—the country’s most populous state—from public office on charges of disrupting public order. The MUD congressman previously called for Smartmatic to release the data it had that showed fraud in the July 30 vote results.

Vice President Tareck El Aissami announced that the assembly will investigate the MUD candidate for governor in the state of Nueva Esparta, Alfredo Díaz, on charges of terrorism, for allegedly participating locally in nationwide anti-government protests.

While Falcón is on the ballot for reelection, the CNE has banned both Capriles and Guarulla, as well as several other officials, from running in these or any elections on a variety of thin charges. Additionally, the number of political prisoners in Venezuela has quadrupled in 2017, from just under 100 at the beginning of the year to more than 419 nationally, according to local NGO Foro Penal. In the rural Amazonas state, Governor Guarulla charged the PSUV candidate with asking the state to cut electricity to the area, where voters will be going to the polls amid shortages of gas, internet access, food, telephone service, transport, and more.