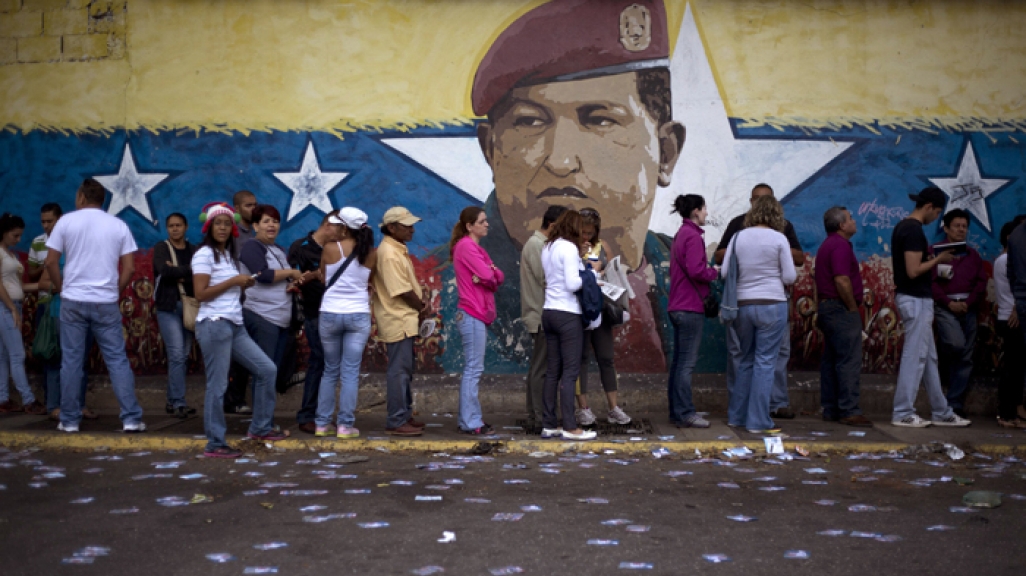 The opposition gained a historic victory—and a supermajority—in the National Assembly in December 6 elections.

Updated, December 9 — The Venezuelan opposition swept legislative elections on December 6, gaining a crucial supermajority in the National Assembly. The country’s National Electoral Council (CNE) released partial results that night, and took 48 hours from when polls closed to certify the final results on the evening of December 8: the opposition coalition Democratic Unity Table (MUD) won 109 seats, and the ruling United Socialist Party of Venezuela (PSUV) 55. The remaining three seats in the 167-seat assembly are held by indigenous groups, who side with the opposition.

The weighted, mixed-member voting system that favored PSUV’s majorities in the past this time worked against the governing party, as their 55 seats in the new session represent 32.9 percent of the legislature although they won 40.8 percent of the popular vote nationwide. The 112 seats give the opposition a two-thirds supermajority in the legislature.

The 167 deputies will serve five-year terms through 2021. The new session of the National Assembly begins January 5, 2016. Here are some of the key legislative measures they’ll have at their disposal:

Implications for Other Branches

Whereas most democratic countries have three branches of power—the executive, the judiciary, and the legislature—Venezuela has two more, explains Daniel Lansberg-Rodríguez, a professor of political economy and constitutional development at Northwestern’s Kellogg School of Management.

Through the Constitution instituted in 1999, when Hugo Chávez took office as president, the country’s electoral body became the fourth power, and the fifth is what’s called the “popular power.” The last one is admittedly “ill-defined,” Lansberg-Rodríguez told AS/COA Online by telephone, but ostensibly comprises local community organizations, funded by the federal government to carry out grassroots projects. “These are uncharted waters,” he says.

The country’s judicial branch, according to legal expert José Miguel Vivanco, has “no judicial independence” from the executive, as the president regularly appoints judges to provisional terms. This could change now that the legislature has the ability to remove judges.

As far as the executive branch goes, Maduro, whom voters elected in April 2013 to a six-year term, is facing a withering approval rating that last stood at 32 percent—and that was an 11-point increase over the previous month. A recall referendum is within the realm of possibility. While the legislature cannot call for a referendum itself, the two-thirds supermajority allows the opposition to remove Supreme Court justices and to call a constituent assembly or constitutional reform that could potentially dissolve other branches of government and replace them with temporary appointees. These scenarios would also make it difficult for the CNE to block any recall referendum.

The electoral body "has a lot to lose," says Lansberg-Rodríguez, as it is perceived as pro-chavista; a November Venebarometro poll found that 58.3 percent of people believe the CNE favors the Maduro administration.

One of the biggest tasks is for the opposition coalition to define a unified agenda, experts said at a November 13 AS/COA panel. While opposition to the Maduro administration gave MUD a clear focus, the next steps are less certain. In particular, some factions are keen to push regime change immediately, while others would rather wait out the current economic crisis while Maduro is still in power, says Lansberg-Rodríguez. He adds that if the opposition moves too quickly and, for example, pushes for a referendum on Maduro before they've reached internal consensus or have increased their influence in the other four branches of power, they could hamstring such a measure. "The speed at which [the opposition] moves is vital to the country moving in the direction in which it very much needs to go," says Lansberg-Rodríguez.

Venezuela is living its harshest economic crisis in decades. A recent study found that three out of every four Venezuelans live in poverty, the highest rate since 1975. That figure never got above 55 percent under Chávez.

Adding salt to the electoral-loss wound, the price of oil—which made up 95 percent of Venezuela’s export earnings in 2013—is at $42 per barrel, the lowest price in almost seven years, after the Organization of Petroleum Exporting Countries (OPEC) failed to agree on production cuts at its December 4 meeting.

In the end, the election results show the economic woes may have been more than a politician can weather, says AS/COA Director Guillermo Zubillaga. “I don’t think Chávez would’ve remained as popular with the current economic conditions the country is facing.”