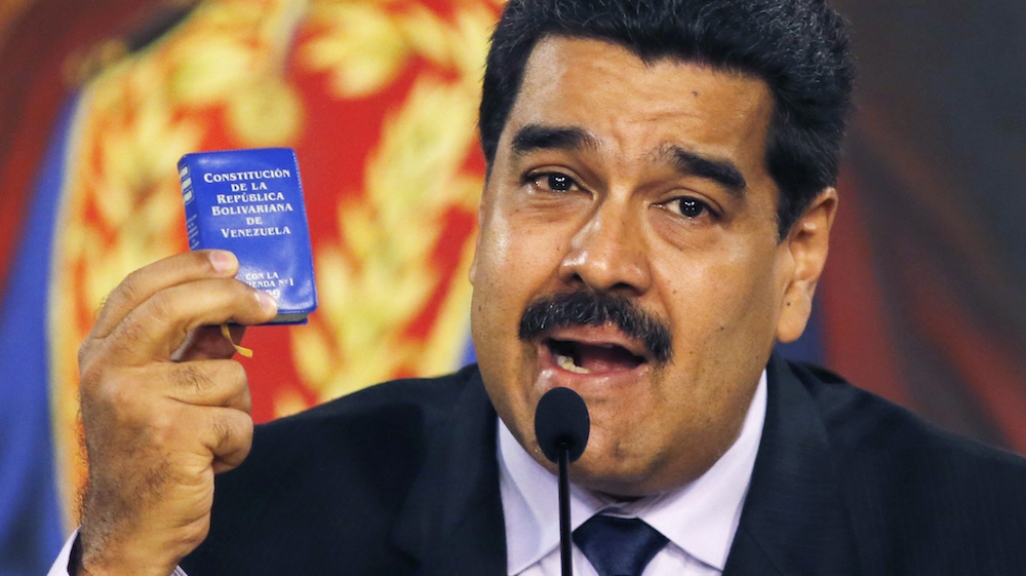 The suspension of the recall referendum is just one more case in a growing list of violations against the country's magna carta.

It was never going to be easy for Venezuela’s opposition to recall President Nicolás Maduro. But last week, it became clear that it might never happen after Venezuela’s National Electoral Council indefinitely suspended the national referendum process on the president. Some political observers say that the suspension of the referendum and elections in general mean the Bolivarian country can no longer be considered a constitutional democracy, but rather a dictatorship. That said, the process did not happen overnight. Several key moves by the Maduro government—which controls the executive, judicial, and electoral branches of power—undermined the country’s Constitution over the course of the last year.

After months of delays, on October 20 the National Electoral Council (CNE) suspended the recall referendum against the increasingly embattled president. On Sunday, in a special session that was interrupted by pro-government protestors storming the room, the National Assembly passed a special resolution declaring that the CNE’s ruling broke constitutional order. The resolution cited Article 333, which gives Venezuelan citizens the right to reestablish the Constitution’s vigilance if and when they see it is revoked or not observed. Chavista officials responded by calling the resolution an effective coup d’état and hinted that they might move to dissolve the Assembly in response.

On Tuesday, after Congress opened a political trial against the president for violating constitutional order, Maduro announced he was invoking Article 323, which convenes the National Defense Council to evaluate the Congress' move. (Incidentally, the speaker of Congress, opposition leader Henry Ramos Allup, should legally be part of the Council.) That same day, the head of the armed forces and effective head of government Vladimir Padrino López called on congressional opposition leaders to treat the Constitution "with seriousness."

The CNE issued the suspension after lower-level courts upheld injunctions against the recall filed by four ruling-party governors who alleged fraud—although presenting no public evidence—in an initial round of signature gathering that took place in May.

The process for recall referenda is laid out in Article 72 of the Venezuelan Constitution of 1999, and in a February 2007 resolution from the CNE. The Constitution requires that signatures be gathered from 20 percent of registered voters on the national electoral registry in order to hold the referendum; it makes no state-level requirements. Chapter 2 of the section on the executive branch affirms the roll of recall in the democratic process “by subjecting the president to the will of the people.”

In this year’s recall referendum against Maduro, the CNE required two stipulations not found in the Constitution: that an initial 1 percent signature-gathering take place before the 20 percent round, and that the signatures gathered represent 1 percent of registered voters from each of the 23 states, plus the capital district. A special CNE resolution—not published online but reviewable only in CNE’s archives in downtown Caracas—stipulates the 1 percent round, and the CNE announced the state-level requirements for both signature-gathering rounds this year.

Two days before the referendum suspension decision, CNE head Tibisay Lucena announced on October 18 that the elections of 23 governors and 237 state legislators slated for December 2016 would take place in March or April of the following year. While Lucena did not give a specific reason for the delay, two weeks earlier Maduro said that elections were “not a priority” for his administration as it grapples with the ongoing economic crisis. Governors and other state-level officials serve four-year terms, as laid out in Articles 160 and 162. The last regional elections took place December 16, 2012, with governors and state officials taking office January 5, 2013.

3. The Supreme Court takes away budgetary oversight power from Congress.

The Supreme Court (TSJ) ruled on October 11 that the president’s budget will be approved by the Constitutional Chamber of the TSJ and not by the National Assembly, as mandated by Article 187. The court did so, it said, on the basis that it holds the opposition-led Congress in contempt, and so the country is under rule by emergency executive decree.

4. The Supreme Court shuts down every piece of legislature passed by the opposition-led Congress.

On September 2, The TSJ declared every act of the National Assembly “absolutely null and void” and “manifestly unconstitutional.” The court did so on the basis that it holds the Assembly in contempt because Speaker Ramos Allup went ahead and swore in three deputies from indigenous populations who were elected in December 6, 2015, legislative elections. The CNE affirmed their election, but the Electoral Chamber of the TSJ allowed an injunction filed by ruling-party officials on allegations of fraud and has held up the deputies taking office since. The deputies, if the courts recognized them, would afford the opposition a 112-seat supermajority in the legislature, which gives Congress power to remove judges from the bench.

The judiciary has ruled against the legislature at least 30 times in 2016 on everything from amnesty for political prisoners to government housing contracts to declarations of a health crisis.

In three instances, the Venezuelan Constitution recognizes a division of powers between the branches of government. In particular, Chapter 3 on the judicial branch recognizes that a democratic state “requires” the institutional independence of every branch. But a controversial 2004 law passed by the National Assembly (then under a chavista majority) placed the judiciary under the control of the executive, thereby removing judicial independence and separation of powers. The judiciary has not ruled against executive interests in more than 45,400 cases since.

On December 23, 2015, the National Assembly, then still controlled by chavistas, rushed through the appointments of 13 new judges and 21 substitutes after a handful of seated magistrates opted for an early retirement. Legal experts called into question the constitutionality of the appointments, most notably that only two of the judges presented full credentials and the Assembly approved the justices’ appointments without going through the full review period. In July, the opposition-controlled National Assembly approved a resolution to remove those judges from the bench using the power of a supermajority Congress, per Article 265. The TSJ promptly overturned the resolution.