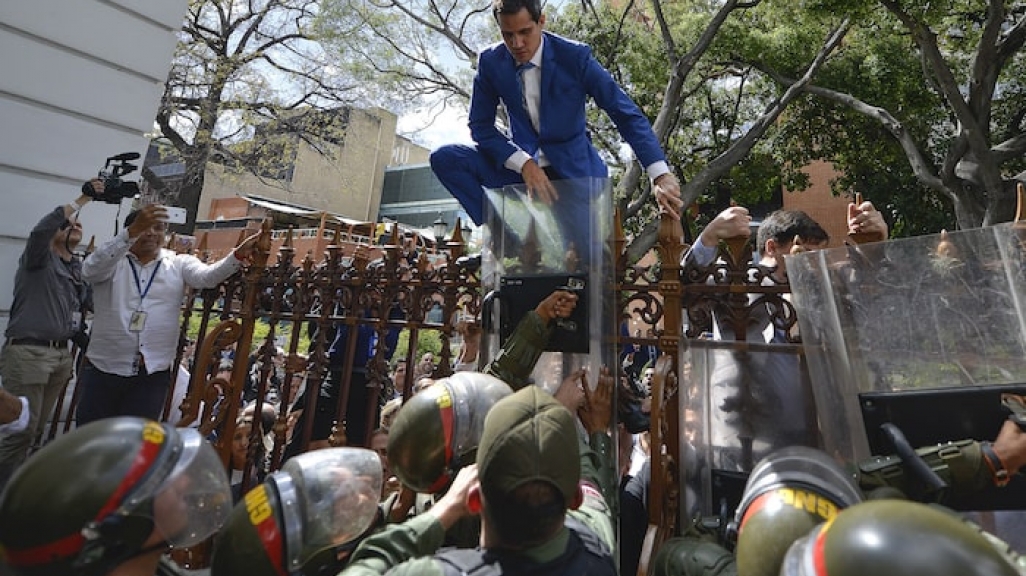 The chaos is part of Nicolás Maduro’s strategy to keep the opposition on its heels and to consolidate power, says the AS/COA vice president in this Q&A.

Venezuela already has two men who claim to be president. By the end of January 5, it had two men who claimed to be the head of the National Assembly. AS/COA Vice President Eric Farnsworth breaks down Sunday’s events and looks ahead to more turmoil expected to come.

AS/COA Online: What was supposed to happen on Sunday in Venezuela? And what did happen?

Eric Farnsworth: What people anticipated was that the National Assembly of Venezuela would convene and reelect Juan Guaidó as the head of the assembly, and by doing so, that would keep him in a constitutional role as the interim president of Venezuela. What happened instead was that, despite several weeks of efforts to undermine the vote, the Maduro government was unsuccessful in turning away enough votes from Guaidó to guarantee that he wouldn’t be elected, so they decided to try and keep him out of the National Assembly by force. When he and a number of his supporters weren’t able to get in, the pro-Maduro forces declared a quorum and elected somebody else who had just announced his candidacy that morning.

It was a complete farce. It’s hard to believe that anybody could have done this with a straight face, but they did. And what it forced Guaidó to do was reconvene with his supporters later in the day in the editorial offices of a newspaper and run for reelection. And indeed he was reelected with 100 votes and a quorum. He was recognized immediately by the United States, the Lima Group, and other countries in Latin America and Europe as the legitimate head of the National Assembly in Venezuela.

This is the outcome most people expected but it took a circuitous route to get there, and things have become much more complicated in the interim.

AS/COA Online: Looking ahead to the short- or medium-term, where does Guaidó go from here?

Farnsworth: It’s clear he has to do something to recapture the momentum of the movement. People keep talking about the “divided opposition.” I don’t know if that’s true; I think everybody is united in their opposition to Maduro. The question is tactics and who they might support as the leader. Now that Guaidó has been reelected as the leader of the National Assembly, it’s clear that he has the mantle of leadership, but he’s going to have to do something in the near-term to provide the hope that indeed … that Maduro will be moving on. Without that hope, that sense of ultimate victory, it’s going to be difficult to keep the amount of support required to maintain the leadership of the movement. So I think you’re going to see some steps taken along those lines, probably in coordination with the United States and the Lima Group at a minimum, to try to pressure Maduro here in the near-term. And if those aren’t successful, I think what you’re going to see increasingly is that disaffected elements, perhaps outside of Caracas in other states in the western part of the country, are going to try and take matters into their own hands. And I think at that point, then the situation in Venezuela becomes much more chaotic and potentially much more violent.

AS/COA Online: There are supposed to be legislative elections later this year. Do you think Maduro will try to wait it out until there are new elections or might they try again to undercut Guaidó in his role now?

Farnsworth: Maduro has proven, along with his Cuban advisers, to be a very clever tactician. I don’t think we can say today what he is going to do, but I think we can have full confidence that he is going to do everything possible to keep the interim government on its back feet, on the defensive, and guessing. And if that means moving up the date of the elections, I’ve no doubt he’d do that. If it means, cancelling them—which I’m not predicting but—he’d do that. My point is that he’s willing to do whatever it takes … to get the outcome that he desires, which is an electoral result that clearly represents a takeover of the National Assembly by legislators loyal to him. We may have an indication as early as the next day or two when Guaidó is apparently going to try to take possession of the actual legislative building again and could very well have some sort of chaotic situation with Luis Parra, who claims leadership of the assembly at this point. We’re going to see some additional chaos here in Venezuela at the political level and I think Maduro is going to wait and see how that plays out.

But there’s one other thing that we can’t miss: at the end of the day, it doesn’t really matter to Maduro if this or that legislator is in power. The chaos is what he feeds on. Because, so long as legislators are fighting themselves and worried about who’s the leader of this and who’s the factional head of that, it doesn’t really matter—they can’t do anything to affect the regime’s behavior anyway. It’s like [Maduro is saying], “Look at the shiny object over here, and take your time and attention and spend it over there. Meanwhile, I’m going to be destroying the country over here and you don’t have any bandwidth to try to affect me or change my ability to impact events.” It’s a distraction. Maduro wants the National Assembly clearly in his hands, and if it takes a chaotic situation and some time to get there, I don’t think that’s something that he cares that much about. So with all that said, will he act to postpone or move up the date of the election? I don’t know, but I think everything that he does is going to be with one goal in mind: to continue to consolidate power across every institution in Venezuela.

AS/COA Online: On Monday, the U.S. Senate Foreign Relations Committee issued a statement reiterating its support for Guaidó and also calling on the EU to “join the United States and the Lima Group in taking strong actions against Maduro and his cronies.” What strong actions is the Senate referring to here?

Farnsworth: Sanctions primarily. The Europeans have not sanctioned individuals or institutions at the same level that the United States has, in part because there’s a divergence within Europe about the approach toward Venezuela. Europe is not one single entity as you know, everybody gets a vote. And if you have Spain and Greece on one side and everybody else on the other, you can delay a bunch of actions and so it’s a least-common-denominator sort of approach. So when you have countries that are reluctant to penalize Venezuela, then it limits what the EU can actually do as an entity. So that’s something the United States will continue to push on, particularly Spain, to try to get the Spaniards to implement and enforce sanctions in a more robust way.

This interview has been edited for clarity and length.