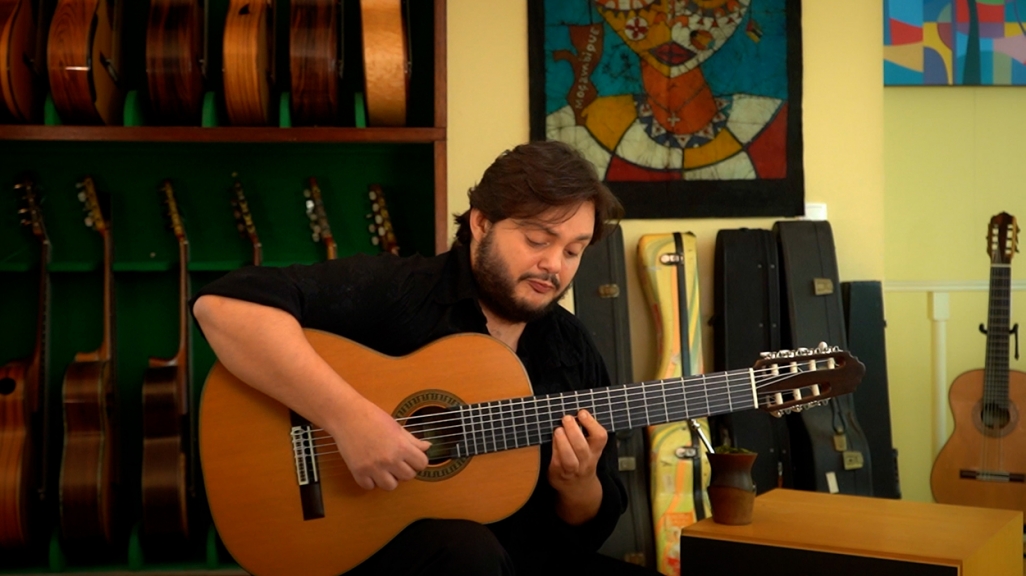 We revisit Costa's concert, plus a new video featuring Gieco and Fumero and contemporary music from Argentina with counter)induction.

Music of the Americas presents the final edition of its 2020 video series En Casa (At Home), and Recuerdos (Memories) this week. Our Recuerdos series, which features releases of memorable past performances at Americas Society, begins with two pieces from the wonderful virtual concert that Yamandu Costa gave in November, while En Casa, our series of original daily performances with musicians from around the Americas, features a transatlantic collaboration between Argentine superstar León Gieco and his longtime collaborator (and Music of the Americas friend), bassist Horacio Fumero.

On Thursday evening, we close the 2020 Music of the Americas concert series with the return of counter)induction to our (virtual) stage in a program of Argentine and Mexican new music.

Thank you for joining us in 2020! We will be back on January 11 with more En Casa and Recuerdos with a week of early music curated by soprano and Co-director of our GEMAS series, Nell Snaidas.

Costa's Music of the Americas debut last month was a whirlwind of virtuosity and creativity. We chose two tracks from that concert to share this week. The first is "A Legrand," a piece Yamandu composed as an homage to French composer Michel Legrand. Costa says that he can imagine a string orchestra joining him in this piece, but until then, his guitar is definitely lush enough.

León Gieco and Horacio Fumero, two illustrious cañadenses and longtime collaborators sent us their version of Cuchi Leguizamón's "Maturana," which they recorded across the ocean. Leguizamón, who died in 2000, was one of the most important composers of Argentine folk music. This melancholy zamba, with lyrics by Manuel J. Castilla, tells the story of a Chilean lumberjack called Maturana and was made famous by Mercedes Sosa in the 1980s.

This concert will be webcast here.

counter)induction returns to Music of the Americas with music by Latin American female composers featuring world premieres as well as a new arrangements prepared expressly for this concert. The program includes works by Cecillia Arditto, Gabriela Areal, Natalia Solomonoff, and Mariana Villanueva from Argentina, and Marina Lopez and DM R from Mexico.

Costa's concert last month ended with the upbeat "Sarará," in which he also sings, so we chose this piece to also close our week of Music of the Americas.

Support for Yamandu Costa: Solo was provided by The Augustine Foundation and the Consulate General of Brazil in New York.