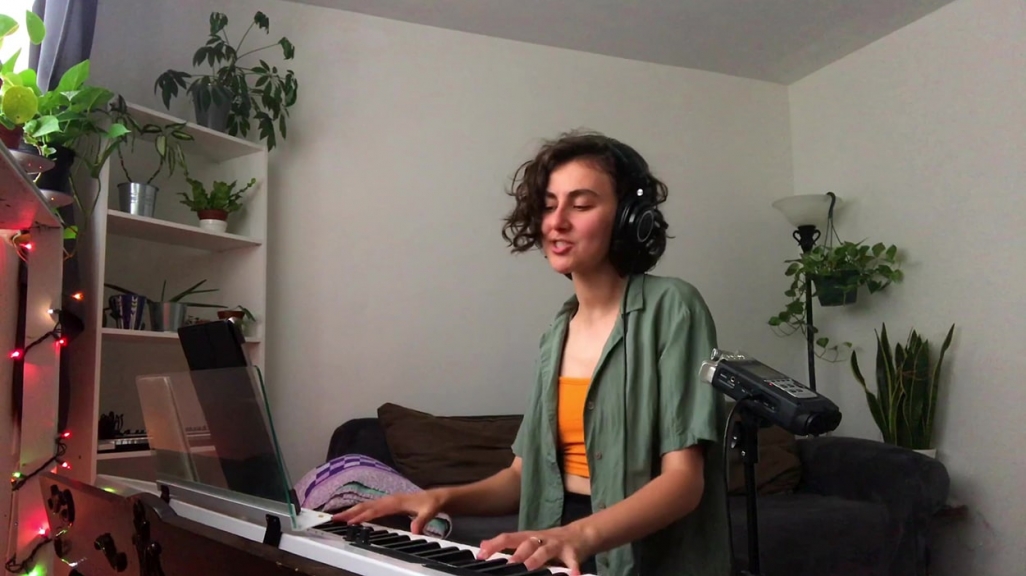 Raised in a musical family in New York (En Casa audiences will remember the video and curatorial week produced by his father, bassist Pablo Aslan) and based in Montreal, where he recently graduated from McGill, the U.S.-Argentine composer, composer, sound designer, and drummer Rafa Aslan creates an extensive range of music from his home studio, including several commercials for national campaigns and independent albums. At McGill, Rafa studied jazz performance and composition under John Hollenbeck and Christine Jensen, as well as electroacoustic composition under Philippe Leroux. He has performed with classical orchestras and jazz bands. He was also a member of Arturo O’Farrill’s Fat Afro Latin Jazz Cats, with whom he performed at Birdland and the Brooklyn Public Library. He sees his love of music as a vehicle to grow and connect with others.

We asked Rafa to select a week of music by fellow experimental musicians from his adopted city, and also to record a video himself, which we will share on Thursday evening. Catch up on all the En Casa and Recuerdos.

Sarah Rossy is a mythical sonic creature of sorts, with a voice that is colorfully chameleonic yet vulnerable and human. Bouncing between Tio’tia:ke (Montreal), New York, and Berlin, Rossy combines influences of jazz, experimental music, and interdisciplinary movement practices into her work for a truly unique result. As a composer, she has a keen interest in experiential processes which traverse through a feminist lens and nurture the ecosystems of artistic community. Rossy is a recent (and the first Canadian) finalist of the Ella Fitzgerald International Voice Competition, and holds degrees from McGill University.

She wrote this about her song "Big Leap," which she recorded at home:

"Recent times have destabilized and redefined our idea of what “home” truly is. I wrote this song after a recent visit to a small town in Eastern Canada after spending a year and a half trapped in Montreal’s urban city center. Exploring the bittersweet nature of the many ways that one can define where home is, the song recounts the polar pull between choosing the small town and the big city."

Christopher Edmondson is a multi-instrumentalist and composer currently living in Montreal. He has lent his musical mind to many artists for recording and performance including the Plastic Waste Band, Kyle Hutchins’ Experimental Kindness, Alex Rand Band, The KOUNT, Jesse Futerman and FOREVER. He holds degrees from McGill University where he studied under John Hollenbeck, Christine Jensen and Michel Lambert. He currently composes for his 12 piece chamber ensemble and recently finished a commission for solo violin.

Edmonson writes about his piece:

"Losing Light (summer knights)" is a short piece attempting to evoke the feelings of late nights in the summer. It comes in many forms—staying out late while exploring the city until dawn, not being able to sleep due to an unbearably hot apartment, swimming in a lake under the stars. "Losing Light (summer knights)" is boundless and youthful, humid and moist, chaotic yet calm."

Chris Ross is a Montreal musician originally from Boston. Though primarily a freelance bassist, he has recently returned to his roots in vocally-driven story songs and synth-inspired pop music. Coming from a musical family, he is inspired by the music of his siblings. About his song "November," Ross writes:

"This is a song about getting older. Written on my birthday, it was one of the most free-flowing writing experiences of my life with the song being fully written in less than 30 minutes. Everyone in the world experienced a pandemic birthday and it was an incredibly melancholy day for me as someone who usually loves to be surrounded by friends and family."

Theo Abellard is a leader in the new generation of young Canadian jazz players. He is a virtuoso pianist and a composer with a profound artistic voice. Growing up in church he developed a spiritually transcendent approach to music making. He sent us this version of his "P&W," and tells us about the piece:

"The title stands for praise and worship. The worshipper offers an honest offering to bring healing to everyone and everything around and within."

Aslan says about his contribution to the week:

"Using effects, triggers, knobs, faders, a synthesizer and a drum set, "Finesse" is an exploration of a single sample and the interaction of electronic and acoustic performance practices. The original sample is from "Rivers of Sand" by Austrian guitarist Fennesz."

Rodolfo Rueda is a musician and photographer based between Lima and Montreal. He is currently studying at the Schulich School of Music at McGill University. Rueda is the former bassist for the Peruvian band Santa Madero and free improviser who seeks to explore different genres and multidisciplinary projects in order to expand his knowledge in art.

"CIBER1A" is Rueda's new solo project, influenced by cinema, photography, electronics, pop, and experimental music, starting from the idea of ​​audio appropriation through sampling. Many of the instrumentations are created from home audio "debris," recorded throughout the COVID quarantine. "ORO SOLIDO" is a collage with influences from old-school reggaetón, while trying to make the samples create rhythms by processing them in various ways.