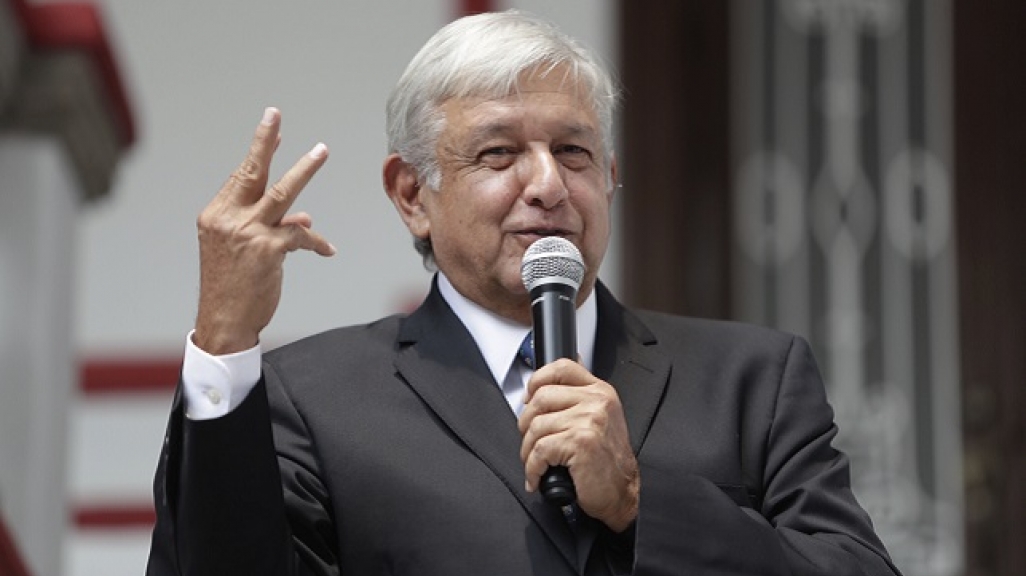 It’s been three months since Andrés Manuel López Obrador won Mexico’s presidential election, and he still has to wait until his December 1 inauguration to kick of the “fourth transformation” of Mexico that he promised voters. Unlike President Enrique Peña Nieto, incoming president AMLO holds press conferences regularly. That’s given the media plenty to cover, even if the president-elect’s interactions with journalists—whom he’s called corazoncitos and fifí (“sweethearts” and “elitist”)—don’t always go smoothly.

The future president is already pushing a number of proposals, including lowering and limiting officials’ salaries, planning a touristic and cultural “Maya Train” on Mexico’s Yucatán Peninsula, and boosting the country’s refining capacity.

Here’s a look at four of the main issues dominating the transition period: an airport, violence, education, and U.S. relations.

1. The airport. For much of his campaign, AMLO talked about shutting down construction of a new $13 billion Mexico City airport that serves as the hallmark infrastructure project of the Peña Nieto administration. The X-shaped airport, which would become the biggest in the Americas, will open in 2020 and have the capacity to serve 125 million passengers annually when done in 2022. But the project’s been a source of controversy for reasons ranging from corruption concerns to the price tag to it getting built on top of the Texcoco marshlands on the outskirts of the capital.

One thing everybody can agree on is that Mexico City needs to expand its air travel capacity, and López Obrador proposed an alternative: adding two runways to the Santa Lucía military base. But a group of engineers already suggested to AMLO that finishing the new airport is a more viable option.

The incoming president’s team is planning to hold a national consultation at the end of October to allow the public to decide on the megaproject’s fate. If polls prove correct, Mexicans will likely back it. An El Financiero survey released September 25 found that 63 percent support finishing the new airport, up from 54 percent a month earlier.

When it comes to air travel, AMLO plans to sell the presidential jet and take commercial flights, even after experiencing a lengthy delay at an airport on Mexico’s Pacific Coast in September, when he said he would be ashamed to use “a luxurious plane in a country where there is so much poverty.”

2. Violence. Grim news keeps coming about Mexico’s violence levels. Homicide figures rose above 22,000 in the first eight months of 2018—a record number, and an 85 percent increase over the same period just three years ago. On average, four people are killed each hour in Mexico and, out of every 100 murder cases, only five result in convictions, reports Animal Político.

Then there are the disappeared. More than 37,000 Mexicans went missing in the past 15 years, and last year only Syria counted a greater number of forced disappearances.

Since 2000, the portion of Mexican voters who see the lack of public security as the country’s biggest problem has doubled. While the Peña Nieto administration sought to shift Mexico’s narrative away from the bloodshed, the president-elect has taken a different and symbolically important approach, appearing in open forums to discuss violence and hear from victims. On September 26—the fourth anniversary of the disappearance of 43 students who attended a teacher’s college in Ayotzinapa—AMLO met with the families of those who went missing and pledged a new investigation when he takes office. The family members have criticized the Peña Nieto administration’s handling of the case, while independent investigators poked holes in the government version of what took place.

While the public meetings allow for an acknowledgment of painful wounds and a promise of healing, the big question is how the AMLO administration plans to rein in violence and impunity. In another emblematic event, three days before the fiftieth anniversary of the student massacre in an area of the capital known as Tlatelolco, López Obrador spoke in the plaza where the military shot and killed hundreds of peaceful activists in 1968, and he pledged that the military will never again be used against the public. He also proposed creating a civil guard that would serve as an “army of peace” made up of the military and federal police. On the campaign trail, AMLO suggested sending the military—first deployed in December 2006 to battle organized crime groups—back to the barracks. At the event in Tlatelolco, AMLO said the police remain unprepared to handle the country’s runaway crime problems, echoing an admission he made in August.

Such recalibration of expectations by the president-elect may well be an indication that the transition team is getting a handle on the complexity of the problem. Overall, AMLO’s “abrazos, no balazos” (“hugs, not bullets”) approach involves ideas such as amnesty for nonviolent criminals engaged in the drug trade, expanding social programs, professionalizing and building police forces, and weighing steps toward legalizing marijuana and regulating poppy production.

The devil, of course, is in the details. AMLO said in August that he will release his security strategy in November.

3. Education. Early in his six-year term, Peña Nieto ushered in a series of major constitutional reforms, including one that sought to better Mexico’s troubled education system. A key aspect of the reform involves implementation of a teacher evaluation system that proponents said will help end practices such as allowing people to pay for or inherit teaching posts, regardless of teaching abilities. But the evaluations, seen by opponents as punitive rather than taking into account teachers’ ongoing training needs, drew criticism from Mexico’s powerful teachers’ unions, and López Obrador had harsh words for the reform while on the campaign trail.

AMLO has even at times gone further than suggesting he’d simply revisit the reform, promising to repeal it—despite the fact that his transition team is supposed to first assess next steps by holding a total of 32 consultations across the country with specialists, students, families, and civil society groups. The future president threatened the reform’s existence again in September while in Oaxaca, a state gripped for decades by teachers’ strikes, particularly those led by the CNTE—the union that backs the reform’s complete cancelation. At the end of the same month, AMLO’s proposed education secretary said that teachers who lost their jobs for failing to take the evaluation exam will get back their posts.

Given that AMLO’s party, MORENA, holds a legislative majority since the new Congress came into session in September and will control enough state legislatures to ratify constitutional reforms, it’s fair to say the education reform is at risk. Mario Delgado, MORENA’s coordinator in the lower house, went so far as to say “not even a comma” of the reform would remain, while pledging new legislation focused on education rather than on labor, which is how opponents characterize Peña Nieto’s reform, given that the evaluation system deems whether or not teachers hold on to their posts.

In September, the Organization for Economic Cooperation and Development (OECD) called for an analysis of the existing reform to determine which measures are or are not producing results. The OECD did urge continuing specific pieces of the legislation, such as a government census to gain an accurate tally of students and teachers and the implementation of an educational model that follows the agency’s recommendations.

4. Washington. U.S. relations didn’t count as a deciding factor for Mexican voters, but the renegotiation of the North American Free Trade Agreement (NAFTA) has been a dominant issue during the transition period. It was Peña Nieto’s team that carried out the artful negotiations leading to the announcement of a new trilateral United States-Mexico-Canada Agreement (USMCA) at the eleventh hour of a September 30 deadline.

But U.S. President Donald Trump’s public admiration—at least for now—for the president-elect probably didn’t hurt either. Trump, a big fan of winning, sees a winner in AMLO, who beat his next-closest rival by more than 30 points, and he’s described the future president as “great” and “a terrific person.” Trump commended collaboration between the Peña Nieto and AMLO teams during the negotiations, calling the teamwork “fantastic.”

For his part, AMLO has major challenges to deal with when he takes office, so is likely pleased that the NAFTA/USMCA deal is one big step closer to being done. Trump, celebrating the deal as a victory ahead of the U.S. midterms, called for the accord to be inked at the end of November, meaning just before AMLO takes office. Of course, that’s not the end of the story: all three countries’ legislatures then have to ratify the deal.