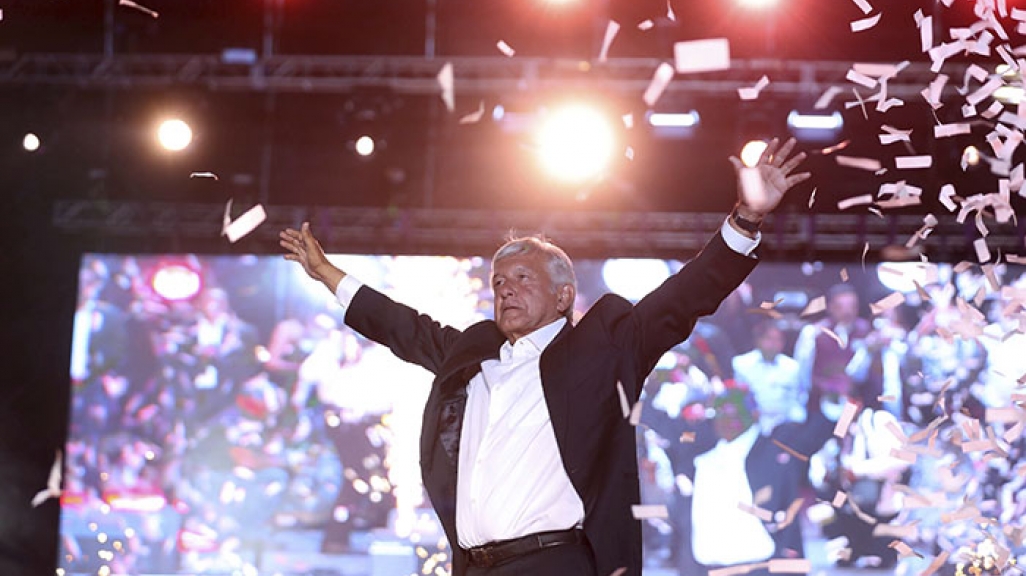 The other candidates conceded to AMLO on July 1. (AP)

The third try turned out to be the charm for Andrés Manuel López Obrador, Mexico’s next president.

In his first speech as the next president of Mexico, Andrés Manuel López Obrador called for reconciliation in the wake of a divisive race and amid discontent over large-scale violence and corruption that sparked a devastating loss for the sitting government. “I will not fail you,” López Obrador, or AMLO, told supporters in a subsequent victory speech in a packed Zócalo, Mexico City's main plaza. His remarks repeated past pledges to respect the independence of the central bank, review oil contracts, avoid raising taxes or gas prices, and battle corruption.

It remains to be seen how the leftist will solve the grave problems that drove voters to give him what appears to be a landslide win, and final official results could take days. But here are quick takes from the ground on his win in his third go at the presidency.

1. The outcome was smooth and peaceful on the night of July 1.

In the past, fraud allegations marred Mexican elections. Andrés Manuel López Obrador himself challenged the results of the 2006 vote when he narrowly lost to Felipe Calderón of the National Action Party (PAN).

But recognition of AMLO’s victory came swiftly in what many observers hailed as a sign of Mexico’s healthy democracy. Minutes after the release of exit polls at 8 p.m. in the capital, José Antonio Meade, conceded. “[AMLO] will bear the responsibility of holding the executive power, and I wish him the best of luck,” he said. Although Meade generally polled third throughout the campaign, his quick recognition of the results was perhaps the most important, given that he served as the candidate of the unpopular governing Institutional Revolutionary Party (PRI). Ricardo Anaya, AMLO’s top rival, of the PAN acknowledged his own loss shortly after, as did independent Jaime “El Bronco” Rodríguez, who trailed in the number four spot.

President Enrique Peña Nieto congratulated AMLO within hours as well, pledging his government’s support during the transition lasting until the December 1 inauguration.

2. The polls were largely right.

Throughout the race, AMLO held a strong lead that only increased as the elections neared. In the final weeks, some observers questioned whether undecided voters could help bridge the gap between the frontrunner and Anaya, or if the numbers could be trusted at all. But, as pollster Jorge Buendía told AS/COA Online ahead of the vote, “The people that are saying ‘Don’t trust the polls’ are the ones who are supporting candidates who are in second or third place.”

The polls turned out to be correct. They may, if anything, have slightly underestimated the winner. The electoral agency’s rapid count estimates AMLO will win with 53.0 to 53.8 percent of the vote, compared to 22.1 to 22.8 percent for Anaya and 15.7 to 16.3 percent for Meade.

If those numbers hold, López Obrador will be the first president to win more than half of the vote since 1988, when the PRI’s Carlos Salinas de Gortari earned 50.74 percent in a victory marked by accusations of fraud.

3. AMLO’s coalition could gain the upper hand in Congress.

What about legislative checks and balances? Exit polls indicate MORENA, López Obrador's party, will be the one to hold the largest portion of seats in both the upper and lower house of Congress. It also appears MORENA’s alliance with the leftist Workers’ Party and socially conservative Social Encounter Party will make their coalition, Together We Will Make History, the largest in both the Senate and Chamber of Deputies.

While the Mexican peso seemed to strengthen after Meade’s concession speech, it dropped again with news of the coalition’s strong congressional showing before stabilizing at close to 20 pesos to the dollar.

U.S. President Donald Trump's anti-Mexico rhetoric was far from a determining factor in AMLO’s victory, with concerns about violence, corruption, and the economy looming far larger for voters. Sure, Mexican approval of the United States plummeted from 66 percent in 2015 to 30 percent in 2017, but bilateral relations ranked tenth among voter concerns in March poll.

Still, how the incoming government will handle relations with its neighbor is a question, given the uncertainty of NAFTA’s fate, trade war threats, and AMLO's promise—in an allusion to the White House—that he wouldn't let Mexico be a piñata for any foreign government. While much remains unclear, Trump did take to Twitter to congratulate the future president and say, “I look very much forward to working with him.”