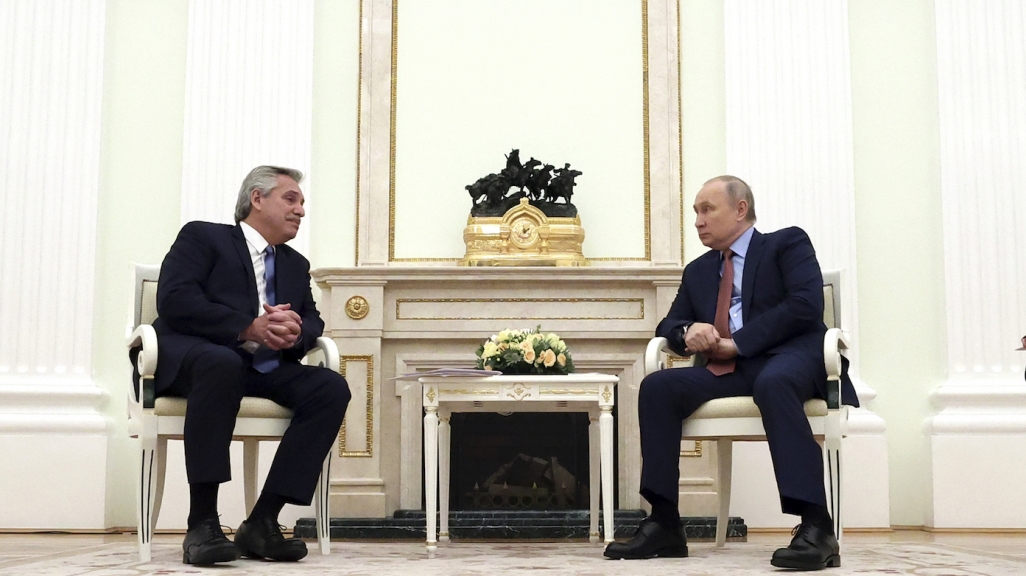 The Latin American Subplot in the Russia-Ukraine Drama

Against a backdrop of rising geopolitical tensions, AS/COA Online looks at Russia’s recent moves in the Americas.

With thousands of Russian troops lined up along the border with Ukraine, global attention remains squarely on whether Moscow will leverage its military might to advance its interests in eastern Europe. But Russia’s actions extend beyond its next-door neighbors.

In Latin America, Moscow has threatened to send troops into Cuba or Venezuela, while holding high-level meetings with other hemispheric leaders. Such steps are raising eyebrows in Washington, though one senior White House official referred to the commotion as “bluster.”

In 2021, Russia started moving troops to its western border with Ukraine and into Crimea, an adjacent peninsula at the top of the Black Sea that Moscow seized in 2014. By February 4, at least 130,000 troops were stationed on the border. Russian President Vladimir Putin, who asserts that portions of Ukraine should be part of its own territory, is concerned that Ukraine may join the North Atlantic Treaty Orgnization (NATO), the military alliance of North American and European countries founded during the Cold War. As of now, Ukraine is considered a NATO partner, but not a member.

The United States and its allies have called for Russia to demilitarize the border, yet are sending troops to the region.

In response, senior Russian officials suggested in January that inference by the United States or NATO in Ukraine could prompt the deployment of Russian forces to Cuba or Venezuela. That would place Russian military in the Americas, drawing the “bluster” call from U.S. National Security Advisor Jake Sullivan. “If Russia were to move in that direction, we would deal with it decisively,” he told reporters on January 20.

If Russia sees its threat through, it wouldn’t be the first time Moscow carried out military exercises in either Cuba or Venezuela. During the Cold War, Russia placed nuclear warheads just 90 miles from U.S. shores during the Cuban Missile Crisis of 1962.

More recently, it sent troops to Venezuela in 2019 in a move that was seen as signaling support for the Maduro regime against possible U.S. action. Russia retains ties with Venezuela through a robust bilateral arms and oil trade. In 2019, Venezuela purchased 36 Russian fighter jets for $10 billion, received $1.1 billion in oilfield investment from Russian companies, and another $4 billion in Russian investment. Moscow also continues to help Venezuela evade U.S. sanctions by providing financial services, loans, and assistance with oil sales to Caracas.

Alongside Cuba and Venezuela, Nicaragua is also a Russian ally, with Moscow supporting the three countries in a variety of ways, including arms sales, cryptocurrency collaboration, debt forgiveness, and alleged anti-narcotics efforts.

Meanwhile, Putin is courting regional presidents, having met with Argentine President Alberto Fernández and with an upcoming visit from Brazilian President Jair Bolsonaro on the calendar.

Putin and Fernández met on February 3 in Moscow, where the latter thanked the former for Russia’s aid in Argentina’s vaccination campaign. Argentina became one of the first countries worldwide to approve Russia’s Sputnik V vaccine and sign a supply contract back in January 2021. The country received about 21 million Sputnik V doses over the course of the pandemic and Fernández himself has received three Sputnik shots. On December 6, Argentina approved Sputnik Light as both a standalone vaccine and a booster. As of the end of January 2022, Argentina had distributed about 27 booster doses per 100 citizens—on par with the U.S. booster rate.

But it’s not the only country that’s utilized Sputnik in its vaccine rollout. Ten in the region—among them Brazil, Chile, and Mexico—have approved Sputnik V, and three have approved Sputnik Light. Through the Russian Direct Investment Fund, Latin America has contracts for about 122 million Sputnik V doses. Many of the jabs were secured in the early months of 2021, when Latin America lacked access to vaccine contracts with manufacturers like Pfizer or Moderna. Still, there were problematic delays in Sputnik V deliveries in the summer of 2021. At the bilateral meeting, Fernández and Putin also discussed trade cooperation. Before the pandemic, bilateral trade between Argentina and Russia stood at about about $1.2 billion annually.

Once hailed as a cheap and accessible vaccine option for the region, Russia’s Sputnik V has run into delivery problems in Argentina, Guatemala, Mexico, and elsewhere.

At the February 3 meeting, Fernández said he’d like to see Argentina be less dependent on the International Monetary Fund and the United States for its macroeconomic stability. Three days later, Fernández went on to meet with Chinese President Xi Jinping and the two signed a memorandum of understanding for Argentina to join China’s Belt and Road Initiative.

Bolsonaro plans to meet with Putin in late February, despite domestic criticism of the meeting and its timing. The meeting was scheduled at the end of 2021 when the two countries’ foreign ministers met in Moscow. The trip is slated to include a business event, and a Brazilian agrobusiness delegation will accompany Bolsonaro. Brazil is Russia’s top destination for nitrate fertilizer, but Russian officials placed a two-month ban of exports on February 4, endangering Brazilian supply.

While Brazil hasn’t formally commented on Ukraine, it joined the United States in voting on January 31 to discuss the Ukraine crisis at the UN Security Council. The proposal passed, though Russia and China voted against it.