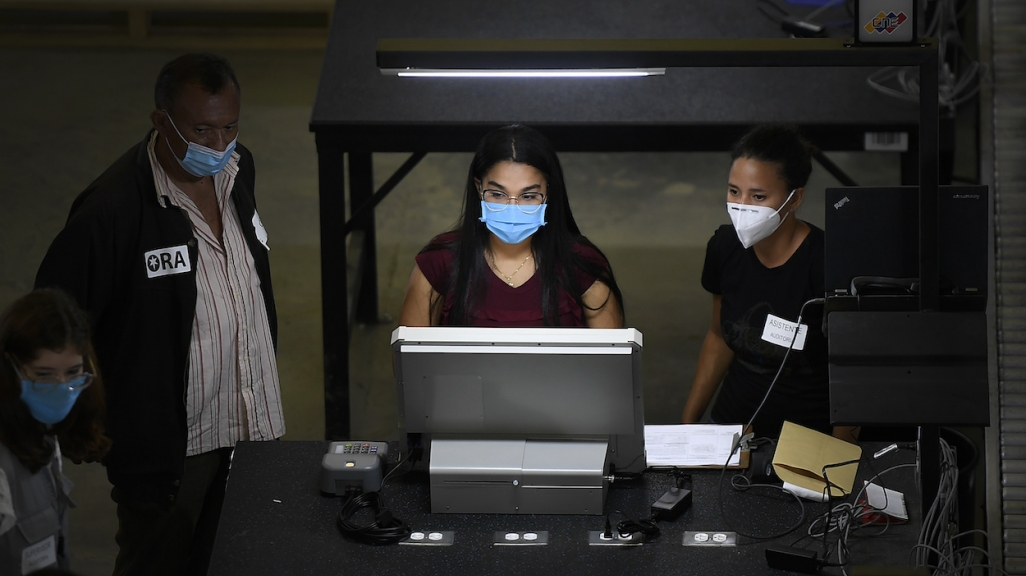 There will be legislative elections in Venezuela on Sunday that, if anything, serve as a testament to how much democracy in the country has deteriorated since the last ones five years ago. While even the 2015 vote was unfair, the opposition nonetheless won a commanding supermajority in the unicameral National Assembly that should have given legislators an effective check on the de facto administration of Nicolás Maduro. But through a continuous stream of dubious legal maneuvers, Maduro and the Supreme Court and National Electoral Council (CNE)—both branches of power stacked with chavista loyalists—have whittled away and in some cases outright usurped the opposition legislature’s constitutional powers.

AS/COA Venezuela Working Group head Guillermo Zubillaga and Vice President Eric Farnsworth discuss the circumstances of the vote and how international policy toward Caracas and the dueling administrations of Maduro and interim President Juan Guaidó might shift in 2021.

AS/COA Online: Venezuela is set to hold legislative elections on December 6. Of course the term “elections” should be used lightly. What election rules have changed this time around?

Guillermo Zubillaga: The Supreme Court increased the number of seats in the National Assembly from 166 to 277 deputies. Then the CNE effectively took away the indigenous vote by changing it so indigenous representatives are no longer directly elected. There was no due process whatsoever for such monumental changes.

The other big thing this election introduces is that the Maduro regime took over the opposition parties earlier this year. Imagine if the U.S. Supreme Court appointed the heads of the Democratic Party and Democratic National Committee and handed over party finances to them. It’s basically the judicial system entering the political arena in a really obvious manner. It’s hard when you’ve built a party from the ground up, then it’s suddenly taken over by the government—and you still have to participate in these elections? I see the frustration of people with the electoral system.

Also, a warehouse fire in March destroyed most of Venezuela’s voting machines, and the new system, which was introduced less than 60 days before the vote, hasn’t been fully vetted.

Another reason Venezuelans are skeptical or cynical about the elections derives from the last legislative elections in 2015. The opposition won an overwhelming majority of seats in the National Assembly, but before they could take office, the lame duck session quickly packed the Supreme Court. Since then, that court has basically called all the shots rather than the elected National Assembly. This has significantly eroded Venezuelans’ trust in the electoral process.

AS/COA Online: So if you’re someone like Guaidó, who holds this interim presidency based constitutionally on his election as a deputy in the National Assembly, and you decide not to participate in Sunday’s elections, what happens on January 5, 2021, when the new legislature is supposed to be sworn in?

Zubillaga: Well, that’s the million-dollar question. But, as many countries in the Lima Group and the European Union have already said, because of these known irregularities, they won’t recognize these election results. And there is a case constitutionally to continue to recognize the incumbent who came into office via a fair election. I also don’t think that investors or multilateral organizations are going to recognize Maduro again. Of course Russia and China will continue to recognize him, and they will be able to have certain guarantees for lending money to the regime, but I do not see any major multilateral organizations finding legal safeguard in something signed by the National Assembly that will take power on January 5. I do believe the dynamics on the ground will change and that might impact Guaidó himself, and the regime might try to do something for the optics.

Given the tragedy the status quo represents for so many Venezuelans and the persecution of civil society as we have seen recently, the international community is definitely going to have to say, “How do we approach this differently, given that what we did before did not really pan out in a free and fair and certifiable presidential election?” I think after December 6, there will be more of an understanding that the solution to Venezuela will require more than just another election without conditions.

AS/COA Online: In terms of the incoming Biden administration’s policy toward Venezuela, I take it we probably won’t hear as much talk per se of an armed invasion, which U.S. President Donald Trump liked to mention was “on the table.” What might be some other strategies?

Zubillaga: Not mentioning armed invasion, which is polarizing, would help to bring together the U.S. and its European Union allies. I also think we will see a return to multilateralism to try and solve the crisis and a more unified international community. What that may mean in practical terms is individual sanctions finally on more people who may have assets and families in Europe. I think also there is an understandable skepticism for dialogue with the Maduro regime because of their past example of using dialogue processes to gain time but not change behavior.

AS/COA Online: Eric, the Biden team is preparing for a transition in January. How do you expect U.S. policy toward Venezuela to change or not? Or, if it doesn’t change, how do you think the strategy will shift with the new administration and President-elect Joe Biden’s history with Latin America and also with the people who he has tapped for his Cabinet and his team?

Eric Farnsworth: I would anticipate a level of continuity at least until you get Biden’s Western Hemisphere team in place, and that seems to take longer every election cycle. I think the incoming Biden administration will try to find ways to address the Venezuela issue without making it the sole issue that the United States is focuses on in the region. I also think the United States will take a more forthcoming approach to humanitarian assistance, particularly to Venezuelans outside of the country. Biden has already said he’ll offer TPS [Temporary Protected Status] to Venezuelans. There are other nuances as well like using sanctions perhaps as a way to leverage negotiations with the Maduro regime rather than simply to punish people. I think there will be some nuances there, as well as an approach to other countries in the region and indeed other countries in Europe to try to burden share a little bit more in the context of putting pressure on the Maduro regime.

AS/COA Online: Over the last few years, Venezuela has been one issue of bipartisan cooperation on Capitol Hill. Do you think that will be able to continue? Do you think it is going to shift a bit in the next four years?

Farnsworth: I think it’s going to be really interesting to watch. Look at the U.S. election results that just occurred in early November in South Florida in particular two Democratic congresswomen lost their seats, which some attribute to how the Trump administration portrayed policy toward Venezuela and the region and the supposed shift that a Democratic administration and Democratic Congress might make. I would anticipate that from a political perspective people are going to tread lightly on these issues because it is a volatile issue and there are political costs to be paid if you get proselytized on the politics in terms of Venezuela, Cuba, or the idea of socialism in the Western Hemisphere. That is something that people will be wary of.

Katie Hopkins transcribed these interviews, which have been edited for length and clarity.

"The [Maduro] administration is consolidating control, and prospects for a peaceful transition appear increasingly bleak," writes AS/COA's Eric Farnsworth in The Banker.

The suspension of the recall referendum is just one more case in a growing list of violations against the country's magna carta.

Update: What Is Happening with Venezuela's Presidential Election?

Venezuela is holding presidential elections, but they’ll be far from free and fair.