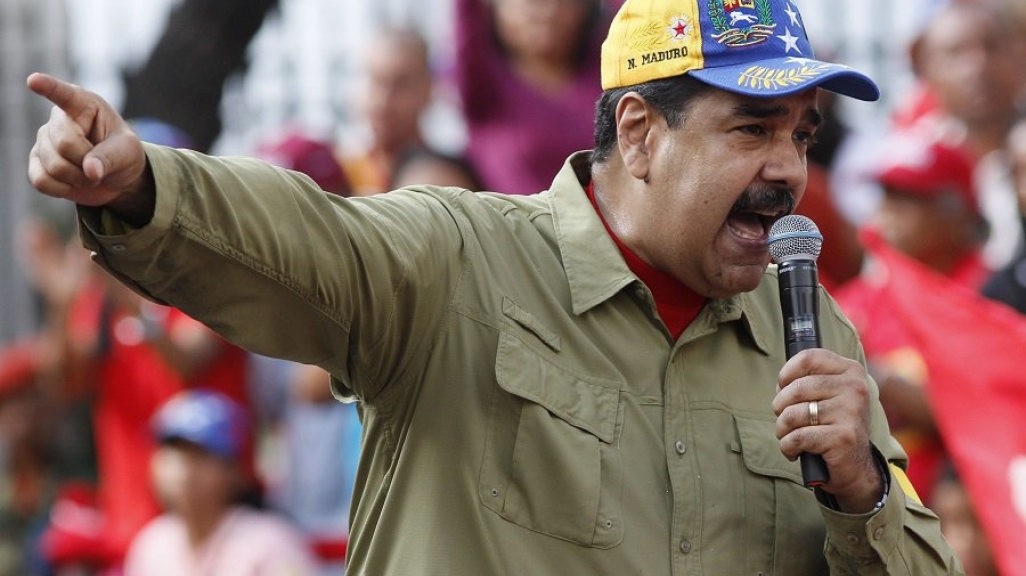 Update: What Is Happening with Venezuela's Presidential Election?

Venezuela is holding presidential elections, but they’ll be far from free and fair.

Update: The Venezuelan National Electoral Council pushed back the election from April 22 to May 20 after an agreement between the Maduro administration and some opposition parties.

Venezuela is holding presidential elections, but they’ll be a long way from free and fair. The four biggest opposition parties are boycotting the election. Two are also barred from running candidates. On February 21, President Nicolás Maduro upped the ante by proposing “mega-elections” for more than 2,300 posts—including early elections for the legislature, governorships, and municipal posts—on the same day.

1. The snap elections were decided unilaterally.

The government was in the middle of internationally mediated dialogue with the opposition when the controversial Constituent Assembly voted on January 20 that presidential elections must be held by the end of April 2018. The body, considered illegitimate by the opposition and the international community, has usurped the powers of Venezuela’s legislature, the National Assembly—the only branch of power controlled by the opposition. On February 7, the Maduro administration originally set the election date for April 22 without acknowledging, much less agreeing to, any of the opposition’s demands. The move effectively ended the talks in the Dominican Republic.

In the negotiations, the opposition had sought guarantees on the terms of such an election before agreeing to a date, including freeing political prisoners like Leopoldo López (a presidential aspirant), replacing several chavista members of the National Electoral Council (CNE) with apolitical ones, restoring the right of Venezuelans abroad to vote, and restoring the National Assembly’s constitutional powers. When the latest round of negotiations kicked off in December, international observers (including ones from Bolivia, Nicaragua, and Saint Vincent and the Grenadines chosen by the Maduro government) had recommended the elections take place in the latter part of the year.

2. The accelerated timing favors the government.

Neither the Venezuelan Constitution of 1999 nor electoral law lays out a regular schedule for when the presidential elections are to take place. Instead, it just lays out that the next president must be sworn in on January 10, 2019. The three most recent regular presidential elections took place in the months of July, October, and December of the years prior to inaugurations. In 2012, the CNE set the presidential election with six months’ notice. But, in 2018, parties and candidates have less than 90 days to prepare. Voters had less than two weeks from the announcement to update their registration. One opposition leader called the accelerated timeline “an ambush.”

If the presidential elections are happening several months early, Maduro’s proposal of mega-elections would move up voting for some posts by years. Voters elected the current National Assembly to five-year terms in December 2015. Elections for four-year governorships took place in October 2017 after being delayed for almost a year, and municipal elections (also to four-year terms) took place in December that year.

3. The opposition faces a no-win choice.

The opposition has been divided most pointedly on the question of whether or not to participate in elections that give the government an impossible edge and also that put the livelihood of opposition candidates, their families, and voters (especially ones employed by the state) at risk of intimidation, prison, and more in the middle of an economic crisis. Workers at state oil firm PDVSA received a notice on February 20 that they are only permitted to follow approved government accounts on social media or face disciplinary actions and/or firing. Almost half of Venezuelans depend on a new government ID system for what little food they get, and the threat of not getting that food if they vote against the government in an election is ever-present under an increasingly authoritarian regime. What paltry foodstuffs the government hands out are more necessary than ever: two-thirds of Venezuelans lost weight in 2017, an average of 24 pounds. The year prior, more than 70 percent lost an average of 19 pounds.

On the political front, while no election since Hugo Chávez first came to power in 1999 has been easy for the opposition, the last three years have been demoralizing. The opposition won a landslide in December 2015 legislative elections, only to see the CNE invalidate their supermajority of seats and the Supreme Court overturn every one of the new Assembly’s resolutions. A vote in July 2017 to elect representatives to the Constituent Assembly led Smartmatic—the company that built its reputation providing voting machines for Venezuelan elections—to go public with a statement calling the number of voters the CNE said participated “manipulated” upward by at least 1 million votes. One of the CNE’s five rectors went public with evidence of procedural irregularities that he said invalidated the entire vote. “What occurred [on July 30] is very serious,” said Luis Rondón the day after the vote. “It weakens our values, and creates a precedent that must not be repeated in any other electoral process.”

In October, five days before gubernatorial elections, the CNE announced it was moving the permanent polling stations for an estimated 312,000 voters, moreover, at locations where the MUD won 245,000 of votes cast in the previous legislative elections. The CNE certified chavista wins in 18 of 23 states on Election Day, despite polls and analyses showing that the opposition could have won as many as 19 seats with normal turnout and no interference. One of the few governorships the opposition won, the state of Zulia, it promptly had taken away, after Justice First candidate Juan Pablo Guanipa refused to take the oath of office before the Constituent Assembly in protest of the body, and a chavista-friendly legislative committee subsequently declared his seat vacant.

Then there’s a question of voter turnout: 40 percent of opposition supporters said they were “very sure” they’d head to the polls, compared to 80 percent of government backers, according to a February Venebarometro poll. Venezuela has one of the highest turnout rates in Latin America, especially for a country without mandatory voting. Turnout in the last three Venezuelan presidential elections was over 70 percent nationwide.

4. Where does this leave the opposition?

The four largest parties in the opposition coalition, known as the Democratic Unity Roundtable, or MUD by its initials in Spanish, have come together to boycott the vote. Representatives from Justice First, Democratic Action, and the New Era parties said they were aligning themselves with Popular Will, the party of López. The CNE had previously banned Popular Will and Justice First from running candidates. Along with López, who is under house arrest, opposition figures Henrique Capriles and María Corina Machado are also banned individually from running. Of note: the three are the most-followed Venezuelan opposition leaders on Twitter.

Maduro’s lone serious opposition challenger so far looks to be Henri Falcón, 56, a one-time member of Chávez’s student movement who broke from the chavista ranks in 2010 while governor of the Lara state. Though he hasn’t officially declared his candidacy for the Progressive Advance party, Falcón tweeted Wednesday, “Nicolás, I’m going to defeat you and your traps with everything I have.” Falcón’s message focuses on the need for consensus building in the name of stability in the eventual aftermath of the Maduro presidency, and he regularly differs with other members of the more hardline factions within the MUD leadership who are less inclined to work with the ruling party.

Analysts are divided on Falcón’s chances, but the basic line of thinking is that the election is winnable for the opposition if voters turn out and vote. Others, however, say that the conditions for a free and fair vote are so far gone that the question is irrelevant. In the same Venebarometro poll, when asked who among six opposition candidates should be Venezuela’s next president (not including Capriles and López), Falcón came out on top with 14 percent, while 62 percent of people chose nobody.