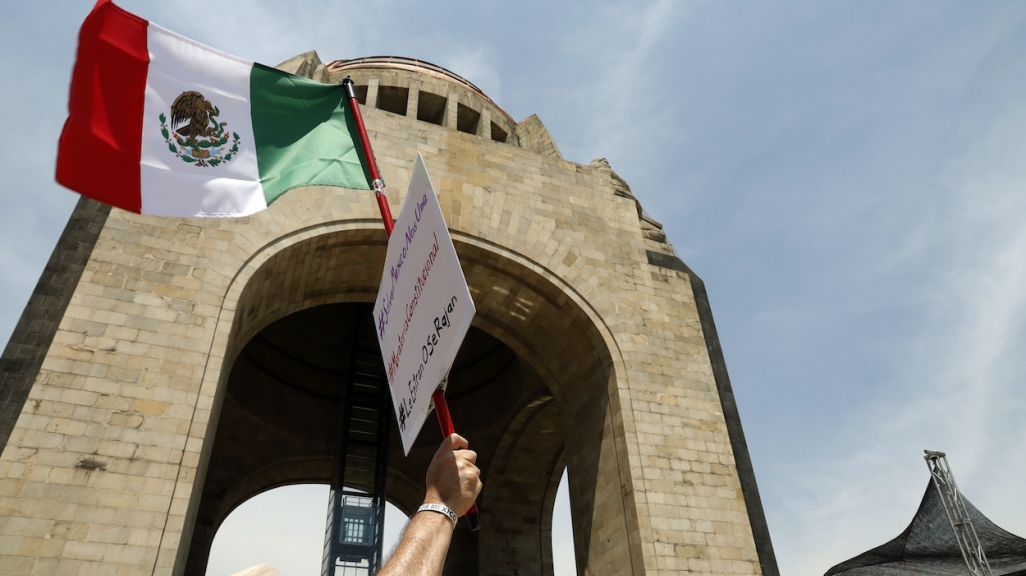 A protester in Mexico. (AP)

The editor-in-chief of AS/COA Online covers the connections between the April 10 presidential recall referendum, energy and electoral reforms, and U.S.-Mexico ties.

Why is Mexico holding a presidential recall vote to determine whether Andrés Manuel López Obrador, known as AMLO, should complete his term? What’s at stake when it comes to recent legislative rulings and reforms in the energy sector? How do the reforms relate to Mexico’s trade agreement with the United States and Canada? AS/COA Online Editor-in-Chief Carin Zissis connects the dots, saying: “The bigger the [recall] turnout, the more momentum it gives AMLO when it comes to his legislative and political goals.”

AS/COA Online: There’s a lot going on in Mexico these days, including the presidential recall vote on April 10 that determines whether López Obrador will complete his mandate through 2024.

What can you tell us about that vote and how are things shaping up as the referendum nears?

Carin Zissis: Since before he even began his presidency, López Obrador has been promising to give voters the opportunity to decide whether he would be able to continue his mandate all the way through to the end of his term. At first, he wanted the vote to take place at the same time as the midterms last year. Instead, what’s known as the revocación de mandato is happening this coming Sunday, April 10, which also happens to be Palm Sunday.

Now, the referendum is challenging and costly, and it involved getting millions of signatures to hold this vote, so some have asked, “Why hold it?” After all, AMLO is a popular president, so it’s unlikely he’ll be unseated. If you check our own approval tracker, you can see that, overall, he has an approval of 58 percent. When it comes to this referendum, a poll published this month by El Financiero found that 57 percent of respondents said AMLO should continue with his mandate. And it’s more likely that people who support AMLO will turn up to vote than those who don’t, given that his opponents are boycotting the recall.

So, why bother? Well, the case has been made that it sets a precedent. If there is a future president who is unpopular or corrupt, voters could call a recall to cut short such a leader’s six-year term.

In this case, the recall serves as a way to show support for the president. A large number of members of his party have been penalized by the electoral agency as they’ve gone out to call on people to vote in hopes of a large turnout. In order for the vote to be binding, 40 percent of the electorate must participate. But, aside from that, the bigger the turnout, the more momentum it gives AMLO when it comes to his legislative and political goals. Mexico's last referendum, which was held last summer in August, had a turnout of 7 percent. So reaching that 40 percent goal to make the result binding could be tough, particularly because, as I noted, it’s the start of Easter week.

But we’ll see on Sunday what happens.

LatAm in Focus: Why Is Mexico Holding a Presidential Recall Vote?

All signs point to Andrés Manuel López Obrador staying in power after the April 10 referendum on his mandate. So why hold it? Gatopardo’s Fernanda Caso explains the debate over the recall.

AS/COA Online: There are some big legislative moves in the works, including an electoral reform and an electricity reform.

Zissis: Yes, at the same time that we’re having this recall vote in Mexico, there are some important reforms coming up.

In recent days, the president promised to introduce an electoral reform right after the recall that could see major changes to the country’s electoral institutions, notably in how members of both the electoral agency, or INE, and the electoral tribunal, the TEPFJ, get selected. He also said the reform would seek to reduce the number of legislators in Congress. That’s another reason that what happens with the recall is important. If more people turn out to support AMLO, it gives momentum to an electoral reform like that one. For months now, even back to last year’s midterm elections and before, AMLO has been in a kind of battle with the electoral agencies, so the reform would be a way for him to reshape these institutions.

It’s worth noting that polling shows that the INE is one of Mexico’s most trusted institutions. It’s no small thing to make changes to how it functions.

At the same time, we have an electricity reform that is being negotiated right now in Congress that would take a statist approach to Mexico’s electricity sector and would, among other things, give the state electricity firm, known as the CFE, majority control over the market. This would be a landmark reform for AMLO’s political movement and energy agenda. However, it’s not clear it has the votes. The opposition has introduced measures so perhaps a compromise will be reached, though AMLO has said he would not change even a comma of the reform.

AS/COA Online: On April 7, Mexico's Supreme Court delivered a ruling on a stalled 2021 electricity law, in which there were not enough votes to deem it unconstitutional. What does that mean and how does it fit in this picture?

Zissis: At the same time that this reform is happening in Congress, Mexico’s Supreme Court ruled on a law that predated this reform. The law also hands the CFE greater control over the electricity sector, giving it priority over private firms when it comes to energy generation. The law had not been implemented as it was stalled by litigation.

Now, the Supreme Court didn’t get the supermajority of votes needed to make the law unconstitutional, meaning that 8 out of 11 votes were needed, but only seven court ministers ruled that way. As such, the law ends up being in a strange space. Because most ministers voted against core articles in it but not enough voted to suspend it overall, AMLO can claim a win because a key piece of statist energy legislation will stand. But private companies—particularly those that have made major investments in renewables—will still be able to present legal challenges against the law. After the court’s ruling, U.S. Ambassador to Mexico Ken Salazar released a statement warning that it would result in “endless litigation.”

AS/COA Online: Given how tightly interconnected U.S-Mexican economies are, what do these legislative moves mean for bilateral relations?

Zissis: In recent days, U.S. Trade Representative Katherine Tai sent a letter to Mexico’s economy secretary warning about both this law and the reform, saying that the policies put $10 billion of U.S. investment at risk and cautioning that if a solution is not found, the United States could takes steps to use USMCA mechanisms.

At the same time, there have been a number of really high-level meetings. U.S. Special Presidential Envoy for Climate John Kerry travelled recently to Mexico for the third time in less than half a year to meet with AMLO and leaders from the energy sector. So, there’s much for the two countries to work through on this matter.

At the same time that all of this is happening, Mexico’s position on Russia’s invasion of Ukraine is coming into question. On April 7, Mexico abstained from a vote to suspended Russia from the UN Human Rights Council. There’s been some mixed messaging in terms of Mexico’s stance as it’s ranged from the foreign minister condemning Russia’s invasion to the president being reluctant to condemn Vladimir Putin. AMLO has argued against taking a strong position, saying Mexico practices non-interventionism. He is also known for saying that the best foreign policy is domestic policy. As such, he has focused much of his attention on messaging at home.