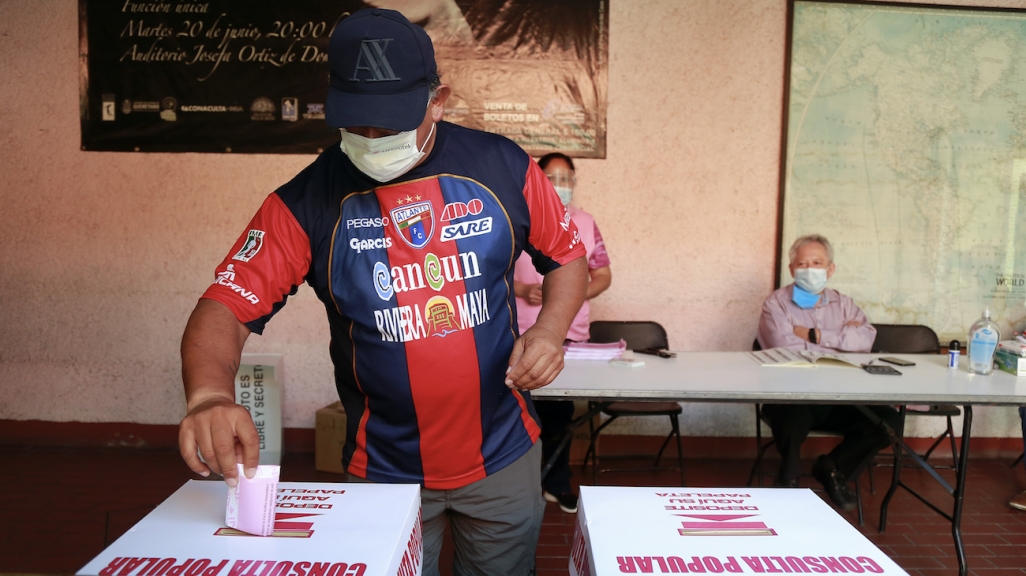 A voter in a Mexican referendum. (AP)

LatAm in Focus: Why Is Mexico Holding a Presidential Recall Vote?

All signs point to Andrés Manuel López Obrador staying in power after the April 10 referendum on his mandate. So why hold it? Gatopardo’s Fernanda Caso explains the debate over the recall.

In Mexico, presidents serve one, long six-year term known as a sexenio, and they don't seek reelection. That's still true, but now there's a bit of an adjustment.

Since before he took office in 2018, Mexican President Andrés Manuel López Obrador, or AMLO, has been promising that his country's citizens would get to evaluate his leadership by voting in a recall referendum on whether he should finish out his term. With just over half of the sexenio done, voters will get to do just that on April 10.

It's taken a good deal of effort to get here, from a constitutional reform to gathering millions of signatures to hold the recall. So why are some people calling for a boycott?

"The first strange fact about the vote is that the people who are organizing it are people who like the president," said journalist, lawyer, and political analyst Fernanda Caso to AS/COA Online's Carin Zissis. "You would think that in a recall it would be the opposition who would ask for it." In fact, Caso explains, his opponents don't even necessarily want him voted out, given that AMLO's party, Morena, holds the largest number of seats in Congress and would get to select the interim leader if he was recalled. Moreover, with an approval rating hovering near 60 percent and an expectation that his supporters will be the ones showing up to cast ballots, it's highly unlikely we'll see his term cut short.

There's still the matter of the cost. The National Electoral Institute, known as the INE, has been budgeted $77 million to hold the recall-a total that's roughly 40 percent of what the agency estimated it would need. The INE says that means there will be fewer voting booths. AMLO says the INE is trying to hide voting sites' locations. Such tension between the agency and the president are par for the course, given that López Obrador has called for reforms that would see the autonomous INE absorbed into a ministry.

Caso, who served as a representative to the INE for Mexico's first independent presidential candidate Margarita Zavala, says, "Of course, I think the INE has the most to lose in this recall." On the other hand, the Gatopardo podcast host and head of political portal Latitud 3°12 adds that much depends on how things go on the day of the referendum. If turnout is low and the process efficient, the president's suggestions that the electoral agency sought to suppress the vote will ring hollow.

Turnout could well be low. A February El Financiero poll found that 52 percent of Mexicans don't see the recall as necessary. AMLO said he'll recognize the recall results, even if 40 percent of the electorate, the minimum needed for the outcome to be binding, don't show.

And therein lies a question: If interest runs low and the results seem a foregone conclusion, why make the effort and spend the money to hold it? Aside from cementing a record of his popularity, there's the matter of building momentum for upcoming reforms, as well the 2024 presidential vote in which Morena will seek to continue AMLO's political project.

"He's measuring his political allies," says Caso. "The people who want to be the next candidate from his party are [making] big efforts to show him that they have the muscle to bring people out."

New to the podcast? Check out past episodes of Latin America in Focus and subscribe on Amazon, Apple, Google, SoundCloud, Spotify, and Stitcher.