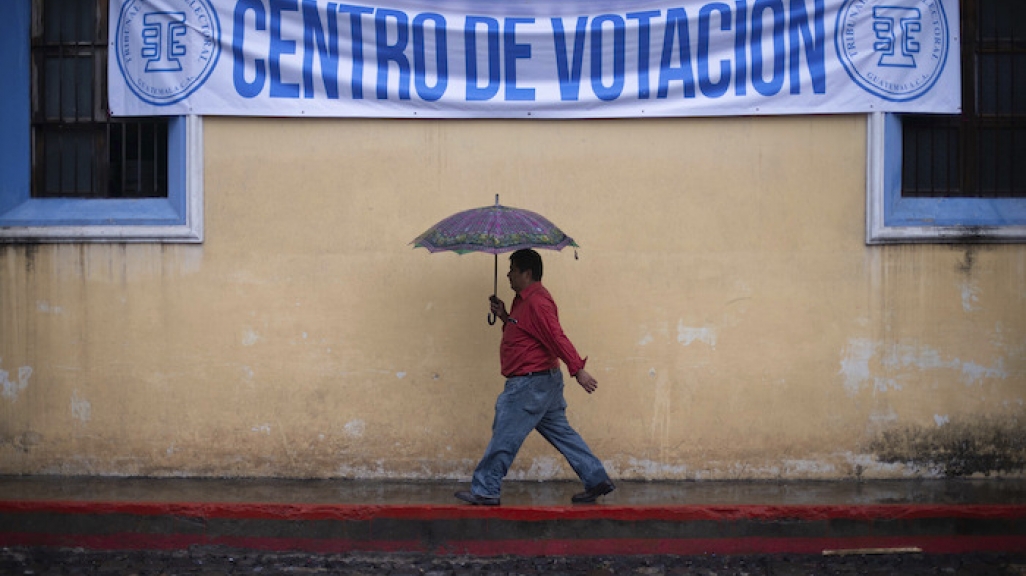 A voting center in Guatemala. (AP)

3 Things to Know ahead of Guatemala's Presidential Runoff

Sandra Torres and Alejandro Giammattei will face off in an August 11 runoff with an expected low voter turnout and amid an immigration deal with Washington.

Updated August 7, 2019—Guatemala is getting close to decision day. Center-left candidate Sandra Torres of the National Unity of Hope (UNE) party and Alejandro Giammattei of conservative Let’s Go (VAMOS) face off in an August 11 runoff after neither candidate secured more than 50 percent of the vote in June 16 general elections. Although Torres earned nearly 26 percent of the vote compared to Giammattei’s 14 percent in the first round, polling puts Giammattei 7 points ahead of her in the lead-up to Sunday’s vote.

As Guatemalans head to the polls, here are three things to know ahead of the second round.

Out of the 33 percent who said they would not vote in the second round, more than 3 in 10 voters said it was because they don’t consider either candidate to be “adequate.” The CID-Gallup poll shows stronger voter rejection of Torres, with 38 percent of voters saying they have a “bad” or “very bad” opinion of the former first lady, compared to less than 14 percent in Giammattei’s case. Although Torres won the largest vote share during the general election, a larger portion of voters has consistently held an unfavorable opinion of the three-time candidate—who also divorced then-President Álvaro Colom in 2011 in a rejected bid to run that year as well—compared to the other contenders. Fourth-time candidate Giammattei’s approval rate among voters has steadily been higher than that of Torres, ahead of both the general election and the runoff.

Torres, who lost to current President Jimmy Morales in the 2015 runoff, tends to poll better with rural voters, while Giammattei polls better with urban voters.

2. An immigration deal ahead of election day

On July 26, U.S. President Donald Trump announced that, after months of negotiating and threatening to slap tariffs on Guatemala, Washington reached an agreement with Guatemala. Morales has resisted calling the deal a “safe third country” agreement, despite the White House calling it just that. The document itself does not include the term. But, terms aside, the pact functions in a similar manner to such an agreement, given that migrants who pass through Guatemala on their way north would be ineligible to request asylum in the United States under the agreement. Instead, these migrants would be required to request asylum in Guatemala.

Acting U.S. Homeland Security Secretary Kevin McAleenan traveled to Guatemala, where he met with Torres and Giammattei on July 31. The following day, he met and signed a cooperation agreement with Morales and his foreign and interior ministers. It is still unclear whether or not the “safe third country” deal will successfully go into effect as Guatemala’s Constitutional Court previously ruled that any such agreement would have to be approved by Congress prior to signing, which did not occur.

Both candidates expressed their concerns about the deal. Torres referenced the country’s poverty and malnutrition crisis and called on the deal to be put before Congress for a vote on ratification. While Giammattei pointed out that neither government has outlined a clear way to implement the agreement, the candidate also asked to be included in future discussions.

Runoff polling shows insecurity as the biggest concern among voters in this round, despite a marked decrease in the homicide rate since 2009. Fears about crimes stemming from gang activity, along with high poverty and malnutrition rates, have led to emigration. In 2018, nearly 117,000 Guatemalans were apprehended at the U.S. border, making it the country with the highest rates of emigration toward the United States out of the Northern Triangle countries, and Mexico deported another 44,000 Guatemalans from its territory that year. The country’s high insecurity is among the reasons many Guatemalans oppose the immigration deal with the United States, citing their country’s inability to keep its own population safe.

Corruption—a key issue during the 2015 election and the June general election— stands as the number three problem voters identified, behind unemployment and tied with high cost of living. Morales, a former comedian who ran in 2015 as an outsider under the slogan “Neither corrupt, nor a thief”—currently has immunity from prosecution as president but was implicated in a scandal following an investigation by the UN’s International Commission against Impunity in Guatemala (CICIG) into illicit campaign financing. After CICIG, which was also instrumental in the resignation of scandal-plagued President Otto Pérez Molina (2012–2015), turned its sights on Morales, the president tried to forcefully discontinue the agency’s work but was blocked by Guatemala’s Constitutional Court. Morales, who is term-limited and will likely leave office with one of the lowest approval ratings in the Western Hemisphere, did announce that he would not renew the CICIG’s mandate, which is set to expire September 3. The fate of the commission remains unknown, as neither presidential contender has explicitly backed saving it once sworn in as president on January 14, 2020.