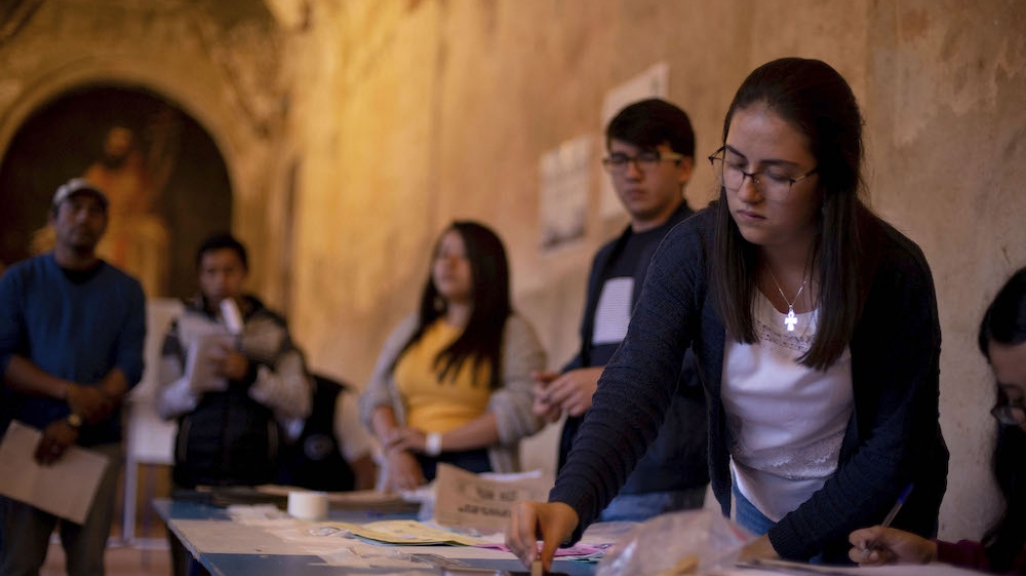 Guatemala Update: Torres and Giammattei Head to a Runoff

The former first lady will face an ex-prison director in a second-round vote on August 11.

On Sunday, Guatemalans voted to elect a new president, all 160 seats in the unicameral Congress, and 340 municipal mayors. None of the 19 candidates in the running for president received more than 50 percent of the vote. With 91 percent of votes counted as of 9:30 a.m. ET, the top two candidates will face off in the August 11 runoff: former first lady Sandra Torres of the center-left National Unity of Hope (UNE) party, who so far has 25.3 percent of ballots, and four-time presidential contender Alejandro Giammattei of the conservative Let’s Go (VAMOS) party with 14 percent.

With a series of legal rulings barring leading candidates less than a month out from the vote, along with death threats and corruption scandals embroiling others, a Prensa Libre article published days before the election showed nearly half of Guatemalans as still undecided. As such, blank and spoiled protest votes were of concern, given that, due to an electoral reform, they could have forced a revote if they amounted to more than 50 percent of ballots cast. Null and blank votes came in at 13 percent, compared to 9 percent in the last election.

And though election day proceedings were largely smooth, two towns suspended voting and concerns existed about voter intimidation. Moreover, torrential rains affected some areas. Those factors, plus uncertainty over what candidate to choose, may have contributed to a turnout of 58.6 percent—lower than the roughly 70 percent of the last two elections.

While Torres, a second-time candidate, held a comfortable lead in polls ahead of June 16, Gallup projected a win for opposition candidates in head-to-head scenarios against the former first lady.

The UNE candidate has strong name recognition, given her bids for the presidency started in 2011 when, as a first lady, she divorced President Álvaro Colom in order to legally run—though she was ultimately barred. Then, in the 2015 election, Torres lost in the runoff.

However, her unfavorables are by far the highest of the contenders, due in part to allegations of illicit campaign financing during her first campaign. Torres’ current candidacy gives her immunity from further investigations.

Her rival has his own baggage. Giammattei, a surgeon, is tied to a series of extrajudicial deaths that took place during his time as director of Guatemala’s prison system from 2004 to 2008. After 10 months in pre-trial detention and investigations brought forth by the country’s attorney general and the UN’s International Commission against Impunity in Guatemala (CICIG), a judge threw out the case due to lack of evidence. He also has name recognition going for him, given that this round amounted to his fourth run for president.

To beat Torres, Guammattei would need to pull the support of conservative voters who backed the Humanist Party’s Edmond Mulet (11 percent) and the National Progressive Party’s Roberto Arzú. Though third in polls, the son of former President Álvaro Arzú placed fifth with 6.2 percent, having been surpassed by Thelma Cabrera of the new Movement of Liberation of the People. Cabrera was only the second indigenous woman to ever run for president in Guatemala and represents the country’s campesino organization known as Codeca. Given 40 percent of the country is indigenous, her support base, which accounted for another 10.5 percent of ballots, may be the key to runoff success for Torres, who polls better with rural voters.

Though voters are more worried about unemployment and security in the country, corruption issues dominated the headlines this electoral round, as they did during the last round, when President Otto Pérez Molina resigned just days before the election. Championing the slogan that he was “neither corrupt, nor a thief,” Jimmy Morales, a former actor seen as a political outsider, won the 2015 runoff by a landslide. He started his presidency with 71 approval in January 2016.

But scandals involving his family and an investigation into his own use of campaign funds have left the president with 19 percent approval on his way out. Earlier this month, Consulta Mitofsky’s international ranking of presidential approval ratings put Morales near the bottom of heads of state in the Western Hemisphere: second to last ahead of Venezuela’s Nicolás Maduro.

The survival of the corruption-fighting CICIG has marked the campaign, especially given that the Electoral Tribunal ruled against former Attorney General Thelma Aldana’s ability to run. Though 72 percent of Guatemalans approve of the UN body’s work in the country—which has identified some 60 criminal organizations and led to 300 convictions since 2007—several leading candidates positioned themselves against it. In January, the Morales administration opted to discontinue the CICIG, which will be out of commission starting September 3.

Corruption was also a common theme in the election of the 160-member Congress, where 20 percent of deputies faced corruption charges. So far Torres’ party has garned the most votes there as well. Mayoralities and legislative seats may also proceed to the August 11 runoff. Both the new Congress and new president will take office January 14, 2020.