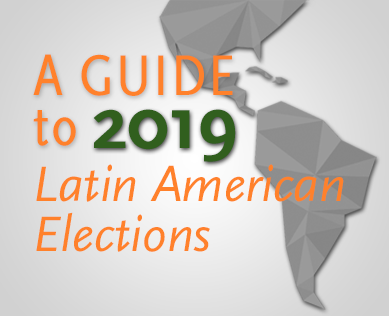 On June 16, some 7.6 million Guatemalans were eligible to vote for president, vice president, the entire 160-seat Congress, and 340 mayors. After a race that saw multiple top-tier candidates eliminated via questionable court decisions, voters had to choose between former First Lady Sandra Torres and ex-penitentiary director Alejandro Giammattei in an August 11 runoff. Turnout hit just 42 percent during the second round, which Giammattei—a four-time candidate who came in second to Torres in the first round—won with 58 percent of the vote.

On January 14, 2020, Giammattei will take the reins from Jimmy Morales, a former comedian who won in 2015 by making anti-corruption pledges. Instead, his government found itself tainted by corruption allegations and witnessed the end of the UN’s International Commission against Impunity in Guatemala—or CICIG. Morales now has one of the lowest approval ratings in the Americas.

Guatemalan presidents can only serve a single four-year term.

>> Find out about other elections in our main 2019 Election Guide.

Alejandro Giammattei leads Sandra Torres in polling ahead of the August 11 runoff to replace Jimmy Morales.

3 Things to Know ahead of Guatemala's Presidential Runoff

Sandra Torres and Alejandro Giammattei will face off in an August 11 runoff with an expected low voter turnout and amid an immigration deal with Washington.

Guatemala Update: Torres and Giammattei Head to a Runoff

The former first lady will face an ex-prison director in a second-round vote on August 11.

With the first-round vote slated for June 16, here’s a look at what’s at stake and who’s still in the running.

Sandra Torres has a healthy lead in polling ahead of the June 16 general elections, but she shouldn't rest easy.

LatAm in Focus: Who's In and Who's Out in Guatemala's Presidential Race

Political scientist Marielos Chang explains why Sandra Torres is the candidate to beat, though her win is not a sure bet. The first-round vote takes place June 16.

Two months out from Guatemala's election, it's still unclear who will be allowed on the ballot.

All Eyes on Guatemala as Crisis Brews Ahead of Elections

President Jimmy Morales' maneuvering against Guatemala's institutions could give the U.S. a chance to recalibrate its policy.

Could This Prosecutor Become Guatemala's Next President?

Thelma Aldana made her mark in Guatemala’s fight against corruption. Is she ready for politics?

5 Ways the Guatemalan Government Is Trying to Dismantle CICIG

A closer look at the offensive against the UN anti-corruption body operating in Guatemala.