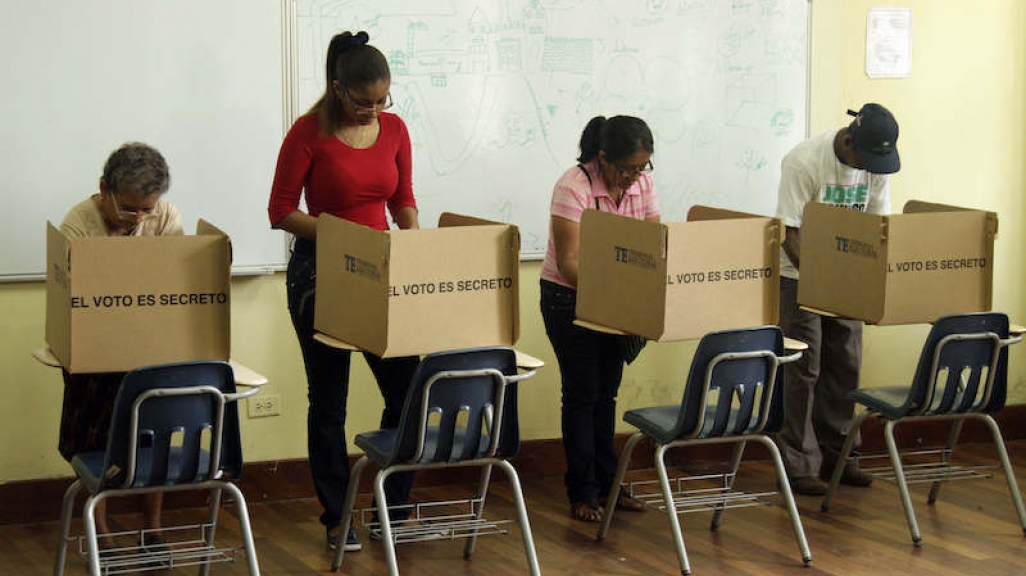 Updated, March 21, 2019 — Though the dust from last year’s electoral juggernaut in Latin America has barely settled, the region is gearing up once again for a full year of elections. Six countries in Central and South America elect new presidents in 2019. Elsewhere in the Americas, Justin Trudeau will be vying for a second term as prime minister when Canada holds federal elections on October 21. Additionally, Guyana—which is on track to surpass Mexico and Venezuela to become Latin America’s second-largest oil producer in the coming decade—will also hold general elections in 2019 at a still-to-be-determined date after the government of David Granger lost a no-confidence vote in December.

Here, we preview the Latin American presidential votes to come in 2019.

1. El Salvador
First round: February 3
Second round: March 10
Win threshold: 50% plus one
Length of term: 5 years

Carrying the outsider torch in El Salvador’s elections is poll leader Nayib Bukele, the former mayor of San Salvador. Bukele was first elected as a member of the traditional leftist Farabundo Martí National Liberation Front (FMLN), which kicked him out in 2017 when he capped off mounting tensions with the party by verbally abusing a local councilwoman. Bukele is now running on the Grand Alliance for National Unity (GANA) ticket, an alliance made after the elections board failed to certify his party for the 2019 races.

Bukele’s closest challenger is businessman Carlos Calleja of the establishment right-wing party, the Nationalist Republican Alliance (ARENA). While Calleja is bolstered by support from the traditional political machinery, Bukele is proving to be more adept at social media. Some polls even show Bukele with a decent chance of winning the election outright on the February 3 first round.

The loss of Bukele from the FMLN’s ranks along with President Salvador Sánchez Cerén’s unpopularity have diminished the party’s clout, and it lost key seats in last year’s legislative and municipal elections. Former Foreign Minister Hugo Martínez is running on the FMLN presidential ticket in 2019. The four-candidate field is rounded out by Let’s Go (VAMOS) candidate Josué Alvarado, a businessman who at one point was an undocumented immigrant in the United States after fleeing two attempts on his life in his home country.

While its economy is remarkably steady, Panama’s political scenario is proving to be much more uneven.

Stirring the pot is Ricardo Martinelli, who was president of Panama from 2009 to 2014. Martinelli is on the ballot again in 2019—even though he’s behind bars. He’s running for a seat in Congress and also is vying to run as an independent for mayor of Panama City, as well as potentially ending up on the ballot as a vice presidential candidate for the Democratic Change’s (CD) Rómulo Roux.** After being extradited from the United States in 2018, Martinelli was jailed and is awaiting trial on charges of using public money to spy on political rivals. His two sons are also fighting extradition from Miami on money-laundering charges in connection with the disgraced Brazilian construction firm Odebrecht. Roux, an attorney who had a private practice before Martinelli named him minister of canal affairs and later foreign minister, is polling in second in the few polls available.

The qualified presidential favorite at the moment is Laurentino “Nito” Cortizo, of the opposition torrijista Democratic Revolutionary Party. Cortizo served two terms as a congressman and for one year as president of the National Assembly. He later was named agriculture minister but resigned after 15 months over, he says, objections he had to U.S. demands in negotiations over the countries’ bilateral free-trade agreement. Running on the ruling Panameñista Party ticket and a distant third is José Isabel Blandón, a former congressman and mayor of Panama City. Blandón’s father was a top General Manuel Noriega aide who eventually defected and testified against the general in 1988, in large part to win back the approval of his son, who was a 20-year-old law student at the time.

Panama’s electoral body will certify the slate of independent candidates by January 11. The Constitution allows for nonconsecutive presidential reelection, but the executive must sit out for two terms before running again for the role. Campaigning will begin March 4 and last through May 2.

In 2015, while the La Línea scandal swirled, Jimmy Morales, a comedian who’d never held public office, won Guatemala’s presidency on the infamous slogan of “not a thief, nor a crook.” Four years later, Morales finds himself in a constitutional showdown with the UN-backed anticorruption body, known as the CICIG, as Guatemala turns back to politics as usual.

As such, the 2019 candidate field contains many familiar faces: Leading early polls is former Attorney General, anticorruption leader, and Morales opponent Thelma Aldana. Former First Lady Sandra Torres, who lost in a landslide to Morales in the 2015 runoff, is making her third bid for the presidency. Zury Ríos, daughter of the late dictator Efraín Ríos Montt, is running for a second time, this time representing the Values (Valor) party. Alejandro Giammattei of the Let’s Go (Vamos) party is making his fourth run. Rounding out the field are attorney José Guillermo Alfredo “Freddy” Cabrera of the Everybody (Todos) party and businessman Mauricio Radford, who heads the Strength (Fuerza) coalition.

4. Bolivia
First round: October 20
Second round: TBD, possibly in December
Win threshold: 50%, or 40% with a 10-point margin over closest competitor
Length of term: 5 years

Evo Morales is already Latin America’s longest-serving head of state—and he’s gunning to extend his mandate through 2025 by running for a controversial fourth term, in spite of a February 2016 referendum that rejected a proposal for indefinite reelection. But the Constitutional Court ruled the following year that the existing two-term limit was in fact unconstitutional on the grounds that term limits restrict human rights, a decision that paved the way for Morales and his longstanding vice president, Álvaro García Linera, to run for another term. In December 2018 and amid much legal uncertainty, the Supreme Court validated their candidacies on the 2019 Movement toward Socialism (MAS) ticket.

While Morales has benefitted for years of weak opposition, as the 2016 referendum indicated, Bolivians are increasingly frustrated with him and this election is a long way from a sure bet. In some polls, he even trails his main competitor, Carlos Mesa, who was president before Morales from 2003 to 2005. A mild-mannered former journalist and historian, Mesa has never won a national election at the top of the ticket, having only come to the presidency through succession after his predecessor resigned. Morales’ best chance is to win the first round outright and stave off a runoff. If he can’t do that, Mesa could lead by double-digits in a potential second round, according to one poll.

Morales and Mesa will be on the ballot during closed party primaries held on January 27, along with seven other challengers. In a coup for Mesa, the 2019 field will not include big names like Jorge “Tuto” Quiroga and Samuel Doria Medina, who each challenged Morales multiple times in past elections.

5. Argentina
First round: October 27
Second round: November 24
Win threshold: 45%, or 40% with a 10-point margin over closest competitor
Length of term: 4 years

President Mauricio Macri’s biggest challenger to a second term might not be another person, but an economic recession. The Argentine president has weathered a rough road trying to get the country back on its feet and in the good graces of international markets after more than a decade of kirchnerismo. Though his Let’s Change (Cambiemos) coalition fared better than expected in 2017 midterms, the country now finds itself hit with rising inflation and interest rates, and a contracting economy.

While the field is a long way from being determined, Macri will face a challenge from Salta Governor Juan Manuel Urtubey, who announced his candidacy on January 3. Urtubey is positioning himself as a centrist alternative in between the center-right pro-business Macri and the more traditional leftist Peronism of figures like Senator and ex-President Cristina Fernández de Kirchner, who’s currently under criminal investigation.

But before Urtubey can challenge Macri, he’ll likely have to first face his Justicialist Party colleague Sergio Massa in Argentina’s primaries, known as the PASO, which take place on August 11. Massa finished third in the last presidential elections. In a bid for the outsider vote, TV host and soccer club executive Marcelo Tinelli is also toying with a run for the Casa Rosada.

6. Uruguay
First round: October 27
Second round: November 24
Win threshold: 50% plus one
Length of term: 5 years

Uruguay’s race is one of the least defined at the moment, since parties will not choose their candidates until primaries on June 30. That said, the race is expected to come down to a contest between the candidates from the left’s Broad Front party and the right’s National Party, with the Broad Front having the slight edge in polls so far. Montevideo Mayor Daniel Martínez leads early surveys to head the Broad Front ticket, followed by Energy and Mining Minister Carolina Cosse, labor union organizer Óscar Andrade, and Central Bank President Mario Bergara. On the National Party side, Senator Luis Lacalle Pou, the runner-up to Tabaré Vázquez in 2014, has a healthy lead over his Senate colleague Jorge Larrañaga.

Though he would be eligible to run in 2019, former President José “Pepe” Mujica of the Broad Front ruled out in 2016 going for a second, nonconsecutive term.

*This piece has been updated to correct the win threshold in Panama as plurality, not 50 percent plus one.

**This piece also has been updated to update the status of Martinelli's candidacy for vice president as possible, not official, and to note his congressional and mayoral candidacies.