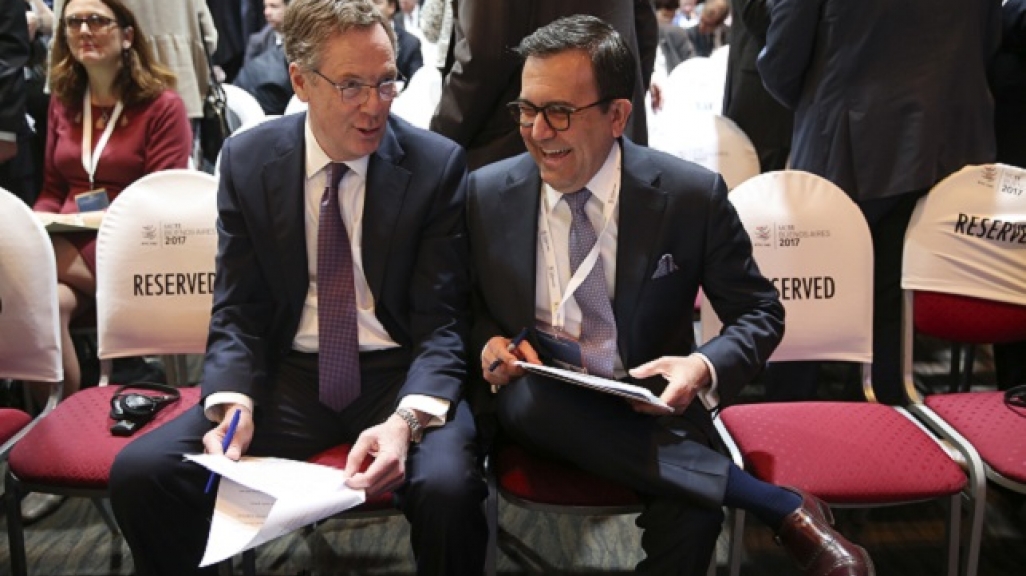 U.S. and Mexico Come to a NAFTA Agreement

On Monday—just over a year after the three members of the North American Free Trade Agreement opened talks to renegotiate the two-decades-old deal—Mexico and the United States announced they’d reached an agreement on their side. Notably absent was Canada; talks over the past month have been largely bilateral, which is the Trump administration’s preference.

After tweeting over the weekend that an agreement with Mexico was imminent, U.S. President Donald Trump tweeted on Monday morning there’d be news with Mexico that day. Meanwhile, Mexican President Enrique Peña Nieto tweeted that he’d spoken to Canadian Prime Minister Justin Trudeau and hoped to include Canada in the negotiations this same week.

In a phone call with Peña Nieto broadcast from the Oval Office, Trump did not talk about specific negotiating points, but did say he plans to change the name of NAFTA due to bad connotations while emphasizing the bilateral deal between the United States and Mexico. Peña Nieto, for his part, repeatedly reinserted Canada into the conversation and talked about reincorporating Ottawa into trilateral talks. In a departure from the past, Trump had only accolades for Peña Nieto—as well as President-elect Andrés Manuel López Obrador—complimenting the outgoing and incoming administrations on their collaboration.

Toward the end of the broadcast from the Oval Office, U.S. Trade Representative Robert Lighthizer confirmed to Trump that he would be submitting requisite 90-day notification of the deal to Capitol Hill, with the object of signing a final deal by the end of November, meaning before Mexico’s December 1 presidential inauguration. That said, according to former Mexican Ambassador to the U.S. Arturo Sarukhan, that 90-day timeframe only applies if the original trilateral deal is updated (i.e. if Ottawa signs on this week to the deal between Washington and Mexico City).

Still some digesting to do as to details of what #Mexico & US have agreed to in #NAFTA revamp. However, 1 line of interpration keeps popping up in some of the analysis out there: US & MX moving to finalize before Aug to bulletproof agreement vis a vis incoming MX government...1/3

... 3/3 Lobbying US Congress for passage of deal after signature will be hard enough as is. How quickly #Canada rejoins & whether they sign on to what has been negotiated & advance on other fronts will be key for this scenario to play out. TPA does NOT contemplate 2 bilat deals

Under current TPA, WH would not have authorization for 2 separate bilats. 90 day notification is to allow for signature. Congressional debate/approval would come after that. So, unless Canada rejoins, embraces what has been negiotated between MX & US & solves pending issues...1/2

After the call, the Office of the U.S. Trade Representative (USTR) released fact sheets, signaling among others key changes from the current NAFTA deal (detailed below). The incoming Mexican administration released a statement calling the day’s agreement “a positive development.”

Later that afternoon, Mexico’s negotiating team held a press conference from the embassy in Washington to explain their strategy going forward. Foreign Affairs Secretary Luis Videgaray emphasized that, irrespective of what happens in negotiations between Canada and the United States, Mexico will have deals secured with both countries, if not via the trilateral NAFTA then separately via today’s bilateral agreement with Washington and with Ottawa through the Trans-Pacific Partnership and Pacific Alliance. “The uncertainty is no longer if there will be a deal or not,” said Videgaray. “The uncertainty now is if the deal will be trilateral, as we want it to be, or bilateral.”

Upon news of the U.S.-Mexico agreement, Canadian Foreign Minister Chrystia Freeland cut short a trip to Europe to head to Washington to join in NAFTA talks.

What’s new from the original NAFTA

So what would change, per the bilateral deal? One big shift is the softening of the “sunset clause,” a previous U.S. demand that required NAFTA’s renegotiation every five years. Instead, Reuters reports that Mexico and the United States settled on a 16-year lifespan for NAFTA, plus a review every six years to extend the deal for another 16. On the sticky issue of Mexico’s low wages, the USTR says the new deal requires between 40 and 45 percent of auto content to be built by workers who earn at least $16 an hour. USTR also revealed increases to the rules of origin rate for auto content from 62.5 percent higher, so that 75 percent must be made in North America. In addition, Canada might have a hard time accepting the U.S.-Mexico decision to water down investor-state dispute settlement provisions for certain sectors.