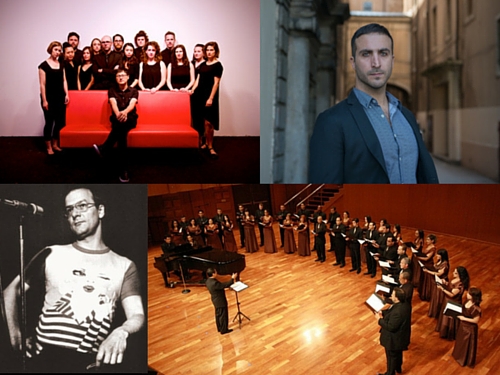 Québecois composer Claude Vivier remains one of the most enigmatic and little-performed composers of his generation. He studied with Stockhausen before traveling east to Indonesia, Japan, and Thailand, where he became immersed in the rhythms and traditional culture. New York City-based ensemble mise-en presents a portrait of the Canadian enigma, including several of his chamber works from the 1970s and 1980s.

We round out our series of early music events this season with a bit of Shakespeare: Canadian soprano Suzie LeBlanc joins harpsichordist Alexander Weimann for "As You Like It," early arias set to Shakespearean texts, in late April.

Puerto Rico's premier choral organization, Orfeón San Juan Bautista (OSJB), has offered more than a hundred concerts which regularly include premieres of works by contemporary Puerto Rican composers since its founding in 2001. The 42-member, mixed-voice ensemble had the chance to perform at Santa María de la Encarnación Metropolitan Cathedral, the oldest church in the Western Hemisphere, and in late April OSJB returns to New York to perform at Hispanic Society of America.

Brazilian composer Felipe Lara is currently in residence at Harvard's Radcliffe Institute for Advanced Study, and his electroacoustic compositions span over a decade. Musicians from International Contemporary Ensemble and JACK Quartet, along with violist Elizabeth Weisser, will perform a selection of Lara's solo and ensemble works at Americas Society.

Music of Americas returns to Dixon Place in collaboration with Centro de Experimentación del Teatro Colón and SuperUber for the U.S. premiere of multimedia monodrama Inteligencia Artificial, which juxtaposes man's temporality with the simultaneous universes of memory, data processing, and the enduring legacy of artificial intelligence, effectively establishing a distance between between the organic and artificial.

Six months into his term and amid the pandemic, the president's approval stands as high as 78 percent, per polls we examined.