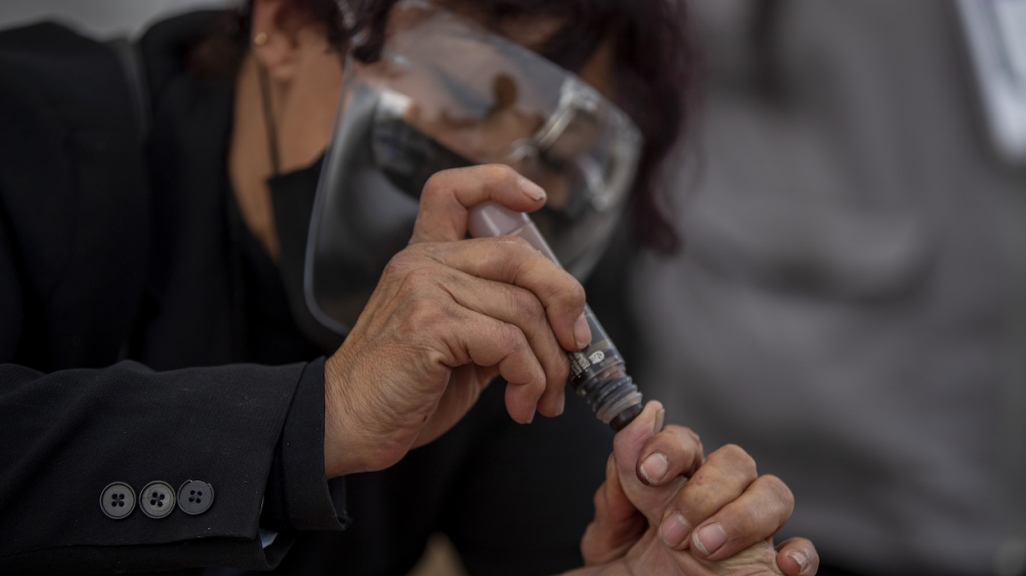 An election worker inks a voter's thumb in Mexico. (AP)

How did the referendum come to be? How will it work? What happens if the yes vote wins? How do Mexicans view the issue?

President Andrés Manuel López Obrador may be notorious for railing against the corrupt practices of Mexico’s past governments, but he’s also been known to advocate for forgiving the transgressions of his predecessors. To some degree, his “turn the other cheek” approach falls in line with a norm: Mexico’s ex-presidents do not have political immunity but, in practice, they don’t end up facing justice. Still, López Obrador—or AMLO—has professed that all Mexicans, not he alone, should decide whether to pursue allegations against their former leaders. Even before he took office after a 2018 win that had much to do with widespread discontent over corruption, AMLO said that “if the people ask for it,” ex-presidents would face investigation and possible prosecution for corruption and other crimes.

Voters will soon get that chance. An August 1 referendum lets them weigh in on whether to investigate every ex-president starting with Carlos Salinas de Gortari, who was elected in 1988. Still, there are a few hurdles in the process, including the referendum question itself. Critics say it’s too hard to decipher and The Economist described it as reading like a joke by the comedian Cantinflas. The question on the ballot will be: “Do you agree or not that pertinent actions be carried out, in accordance with the constitutional and legal framework, to undertake a process of clarification of political decisions taken in past years by political actors aimed at guaranteeing justice and the rights of possible victims?”

Here’s what you need to know about the August 1 referendum.

How did the referendum come to be?

While AMLO had long floated the idea of letting the public decide on the matter of presidential justice, getting a referendum on the books wasn’t a fast process. It required a constitutional reform that had to be ratified by a minimum of 17 out of Mexico’s 32 state legislatures, which took place in November 2019.

Then, fuel was added to the referendum fire in August 2020, when after getting extradited from Madrid, Emilio Lozoya, a former head of Mexico’s state oil firm PEMEX, leveled a slew of graft accusations against ex-presidents and ministers. Among those implicated in Lozoya’s 63-page statement was Enrique Peña Nieto, the man he once helped get elected to the country’s highest office, for a legislative vote-buying scheme linked to Latin America’s far-reaching Odebrecht scandal.

That same month, senators from AMLO’s party, Morena, initiated the process to call a referendum. On September 15, the president submitted the referendum question to the Senate and proposed scheduling the exercise for the same day as the June 2021 midterms. The original phrasing specifically named and called for investigating Salinas de Gortari, Ernesto Zedillo, Vicente Fox, Felipe Calderón, and Peña Nieto—five presidents whose terms covered the three decades before AMLO’s own and that he regularly derides as neoliberal. The list includes every living former president except 99-year-old Luis Echeverría, who was exonerated in 2009 for his role in the 1968 student massacre that took place while he was interior minister.

The Senate then turned the referendum over to the Supreme Court to analyze whether it was constitutional. One justice argued the referendum violated human rights and circumvented authorities’ obligation to investigate crimes by instead handing that role to the public. In a 6-5 vote, the high court deemed the referendum constitutional, but they modified the question’s language and stripped out the specific names.

With AMLO’s party holding a majority in both houses of Congress, the referendum won legislative approval in October 2020. Rather than timing it for the same day as midterm elections, the Chamber of Deputies set it for about two months later to adhere to the 2019 electoral reform that establishes the first Sunday in August for these types of votes.

How will it work?

This referendum is the first to be overseen by the country’s electoral agency, INE, as well as the first official one to be held on a national level. Prior referendums took place at a local or state level, while some organizations or political parties held national votes on their own accord.

During the transition period between his July 2018 win and his December 2018 inauguration, AMLO’s party held two referendums nationally: one on whether to continue a $13 billion airport project outside the capital and another that asked voters to weigh in on 10 different projects, ranging from an oil refinery to senior citizen pensions to youth scholarships. In the first case, the airport was canceled with about 1.2 percent of eligible voters participating. In the second, which saw all 10 projects approved, less than 1 percent took part.

But as an official national vote, this referendum must reach a turnout level of 40 percent to be considered binding—a tall order as voting is not compulsory. The June midterms saw about 53 percent of the electorate participate, which was a historically high level. Now, amid record contagion rates, a third coronavirus wave could dissuade voters from showing up. AMLO himself has said he will not participate but encouraged others to do so during a July press conference—a move that could be construed as a violation of election rules.

Moreover, no funding was set aside to cover the $26 million cost of the exercise. As such, a budget-constrained INE will use materials left over from the midterms. The number of voting centers in operation will be a third of those open in June.

What happens if the yes vote wins?

Even if the required 37.4 million Mexicans both show up to vote on August 1 and vote yes, the next steps remain unclear. After all, Mexico’s ex-presidents do not have immunity and can already face prosecution, even if no living president except Echeverría has done so. That could change given that the attorney general’s office already tied AMLO’s predecessor, Peña Nieto, to a legislative vote-buying scandal, thanks to Lozoya’s allegations. For now, Peña Nieto, believed to have taken up residence in Spain, celebrated his fifty-fifth birthday last week in freedom.

Some contend a win for the “yes” vote would encourage an end to the norms of allowing former presidents to retire peacefully, regardless of crimes committed while in office. Others suggest it could lead to the creation of a truth commission. Opponents say that even if the referendum sparked some form of judicial process, it would only tackle emblematic cases of the past and do little to attack the entrenched corruption that persists across Mexico’s government. AS/COA’s 2021 Capacity to Combat Corruption Index, released in June, saw Mexico drop three places to spot 11 out of 15 countries ranked.

How do Mexicans view the issue?

Responses at the highest levels have tended to fall along party lines, with Morena politicians on one side and the opposition on the other. Morena’s party president, Mario Delgado, said the referendum “is not a judicial process but a political one … in this transition to a true democracy.” Ex-President Fox unsurprisingly called it “the biggest nonsense in the world.”

The voters who do participate on August 1 are likely to check the “yes” box, given that Morena supporters are expected to turn out in high numbers. Moreover, a July 22 El Universal poll found that 89 percent of Mexicans think former presidents should face justice while 65 percent say it’s somewhat or very important to vote in the referendum. There may be a catch for AMLO, though: 72 percent think he should be investigated as well.