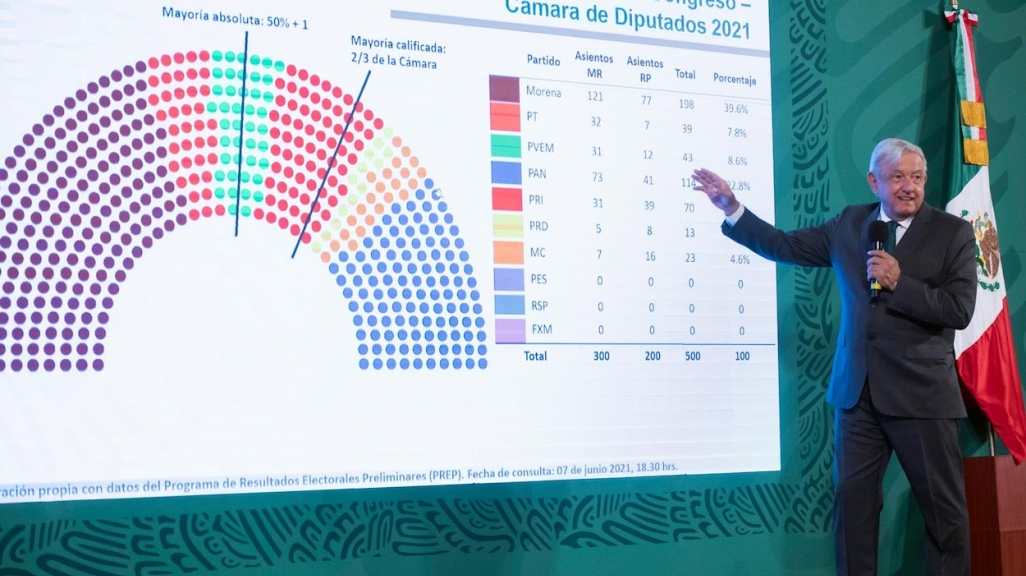 The AS/COA Online editor-in-chief shares insights on the surprising outcomes of the largest elections in the country's history.

After the June 6 midterm elections in Mexico, which were the largest in the history of the country, AS/COA Online Editor-in-Chief Carin Zissis explains why the results are seen as a referendum on President Andrés Manuel López Obrador’s first three years in power and what that means as eyes turn to the 2024 presidential elections. Preliminary results show his coalition losing a supermajority in the lower house of Congress, thereby limiting its ability to make deep structural changes. “While Morena will still be the party that holds the largest number of seats, it’s going to have to negotiate with the opposition in order to get what it wants,” says Zissis.

She also notes that there were positive developments in the midterms, despite a violent campaign season, with high turnout and close to 100 percent of voting booths in operation. “There’s something to be said for the fact that the electoral processes went relatively smoothly on election day,” Zissis says.

AS/COA Online: Were there any surprises in yesterday's elections?

Carin Zissis: Morena’s coalition lost seats in the lower house of Congress, where all 500 seats were up for grabs. What's important about that is the coalition is going to lose its two-thirds majority that allows it to make constitutional changes. To some degree, it’s not such a great surprise. Every ruling party going back more than 20 years has lost seats in midterms and polls were indicating that it was likely that the Morena coalition of President Andrés Manuel López Obrador, or AMLO, would lose seats. However, they lost more than expected and what’s also surprising is that one of Morena’s allies, the Green Party, earned more seats than predicted. That gives the Green Party a lot of power because if it decides to leave the Morena coalition, it could be wooed by the opposition and give it greater control of the lower house. Still, Morena will remain the party with the largest number of seats in Congress.

I would say that the biggest surprise is the results in Mexico City. The capital has been considered a stronghold for Morena, the party of AMLO, who was, of course, mayor of Mexico City. But his party lost at least nine of the 16 districts in the city, so that is seen as the part of the country where, probably more than anywhere else, his party was punished. It's also important because the current mayor of Mexico City, Claudia Sheinbaum, was considered a strong presidential contender for the 2024 election. This could weaken her prospects. The city is divided down the middle now with the east mostly supporting Morena and the west clearly punishing Morena.

Why did Morena take a hit in the capital? There are several reasons, but one would be the handling of the pandemic and another would be the May Metro collapse, viewed as the result of government neglect, in which dozens of people died and were injured.

AS/COA Online: What are some of the constitutional changes that AMLO will find it harder to make now?

Zissis: AMLO has a statist approach, particularly when it comes to the energy sector, but his party has also sought to make changes to the judiciary and to autonomous institutions—including the electoral agency.

Knowing that most of the time the governing party loses seats in midterms in Mexico, the party did seek to usher through a number of constitutional changes ahead of the election. The results are going to put into doubt just exactly which reforms will be implemented. While Morena will still be the party that holds the largest number of seats, it’s now going to have to negotiate with the opposition in order to get what it wants.

AS/COA Online: It has been a very violent campaign season, with nearly 100 candidates assassinated. How was the election process yesterday?

Zissis: Tragically, this campaign cycle was marked by violence. But the good news—and you could even argue another surprise of this election—is that things went pretty well. More than 99 percent of the voting booths and voting centers were able to operate. That's not to discount that the campaign season was very violent, which affects how people select candidates. And violence did rank as a top voter concern. But there’s something to be said for the fact that the electoral processes went relatively smoothly on election day.

In fact, one of the great things to see is that turnout was at about 52 percent. That is higher than in the last midterm elections of 2015 and higher than in any midterm elections this century. Remember that voting is not mandatory in Mexico. It's positive to see a higher level of participation in the elections and people showing up to vote. And for this to happen in the middle of a pandemic, which you would expect could restrict voting, has been another surprise of the election and a nice one to see.

AS/COA Online: How much will the results of this election be read as a referendum on the first three years of the AMLO presidency, and what do they tell us about the next three?

Zissis: I think they are definitely being read as a referendum on the last three years, which make up the first half of AMLO’s six years in power. We can’t forget that in 2018, AMLO and his party rode in to power on what was frequently described as a tsunami because the party really won across the board in key votes and swept the elections.

But we also have to keep in mind that, again, Morena is still the party that will hold the most seats in Congress, and something that is also true is that Morena did quite well in the gubernatorial races. Fifteen states—nearly half of Mexico—held gubernatorial races and preliminary results give Morena wins in at least 11 out of those 15 states. Governors are very powerful in Mexico, so that’s not something to be ignored and the results demonstrate Morena’s ability to mobilize voters on a local level. We also have to keep in mind that there were roughly 21,000 seats up for grabs overall in this election, many of them in local races. We’ll still have to see how those state legislatures shape up. No matter the results, Morena will continue to be a strong political force in the country.

AS/COA Online: What comes next?

Zissis: In Mexico, as soon as the midterms end, we start looking ahead to the 2024 presidential vote, and you can never start too early on talking about who the next president will be. We should also keep in mind that AMLO himself is planning to hold a referendum on his presidency next year in 2022.

It just so happens that as these election results are coming in, U.S. Vice President Kamala Harris is visiting Mexico. In terms of bilateral relations, the focus is primarily on migration and security. But these midterm elections were so huge and so important in Mexico that they have overshadowed the vice president’s visit. On the other hand, the vice president herself has said that this trip is like a fact-finding mission. This is not something where they’re going to accomplish everything within a few days—it’s the start of something. Given that it’s Vice President Harris’ first international trip, it’s meaningful that she is visiting Latin America and is including Mexico, a neighbor.