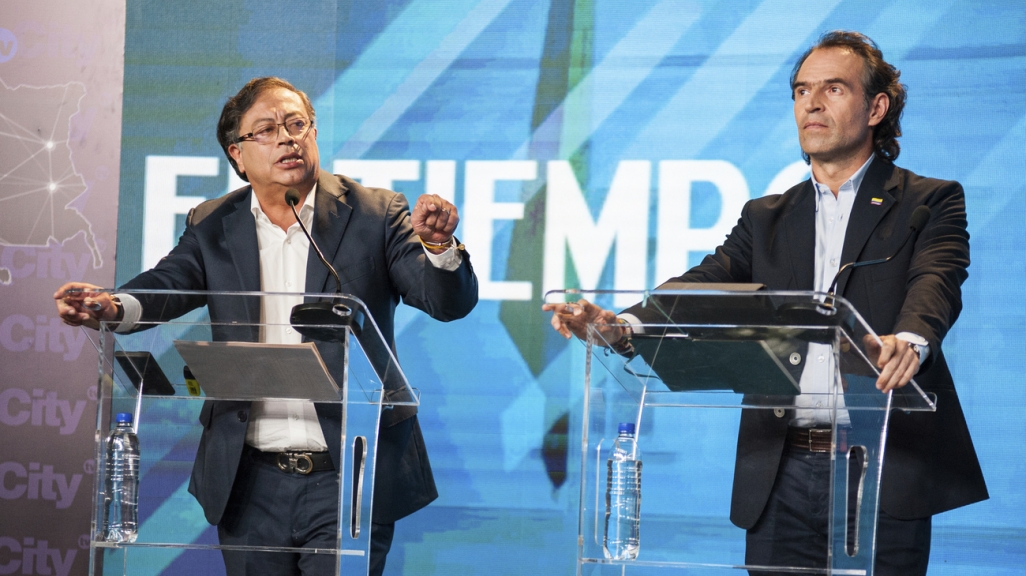 The award-winning journalist talks candidates, previews the runoff, and explains why Colombian voters want a change from the status quo.

Colombians vote May 29 in the first round of the country’s presidential election. What looked like a two-horse race between frontrunner Gustavo Petro and Federico “Fico” Gutiérrez has now been pried open by the rise of independent anti-establishment candidate Rodolfo Hernández.

The uncertainty surrounding the outcome coincides with high levels of voter discontent. Roughly 80 percent of Colombians are dissatisfied with their country’s democracy, and recent years’ protests show concerns about inequality. “Even taking into account that Colombia's economy is growing at a very fast pace, there is this feeling that there was a party and a large percentage of the population was not invited,” explains El Tiempo Senior Analyst Ricardo Ávila Pinto. The economist and award-winning journalist also details what it would mean for the country’s stability if frontrunner Gustavo Petro loses and doesn’t accept the results.

AS/COA Online sat down with Ávila Pinto to go over the current state of play.

See how the competition between presidential hopefuls is shaping up ahead of the May 29 first-round vote.

AS/COA Online: Since the primaries in March, polls have consistently shown leftist Gustavo Petro and the center-right's Fico Gutiérrez as the main contenders in this race. But now, we’re seeing big gains for an outsider, anti-establishment candidate: engineer and businessman Rodolfo Hernández. Why are we seeing this late shift, and what does it mean for the first round?

Ricardo Ávila Pinto: The first conclusion is that this is not going to be decided in the first round, and that we are going to have a second round on June 19. And second, it shows clearly that people are tired of the “same as usual.”

In that sense, Hernández’s recent strength can be interpreted as the attractiveness of someone who is perceived as an outsider. Part of the citizenry would like to see different faces in power, regardless of how concerning their agenda could be. They want a fresh figure, even if this fresh figure in this particular case is almost 80 years old.

AS/COA Online: Younger voters in particular seem drawn to Hernández. Why is that?

Ávila Pinto: He has been very successful using social media, using TikTok, Twitter, Facebook, and Instagram, to send his message. That allows him to express his message in a very concise way without getting into long explanations about what he would do if he was elected president, basically appealing to emotions and popular feelings. The first part of his message is that there is enough money in Colombia around, but the problem is that this money is stolen from the public coffers. The second is that the state is inefficient because there are a bunch of civil servants who don't perform their jobs and that Colombia needs a leader who has been a successful entrepreneur and who is rich, so he won't be corrupt.

That message, as simple as it sounds, is appealing to some people. Of course, we'll see on May 29 what percentage he gets, but it is clear that he is the dark horse in the race at this point in time.

AS/COA Online: Petro is still very much the favorite to win this race. What’s propelling him to the top? Why might this be his moment?

Ávila Pinto: Petro needed to polarize the race. In that sense, what he needs in the second round is to have Federico Gutiérrez as his opponent because Gutiérrez represents continuity. Although he has denied the charge, Gutiérrez is seen as the person who inherits uribismo, which has been the main political force in Colombia during this century until today, as former President Álvaro Uribe has become a very unpopular figure. Because of that, Petro is able to polarize the race and present himself as someone who really represents the wishes of the people, who will be able to change a deeply unequal society.

Of course, he presents solutions that are very attractive, although most of them have been written in the manual of populism. The main concern is what will happen to a country that so far has been recognized as a beacon of fiscal responsibility if Petro is elected and puts in motion some of his proposals.

AS/COA Online: Petro has raised questions about electoral manipulation. Some people are saying he might not accept the results. To what extent are his claims valid?

Ávila Pinto: What he's doing is basically a kind of double speak. First in the sense that he expects to win, and he's behaving as if he's going to be the next president. But, just in case he doesn’t, he's undermining confidence in the electoral system. If in the end we have a very close race in which he loses, that will create trouble for his opponent.

It’s a very dangerous game. He even said that a coup was in the works, which was totally irresponsible. But again, the message is an implicit threat against the winner, depending on how the results look. If we have, let's say, 51 to 49 percent result in the second round of the elections, I'm sure that Petro will try to create some havoc. We'll see what happens.

AS/COA Online: In other words, it's Petro’s path to claiming a win?

Ávila Pinto: Yes, and at the same time, it is clear that if he loses, he loses. But he will become a major disruptive force for the new government. That creates concern about Colombia’s stability. If we, during the Duque administration, had two very large national strikes, imagine if Petro can convince a large part of the population that the election was stolen from him. What will social unrest look like in Colombia over the next four years? And that is a very concerning scenario.

The Evolution of Colombia’s Gustavo Petro

The former Bogotá mayor is making his third run at the presidency and is leading in polls. Has he changed, or has the country?

AS/COA Online: How have recent years’ protests shaped this election?

Ávila Pinto: They show the dissatisfaction of some particular sectors of society, beginning with young people who are the victims of very high unemployment and very few opportunities. This situation was exacerbated by the pandemic. And, sadly, the response of the present administration wasn't ideal. Even taking into account that Colombia's economy is growing at a very fast pace, there is this feeling that there was a party and a large percentage of the population was not invited.

So even good economic times increase resentment against those who are doing well. We have to remember that the latest reports show that Colombia’s poverty rate is above 39 percent. That's a very high number that explains in part why Petro has such a strength, because again, he promises that he will address these inequalities and the lack of opportunities that have affected Colombia for so long.

AS/COA Online: We've been talking about Petro and Hernández, but still polling in second is Fico Gutiérrez, who many see as a continuity candidate. What would a Colombia under Fico look like?

Ávila Pinto: The big question is whether he has the leadership capabilities to calm things down and that is a question that is impossible to answer because for that to happen, he needs to be in power. He is a politician that is close to apolitical. And in that sense, he has that advantage that he's very good at retail politics—walking the streets. Most of his political career was constructed like that, and he was very successful doing that.

But again, if he's elected, he will confront a very harsh opposition that will take to the streets. We will see continuous protests in the streets, and the question is: can he disarm the movement? Can he deal with security in a capable way? Will he be able to name a team that is capable—in terms of security, in terms of economics, in terms of social policies? Having the answers is impossible at this point in time, but it's not going to be an easy job for him if he wins the presidency because he will inherit a country split in two.

Of course, for Petro more or less the same thing will happen. Petro won't have it easy either. That is why, in either scenario, things for Colombia look very complex.

AS/COA Online: President Duque granted Venezuelan migrants Temporary Protected Status. How do you view the future of relations with Venezuela under these candidates?

Ávila Pinto: We know what they have said so far. First is that Petro would establish diplomatic relations with Venezuela while Gutiérrez would continue the policies that Duque started.

But it is absolutely clear that the reality is not the same as it was in 2015 or 2016. And in that sense, Colombia has to establish some sort of channel in order to have dialogue with Venezuela, even if at the consular level, because we have 2 million Venezuelans living inside of our borders. Colombia has been generous, granting asylum and work permits. I believe that was a very good decision on the part of Colombia, not only for humanitarian reasons, but also for economic reasons in order to open up a country that for decades was one of the most closed in the world in terms of immigration.

I believe that change is positive, but at the same time, Colombia has to remember what Lord Palmerston said 170 years ago in the British Parliament: that a country has no permanent enemies, but permanent interests. And it is in the interest of Colombia to have at least some communication channels established with its neighbor.

AS/COA Online: In your view, is there an issue that isn’t getting the attention it deserves?

Ávila Pinto: No. The big question is what's going to be the difference between what the candidates have said in speeches and what they will do. There is this huge question mark about what's going to happen. There is another big question mark regarding how international relations and how geopolitics are going to be influenced by the results of the election. If Petro wins, will he lean more towards China? What will Colombia's approach toward Russia be? What will happen with U.S.-Colombia relations? All these things are on the table as we approach the date of May 29.

Will the country change political course? Ahead of the May 29 first round, we look at the top presidential candidates.