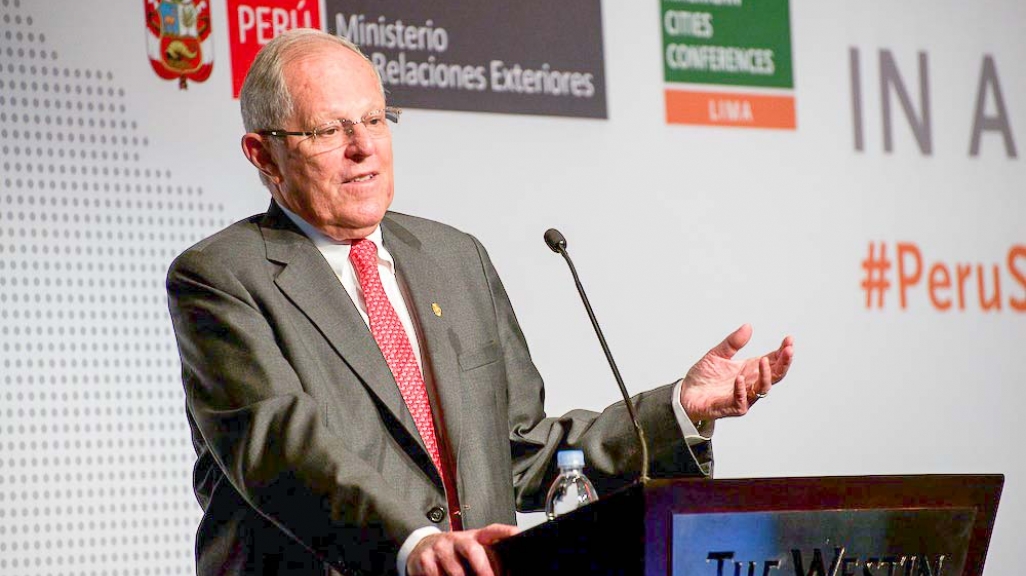 AS/COA President and CEO Susan Segal began the 2017 Latin American Cities Conference in Lima by welcoming the audience. She remarked that, when thinking about the Peru of today, three words come to mind: opportunity, growth, and leadership. She commended President of Peru Pedro Pablo Kuczynski for his leadership on both national and hemispheric levels and noted his administration’s attention to gender diversity—a third of his cabinet members are women.

The president then delivered his keynote speech, identifying pollution, urban planning, and water as major issues in the capital, where a million Peruvians live without running water. His remarks covered a range of topics, from plans for improved metropolitan mobility to incentivizing electric automobiles over gas cars.

The IMF’s Western Hemisphere head Alejandro Werner spoke on the economic outlook for Peru, highlighting the country’s ability to maintain low inflation figures and some of the highest economic growth rates for the region, making it an attractive destination for investors. He also noted that the IMF has forecasted 2.7 percent GDP growth for Peru in 2017, but warned of a need for greater investment in infrastructure to improve productivity.

During the first panel of the day, members of the private sector and government agencies discussed how to put companies’ enthusiasm for sustainable development and impact reduction into practical terms. For PepsiCo's Luis Montoya, it’s important to quantify business goals when talking about plans to reduce community and climate impact, and connect these goals with companies' leaders rewards. Montoya, Elena Conterno of Perú's National Fishing Association, and German Jiménez Vega of Pluspetrol Perú talked about different strategies their sectors are adopting to replace fossil fuels with renewable energy while mitigating impact. One important aspect for efforts to result in more sustainability and more competitiveness is transparency; without rule of law, said Jiménez Vega, it is hard to keep the game fair in the private sector.

.@econterno: the biggest challenge is to anticipate possible scenarios and how they affect our resources. #PeruSostenible https://t.co/TGNQFfntoy

Minister of Transportation and Communication Bruno Giuffra spoke about the state of Peru’s infrastructure and development and investment projects underway today. Peru has enjoyed 12 years of economic growth but does not yet have the infrastructure to show for it. It has one of the highest logical costs in the region—34 percent—and by 2025 the infrastructure gap will cost the country $58 billion.

Plans to ameliorate these deficits are far-reaching. For ground transportation, they consist of refining the central highway systems, establishing new truck centers, and building new railways. Maritime infrastructure is also getting a revamp, with five of Peru’s major ports receiving power upgrades. Air transport use will benefit from modernized airports and heightened regional accessibility. Peru is also digitizing, with 90 percent of the population using cell phones and 66 percent of families accessing the internet.

The following panel looked at financing resilient infrastructure. Moderator Carlos Pareja, Peru’s ambassador to the U.S., opened by asking panelists to define resiliency. Resiliency isn’t just a quality but an entire system, said CAF Peru’s Eleonora Silva. J.P. Morgan’s Fuat Savas, elaborated on some of the various angles to resiliency, including functional resiliency (can the structure withstand climate-related events), financial resiliency (what’s the return on investment), and competitive resiliency (making sure the structure built five years ago is still functional today). One of the people carrying out an array of such projects is Pablo de la Flor, head of the Peruvian reconstruction authority. He highlighted the $8-million worth of projects going toward preventive resiliency projects alone. Alberto Ñecco Tello talked about a recent roadshow ProInversión Peru took to China, which, he said, was already bearing fruit and generating interest in financing infrastructure projects in Peru, especially those related to mining. Scotiabank Peru’s Gonzalo Gil echoed the importance of such roadshows, as they show transparency to potential investors.

In closing remarks, Prime Minister of Peru Mercedes Aráoz Fernández underscored the importance of the conference theme of sustainability, pointing out that Peru is the third-most vulnerable country in the world to climate change effects after Bangladesh and Honduras. She also touched on major domestic policy issues for the administration, ranging from corruption to water access, emphasizing that the government is seeing development for Peru and all its citizens.