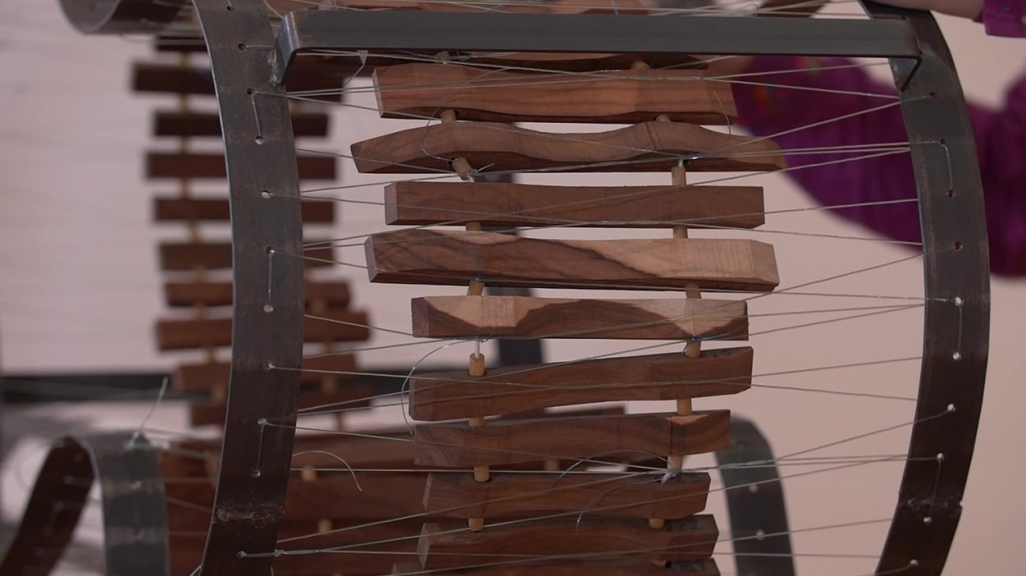 The exhibition Joaquín Orellana: The Spine of Music is on view at our gallery until April 24.

This week of En Casa (At Home) is dedicated to four pieces by Guatemalan composer Joaquín Orellana, while Recuerdos (Memories) revisits the U.S. premiere of his second string quartet, performed in our hall by Momenta Quartet in 2016.

As the first exhibition dedicated to Orellana's work in the U.S. continues in our Visual Arts gallery, we asked the composer to select a few of his electronic pieces to highlight in our daily series, alongside the video version of his Americas Society-commissioned Efluvios y puntos, directed by Adele Fournet and currently part of the exhibition and a video of a his second String Quartet. We commissioned artists Iraida Cano and Juan Carlos Yanaura to create new online versions of Imposible a la X (1979) and Metéora (1968), and thank the Montreal-based Fondation Langlois for sharing their visualization of Humanofonía I (1971).

One of the most influential living members of Latin America’s musical avant-garde, Joaquín Orellana (b. Guatemala City, 1930) was a fellow at the Centro Latinoamericano de Estudios Musicales (CLAEM) at the Instituto Torcuato Di Tella in Buenos Aires in 1967–68. During his time at the CLAEM, he encountered contemporary avant-garde innovations and became particularly interested in electronic music, then in its infancy. When he returned to Guatemala in 1968 and found the latest technologies were unavailable, he decided to invent alternatives in order to recreate the sound-world he imagined after his experiences in Argentina. The series of instruments he created became an analog solution for achieving electronic-sounding musical materials and at the same time established a cultural identity for Guatemala within Latin America. In 1972 he designed and built the Sonarimba, the first of his útiles sonoros (sound tools), which is, like many of his subsequent inventions, based on the marimba, Guatemala’s national instrument. The unique design of Orellana’s útiles makes them function not only as innovative musical instruments, but also as sculptural objects.

Efluvios y puntos (Outpourings and Dots), commissioned by Americas Society and composed by Orellana in 2019, is written for four performers who play 34 útiles sonoros and sing. It also includes an active part for the audience, which is instructed to scream, howl, and weep in an invented language at precisely indicated points. The interplay of the materials from which the útiles are built (wood, metal, bamboo, plastic) and the particular modes in which they are played (e.g. dragging a mallet over a multitude of wood or bamboo segments, using a bow over metal tubes or sheets to create sustained tones, etc.) define the overall shape of the piece. This instrumental array is in constant dialogue with the voices of performers and audience.

When it became clear that the pandemic would not allow us to have live performers in our gallery interacting with an audience, we decided to create a three-channel video of one performer (Music Director Sebastian Zubieta) playing all the instruments, with the audience vocal parts performed by Americas Society colleagues. Adele Fournet directed and edited the video, and the sound was recorded and mixed by our longtime sound engineer Bill Siegmund. This video is a one-channel version of the piece, which is part of Joaquín Orellana: The Spine of Music, on view until April 24 at Americas Society.

At the end of his second year at the CLAEM, in November 1968, Orellana premiered Metéora, an electronic piece based on piano sounds created completely in the studio, which was presented in concert without the intervention of live musicians using a reel-to-reel tape player. The piece was the composer’s first purely electronic piece, and likely also the first by a Central American composer in the medium. Orellana was very proud of having discovered a novel way to record and work with the sound of the piano, revealing an evocative "vocal" quality (he talks about "voces inauditas") that reimagine the chants hanging among the famous Greek monasteries in the titular city. The sounds were processed at the CLAEM's state-of-the-art studio, which was run by a dedicated and knowledgeable staff that included composer Francisco Kröpfl (1931), whom Orellana still considers the most significant teacher he met during the fellowship.

Peruvian video artist Katoshi (Juan Carlos Yanaura) created a magical 3D landscape that responds to the evocative images conjured up by the piece. Katoshi is a video designer for plays, musicals, contemporary dance, concerts, and other live events based in Lima. He has worked with Peru's National Ballet, Chorus, and Folkloric Ensemble of the Gran Teatro Nacional. His visuals for Pauchi Sasaki's live shows were presented at the Philip Glass Days and Nights Festival, the Rolex Arts Weekend, LA Phil, and Les Créatives Festival, among other venues. He also created and directed the video for Pauchi Sasaki's k'uku, which premiered in our series in 2020.

Humanofonía I provides a fascinating take on the human voice. The piece, created in Guatemala in 1971, is the first in a series of works grouped under the name Humanofonías. This version includes sounds of joy, cries, sobs, prayers, Indigenous words, etc. [It] combines environmental sounds and a poem by Julio Fausto Aguilera (also Guatemalan), recited in the middle of the piece. The effect is irregular, but essential. The piece bursts into the subconscious, vividly penetrating the ear. Its somber architectural vision evokes the prisons designed by Piranesi. Orellana infused an ethnographical document with a poignant compassion towards humanity, in an unusual context. (Adapted from a text by Julio Novoa, published in the Montevideo daily La Mañana, provided by Orellana in 2004.)

You can listen to the piece and follow its shape here.

Subtitled “Frater Ignotus” (Unknown brother), Orellana's Second String Quartet, premiered at the end of Orellana's first year in Buenos Aires in November 1967, marked a departure from his pre-CLAEM compositions. The musical language is distinctly post-Bartók, with a clear structure and intense treatment of melody and harmony: it is a prime example of the singular transformation of the Guatemalan composer’s musical style during his time at the Di Tella.

Our friends of Momenta Quartet gave the U.S. premiere of the piece in 2016 in a concert dedicated to the figure and music of Alberto Ginastera, who directed the CLAEM.

The title of Imposible a la X, composed in 1979 came from "considering that peace is 'impossible to the Xth power,'" says Orellana. "It was inspired in a military siege, but, as much as possible, I made the piece as devoid of aesthetic ornamentation as I could." The piece starts with an explosion that returns at several moments, and juxtaposes a variety of source recordings, including voices, percussive sounds, string instruments, and the omnipresent sounds of the marimba. In the process of creating it, Orellana feels that he started to "see with his ears" as a way to become more sensitive of his acoustic surroundings. Orellana started as a very subjective composer, fascinated with the middle ages and the occult, but his art became gradually more political. He did not release Imposible "until after the fall of Lucas' dictatorship (1982), because [at the time] one could be detained by even looking to the left."

Spanish artist Iraida Cano created the new video. Cano has shown her work, which often deals with nature conservation, in traditional settings and as interventions in protected and degraded natural spaces, including parks and abandoned mines and quarries. Her work can be seen at the natural space Finca El Arreciado, close to Toledo, a venue where she is also Artistic Director. She met Orellana in Madrid in 1988, when she participated in his work Híbrido a presión II at Centro Cultural de la Villa. In 1990, Cano created the sets for the play La Profecía by Manuel Corleto with music by Orellana, presented in Cadiz and later in Paris. In 1992, she traveled to Guatemala to prepare the sets of Orellana's opera En los Cerros de Ilom. Her video for Imposible a la X includes a number of her own images creating a possible vision of the sought-after peace. 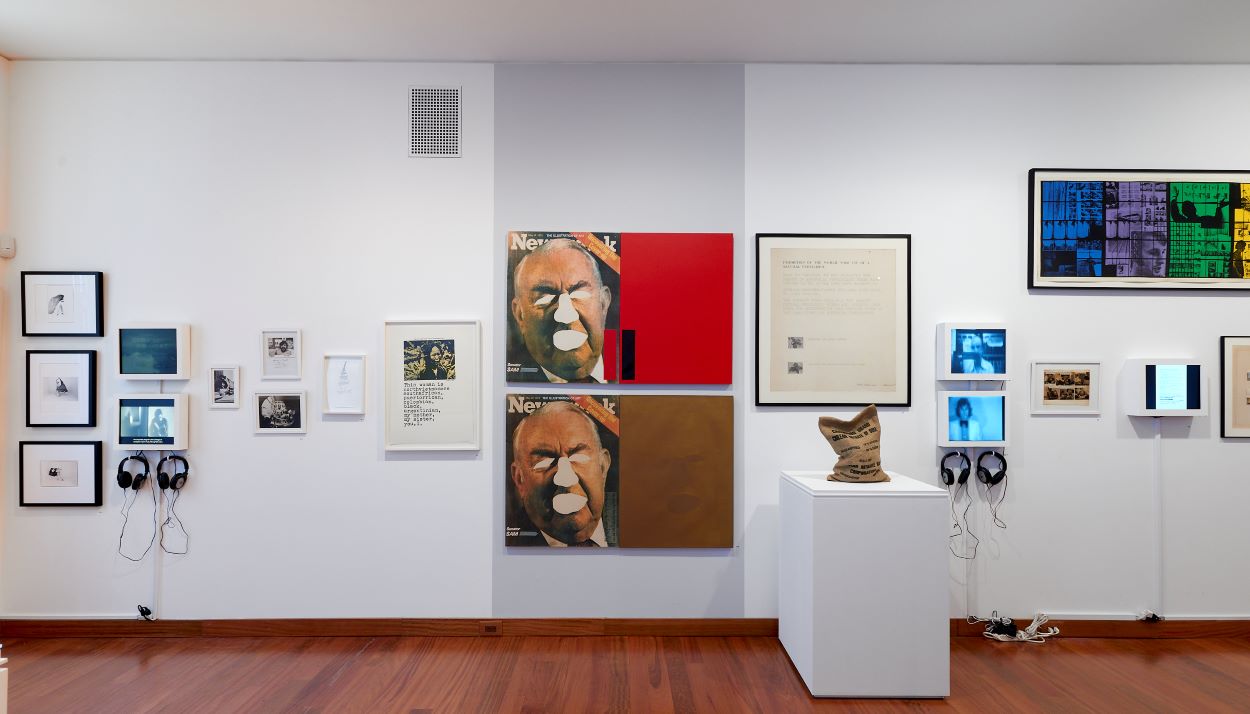