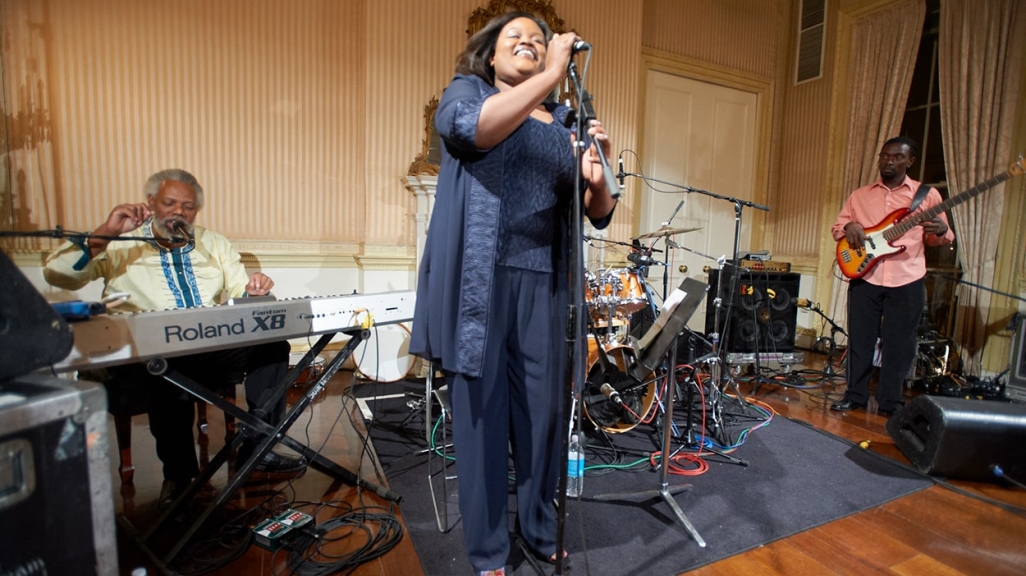 Music of the Americas: Piano, Reggae, and Peruvian Pop

En Casa is back with Leandro Rodríguez Jáuregui and Andrés Wurst, while Recuerdos takes us back to a 2011 reggae concert from Ibo Cooper.

Argentine pianist Leandro Rodríguez Jáuregui, who was on Music of the Americas in 2015, sent us a video of music by Ernest Bloch from Buenos Aires.

Recuerdos continues our review of the reggae concerts we presented in 2011. This week we revisit the Valentine's Day performance by Ibo Cooper and a group of young Jamaican musicians.

En Casa continues the series with another of the videos by Andrés Wurst and his band.

Argentine pianist Leandro Rodríguez Jáuregui was on Music of the Americas in 2015, for the U.S. premiere of Esteban Insinger's Hércules en el Mato Grosso chamber opera. After completing a master's in piano performance at NYU, he returned to Buenos Aires, where he performs and teaches. He sent us his version of Ernest Bloch's "Five Sketches in Sepia," which Bloch wrote in 1922 in Cleveland while director of the city's newly established Institute of Music. Bloch was born into a Jewish family in Geneva in 1880 and died in Oregon in 1959 after an illustrious international career as a composer and extraordinary music teacher. In addition to Cleveland, he was the first composition teacher at Mannes in New York and directed the San Francisco Conservatory. "Five Sketches" is a collection of evocative miniatures with rich impressionistic overtones.

Ibo Cooper has spent more than forty years playing reggae around the world. As a member of Third World, Cooper opened for Bob Marley and released numerous albums, including the legendary 1977 album 96 Degrees in the Shade, which includes the hit "1865 (96 Degrees in the Shade)," dedicated to the memory of Paul Bogle. Also a veteran of Inner Circle, Cooper embarked on a second career as a teacher, and is currently head of the Caribbean, Latin American, and Jazz department at the Edna Manley College of the Visual and Performing Arts in Kingston.

He was on our stage in 2011, when he joined forces with a new generation of musicians to create a vibrant sound and fresh take on 50 years of Jamaican music, ranging from mento to dancehall. The group demonstrated the enduring power of their country’s popular music as well as its ever-increasing potential to electrify and engage people everywhere.

Since that show was on Valentine's, we share Rodgers and Hart's "My Funny Valentine," beautifully sang by Henry.

Andrés Wurst, Jorge Alonso, Malen Gardenghi, and Alvaro Isla are back with the laid-back "Ritmo de a dos," featuring lovely solos by Alonso and Isla.

Ibo Cooper's concert was supported in part by the National Endowment for the Arts and the New York State Council for the Arts.