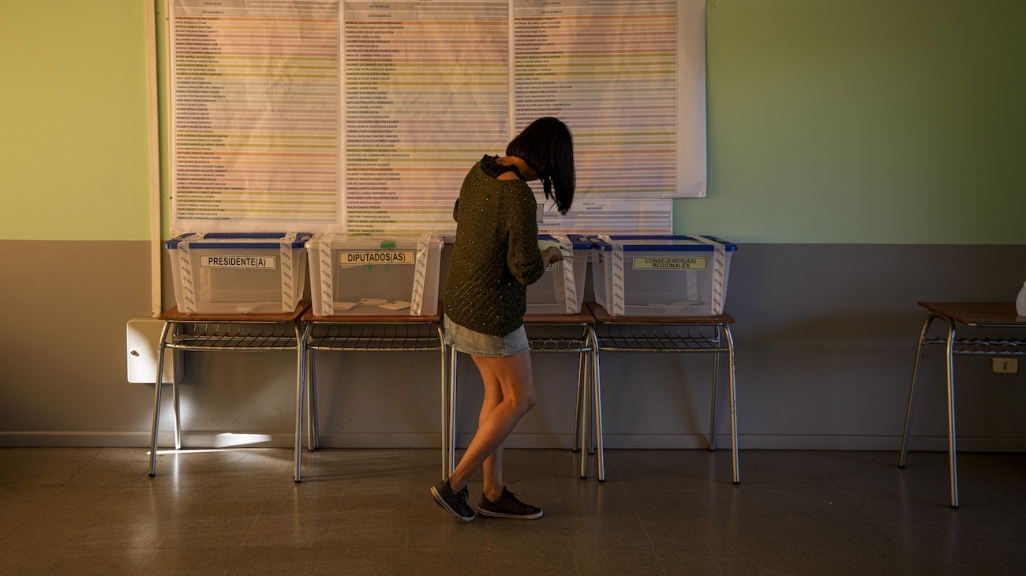 A woman votes in Chile. (AP)

LatAm in Focus: The Democracy That Chileans Want

Elections always have their surprises, but the third-place finish of Franco Parisi in Chile’s November 21 presidential first round caught many particularly off guard. A political wildcard, Parisi campaigned via Zoom and YouTube from Alabama, having not set foot since 2020 in Chile, where he faces a court order to pay over a quarter of a million dollars in child support and alimony. Now, the two candidates vying to win the December 19 second round—José Antonio Kast on the right and Gabriel Boric on the left—are courting his 900,000 supporters, as well as those of the rest of the also-ran candidates.

But in a country where three-quarters of children are born to unmarried parents and half of mothers are raising children solo, reaching out to Parisi’s supporters risks alienating Chilean women of all stripes says journalist and professor Paula Escobar Chavarría in this interview with AS/COA Online’s Holly K. Sonneland.

Escobar, a CNN Chile host and La Tercera columnist, says both candidates are making pivots to the center during the runoff phrase of the campaign. Ahead of the first round, Kast proposed replacing the Ministry of Women and Gender Equality with a “Ministry of Family,” granting more state benefits to married women instead of single mothers and eliminating Chile’s National Institute for Human Rights. In a campaign event on December 2, he withdrew the two gender proposals and apologized to women. He did the same regarding the human rights institute on December 7.

Boric, meanwhile, has hired a new campaign manager, retooled his economic team, and started talking more about crime and security, which had previously been absent from his platform.

“I hope that … [we] can build a more equal society, but without destroying what we have.”

Changes aside, for the first time in decades, many Chileans feel like “orphans” with no political home, given that neither runoff candidate hails from the traditional center of the spectrum, says Escobar. That said, she doesn’t qualify the candidates as equally extreme on their respective ends of the spectrum. “People in Chile, they really want transformation. They really want change, really want to have more social rights and less inequality. But they want that done in a way that is not scary,” she says. “They need to have some kind of certainty that … all these changes are going to be done in peace and with some kind of order.”

For Escobar, the 2021 presidential race, which is taking place while a Constituent Assembly drafts a new constitution and two years after massive social unrest, carries the same gravity of the first election she ever voted in: the 1988 plebiscite that ultimately led to the end of Pinochet dictatorship. “I really know what Chile was like when we didn't have democracy, [what] it was like to live in dictatorship,” she says. “With all the things that we don't like about how democracy is now in Chile, we have to treasure having a democratic system.”

Sophia Mancilla produced this episode. The music in this podcast was performed at Americas Society in New York. Learn more about upcoming concerts at musicoftheamericas.org.